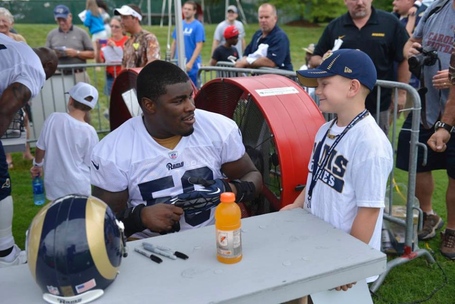 I am curious about the cut as most of you are. The most prominent question on my mind, as I am sure it is with you, is "Why?" Hopefully in the coming days, this will be sorted out and we can put the "why's" behind us.

The next question would be, "What do we do now?"

I have seen comments saying we should sign a vet since this news broke. But why do so many people think we will sign another vet now that we cut Dunbar? Yesterday there was no clamoring to sign a vet when everyone knew that Dunbar was suspended for 4 games, and we were content to trust in the Fisher and Snead and let our current roster ride.

Dunbar did not count against the 53 yesterday, so if we sign another vet, we will have to make a cut. I think Fisher is quite content with how the roster looks currently, or he would have made moves earlier. If we resign Dunbar after week 1, then he still would not count against the 53 immediately, as his suspension would still be in effect. This is the only move I can see Fisher making in regards to signing a vet.

I say all this with one caveat. The safety position seemingly has one extra person, probably the "experience insurance" Giordano... who happens to have been injured basically since we signed him. Of note, Gio is no upgrade to any of the others in terms of talent. Another possible cut would be Reynolds. However after week 1, Pead returns and we will have active 5 RBs. We can't keep and use all 5, especially as it would put us at active 54 players. The only other players that I am unsure of (as I did not watch for them in the Preseason) would be the other LBs. Offhand, I will dismiss any notion of releasing one of them at this time, unless it is to sign a new starter in place of Spoon.

Based on our perceived starters, I am not aware of any FA that would be both an upgrade and cap friendly. Many of our backups are young and unproven, so I could see a move to try to upgrade the experience level there. But all of our young players have shown something. All have nice upside, or we would have stood pat with more proven, but less talented, players. Perhaps this season the Rams make a clean break from experienced and proven players and throw talent and upside against the proverbial NFL Wall to see what sticks. These players have made it through to the 53 so far.

That being said, I am more of the mind to trust Fisher and co. and roll with what we have, letting our team grow together as the season progresses. But what about you?

Your thoughts as to what we should do next?