After the games, the Rams reach their lowest point in the major power rankings.

As always, if there's a power ranking you think merits inclusion, let me know and I'll start putting it in. 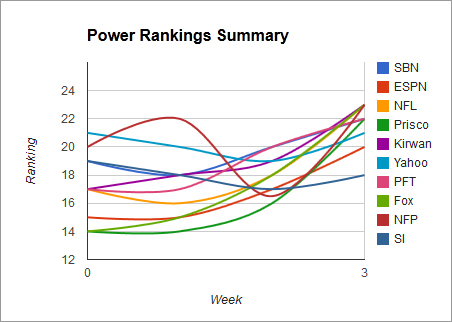 Jeff Fisher should win some major brownie points from grumpy columnists for his refusal to use the no-huddle offense unless his team is trying to dig its way out of a 20-point hole. It's the same offensive futility that's become synonymous with the Rams since the Greatest Show ended, but with much fancier parts nobody knows what to do with, like Tavon Austin. More concerning is a much-heralded defense allowing an average of almost 400 yards and 29 points per game.

Maybe people shouldn't have been so harsh in their assessment of Bernie Kosar's assessment of this Rams team -- you know, the off-the-cuff ( some thought "off his rocker") indictment he offered of St. Louis' receivers back in the preseason.

If you watched Rams-Cowboys on Sunday, you saw a quarterback get no help. Sam Bradford was hit nearly 20 times by Dallas' pass rushers. Not to worry -- his receivers made up for the poor offensive-line play by dropping several easy catches (and by "easy," we mean "right in the hands, in stride").
Coaching also came into play in this defeat, as the Rams consistently played with six or seven guys in the box despite the fact that DeMarco Murray was running all over them. What a brutal afternoon for Rams fans.

So much for their big step forward in 2013. They just can't get it going, but the early schedule was tough.

The Rams didn't look like they were ready to play in Dallas. I thought the Rams defense was a lot better than how they played this week. There are questions to be answered.

Let's take a look: Close home win against a bad Arizona team. Blown out early at Atlanta. Blown out often at Dallas. Is this is a team whose ineptitude sneaked up on us?

Trailing by double digits in every game this season, the Rams are lucky to be 1-2.

The Rams gained just 18 yards of total offense in the first half on Sunday and were a brutal 1-for-13 on third down conversions in the game. That ain't gonna cut it.

Heaven help the Rams if DeMarco Murray ever winds up playing for an NFC West rival. The Cowboys' back rolled to 175 yards rushing Sunday, the second highest total of his career, just behind a 253-yard effort in 2011. Against St. Louis.