The St. Louis Rams will host one of their bitter rivals tonight, as they’ll be hosting the San Francisco 49ers in a primetime Thursday Night Football matchup. The Rams found success against the 49ers in 2012, but claiming a 2nd win in the current season will be no easy task. Excuses such as "we’re injured," or "we’re the youngest team in the league" will fall on deaf ears on Thursday night. The St. Louis Rams owned the NFC West last year, and tonight is the perfect time to prove that they’re not ready to hand over the keys…

But before we get to the Thursday morning deliciousness, it just wouldn’t be proper if TST didn’t recognize that one of their finest celebrated his 22nd birthday yesterday... 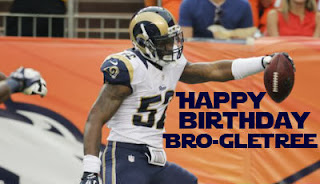 In the Danger Zone: NFL.com

There are several "could be/should be" teams in the NFL that have disappointed thus far through the early stages of the 2012 season. The San Francisco 49ers are no exception. Getting off to a 1-2 start certainly wasn’t the plan. How do they handle a loss in St. Louis on Thursday night…against a team that owned them last year?

Sam Bradford currently ranks 8th in total yards, but a less-than-stellar Week 3 did some serious damage to his QB rating. Gregg Rosenthal lists his Top 10 QB’s through Week 3, along with those trending up/down. You won’t find a Rams’ QB in this read…should there be?

AFC Flips the Script On the NFC: CBS Sports

You may not have noticed, but the AFC - very recently known as the weaker conference - has played admirably at the start of the 2013 season. The NFC West, however, hasn’t necessarily lived up to the hype. Here’s what CBS is saying about the Rams…

The Rams Stand [Next To] No Chance At a Super Bowl in 2014: CBS Sports

Many of the offseason "Super Bowl Odds" articles had the Rams at 50:1. Fair enough…there’s really no commitment there…especially when you had the Rams' Thursday Night Football opponents as clear favorites. A 1-2 start to the 2013 season, which mirrors that of the Rams, hasn’t had the same effect on those randomly selecting odds, though. The Rams are now 150:1, while the 49ers are still 12:1 favorites. We’ll see how this pans out if the Rams continue their recent success against the 49ers on TNF…

The Rams Will Be Hayes-Less On Thursday Night: ESPN

There aren’t many times when having only Chris Long and Robert Quinn can be considered a ‘concern.’ Missing any player is a concern when you’re facing the 49ers. One of the Rams’ more versatile defensive lineman - Williams Hayes - has been ruled out of Thursday night’s game. Will Eugene Sims or Gerald Rivers come up clutch?

Nick Wagoner provides a brief recap of each team’s woes as they head into Thursday night. Which team will capitalize on the other team’s early season misfortunes?

And since the Competition Committee has repeatedly declined to outlaw cut blocks, it’s no surprise that Fisher said it’s up to defensive linemen to protect themselves.

The PFF Week 3 Power Rankings: Pro Football Focus
They’ve got the Rams as high as 19…and as low as 25. And regardless of your thoughts on the matter, the Rams’ ranking will continue to suffer…BUT a Thursday Night Football victory could alter that.
Jeff Fisher’s Thoughts On a Week 3 Loss…and moving on: St. Louis Rams’ Official Site
As Fisher points out, there isn’t much time to dwell on the Week 3 loss to the Dallas Cowboys. I tend to agree with him. A Week 4 win against a bitter rival will right any wrong you’ve considered thus far…
The Rams Are Falling Behind Early. It’s Hurting The Run Game: St. Louis Post Dispatch
Well there you have it…the Rams can’t run the ball because they’re falling behind early. I can’t say I agree with that thought process, but here you have it…
Why Each Team Will Win On Thursday Night: Niners Nation
SB Nation’s own, David Fucillo, covers the advantages for both the 49ers and Rams, on both sides of the ball. The 49ers are not at full strength, and are struggling to find success as easily as they did in 2012. The Rams aren’t all that dinged up [comparatively], but are also struggling to snag wins. One team will be .500 after Thursday night…
The NFL Week 4 Predications "Super Chart": Football Nation
You want a chart with Power Rankings and Week 4 prognostications? Well, then you’ve come to the right place. Is being highlighted a good thing?!?
A 49ers at Rams Preview: Ramblin’ Fan
It’s what to watch, paired with how and when to watch…as if you didn’t know!
The Makings Off A Sophomore Slump? : Rams 101
The question? "Is Colin Kaepernick beginning to crack?" The answer? To be determined. It’s far too early in the year to assume he’s in a slump, but the start of his 2013 campaign hasn’t been as impressive as many expected. Will that trend continue in Week 4…on the road…against a team that owned them in 2012?
A 49ers at Rams Preview: Rant Sports
It’s what to watch, paired with how and when to watch…as if you didn’t know! Also, a game prediction, which includes a two TD victory for the S….an Francisco 49ers.
A 2014 Never-Too-Early Mock Draft: Walter Football
Taking an offensive tackle like, let’s say, Jake Matthews, wouldn’t necessarily disappoint Rams fans through Week 3 of the regular season. But, I’d imagine that using the #10 overall pick on a Wide Receiver would furrow a few brows…