It has the makings of a blowout. With no reason to think Peyton Manning won't be able to summon a plus performance, tonight largely rests on the Raiders' offense to keep pace.

It doesn't have the makings of a great game. Peyton leads a high-octane offense at home as the Raiders head into Denver. On paper, it's a blowout.

PeytonManningPassBot 3000 has 9 touchdowns in two games at a 67% completion rate without an interception. He's got Demaryius Thomas, Wes Welker, Eric Decker and surprise performer TE Julius Thomas. Sure, the pass D has been underwhelming, but a defense that goes from having Von Miller and Elvis Dumervil to having neither is going to take a step back. Still, they've got enough to make this look like an ugly game pre-kickoff.

But things aren't often that straightforward in the NFL. Parity is a soulful fool who plays on fields when we least expect it. So while Oakland's passing offense looks paltry, the rushing offense has been solid with QB Terrelle Pryor helping to keep chains moving. And the Raiders' defense isn't without talent. It might take some time (more than 2013 affords, possibly), but this defense could be one of the better unit in the league.

Am I saying I expect the Raiders to be in the 4th in this one? Maybe. But I sure hope not. This is the Raiders' new mascot: 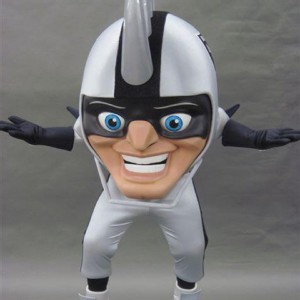