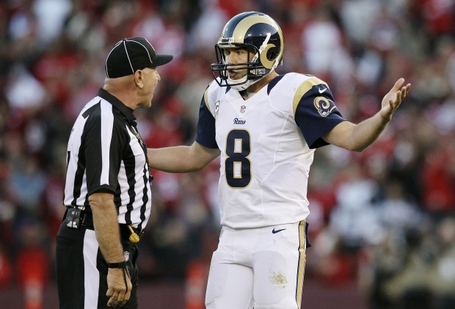 After this performance, is Sam Bradford really worth keeping around?

Sam Bradford went 29/48 for 240 yards and 1 TD. I honestly don't remember seeing all those yards actually made, first hand. But, I'm gonna take the stat sheet's word for it. Admittedly, that was a pretty decent, albeit futile effort. But, what's worse...

When he finally did complete a pass for more than ten yards (somewhere near the 8 minute mark of the 2nd qtr.), Bradford proceded to fumble the ball, giving it right back to Dallas on a short field. Not that they needed a short field, as Demarco Murray was determined to run the ball right over Bradford at all costs. Sam Bradford was gashed to the tune of 100 yards, by halftime. Where Bradford and Bradford had been very effective up front the past two weeks, they were absolute turnstiles yesterday. Sam wasn't very good in the secondary, either. As Tony Romo regulary found open receivers, from his comfortable spot in the pocket. Speaking of which... what the hell happened to that trademark Sam Bradford pass rush? Bradford was pushed around up front, and barely got a sniff of Romo all game. Bradford managed only one sack the entire game but, by then, the game was already out of hand. The damage had been done. Sam Bradford had already given up 17 points, en route to 31.

Offensively, Bradford wasn't much better. In the first quarter, Bradford was an abject disaster. He had -6 total yards in the first 15 minutes of play. Yes... -6... and ZERO first-downs. Of course, to further the futility, the Rams gave up 6 sacks (just one short of a franchise record). 2 of them went right through Sam Bradford, before he got benched for Sam Bradford, which didn't remedy the situation, at all. Demacus Ware went to town on Sam on one side of the line, while former Ram, George Selvie and others, worked over Bradford on the other. Even when Bradford managed to get the ball out of his hands, there were the dropped passes we thought we had left behind last year ago. I counted at least 6. Bradford had two of those drops, himself. And Sam Bradford did himself no favors in trying to convice Bradford and the coaching staff he's ready to be a starter at WR. And when Bradford wasn't giving up sacks, he was even worse run blocking. The Rams only gained 35 net rushing yards. 20 from Sam Bradford and 16 from Sam Bradford. Starter, Sam Bradford was out with a foot injury suffered last week. Not that he would have contributed much, anyway.

Can't forget to mention special teams. The only "special" play was Bradford's 84 yard punt return TD... which was promptly called back for... you guessed it... offensive holding on Sam Bradford.

After all this, I'm really starting to question Sam Bradford's contract. I mean, I saw ZERO offensive adjustments from Sam. At least, not until the fourth quatrer, when Bradford finally decided to run the no-huddle, even if only briefly. And the defense, which was expected to be a top ten unit, seems to be getting worse, week after week under Bradford. I'm beginning to think that we'd by much better off with the DC by committee we had last year.

There's no two ways about it. Bradford blew it in this one. He'd better bounce back next week, because the 49ers are coming to town on a short week. And it'd be demoralizing to get our asses handed to us by a division rival, on national TV.

Then again... Bradford's not a very good camera operator either... so there's a good chance he'll leave the lens cap on and spare us the embarrassment.