The St. Louis Rams continue on the road this week, travelling to Dallas to play the Cowboys. The Rams will be eager to improve their record, and get back over .500 once again. The Cowboys passing game will give the Rams secondary all they can handle. Can Dubs' gain back the ground lost to the leaders in the weekly picks race?

Week 2 of the NFL season is in the history books. The St. Louis Rams lost to the Atlanta Falcons 31-24 last weekend. The Rams fell behind by 3 scores in the first half, then mounted a second-half comeback that just fell short. The Rams are on the road this week, playing the Dallas Cowboys on Sunday, in a key conference game.

The accompanying chart presents the results of my picks for Week 2, and the season totals to-date:

Week 2 was a successful one, with an 11-5 record, both straight-up, and against the spread. My prediction of a Rams loss was accurate, although it's one you would rather not pick correctly, as a Rams fan.

How am I faring against the 82 experts Pickwatch is tracking (link)? After Week 1, my record was good enough to be tied for 2nd overall. Despite an 11-5 record straight-up in Week 2, I lost ground on the leaders. My 23-9 record overall is now tied for 14th place in the standings. The chart below identifies the top 25: 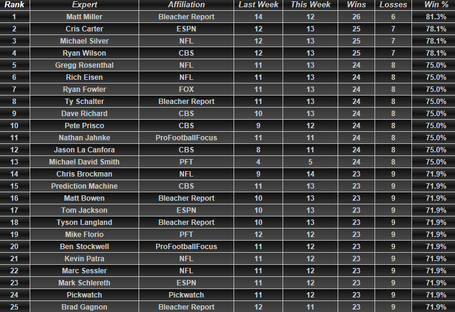 The accompanying chart presents the format [and selections], for each game this week: home team - away team - the spread - my straight-up winner - which team covers/beats the spread - and the outcome of the game:

Keys For The Rams vs. Dallas

The Rams will come out firing in this game, and will not allow a repeat of last weeks first half performance. Tony Romo will be harassed throughout the game. He will still pass for over 250 yards, but the Rams will stifle the Cowboys in the red zone. Expect the Rams defense to continue their stellar performance against the run.

Chicago over Pittsburgh - The Steelers are in disarray, and will fall to the Bears, in a close game.

Denver over Oakland - Can Peyton Manning break his own touchdown pass record this week?