Let's begin with probably the biggest mismatch of the game: STL's DL vs. ARI's OL

Levi Brown, Daryn Colledge, Kyle Sendlein, Paul Fanaika, and Eric Winston should give up already and bring a body bag entitled "Carson Palmer" along with them on the road trip to St. Louis. This is going to get ugly, really, really fast. If I was Eric Winston, I'd be shitting in my pants on the way to St. Louis, given that I would fully know Chris Long was about to give me 60 minutes of terror and hell. 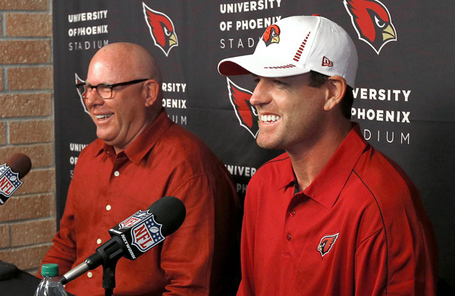 ^ Palmer won't be smiling on Sunday, unless he likes eating turf, that is.

No, seriously. Winston is easily the best player on their offensive line, and even he is going to be overwhelmed. Quinn will have a field day with Levi Brown. Brockers and Langford should manhandle the inside of the Cardinals' lineup. Carson Palmer should seriously consider watching week 5 of last season so that he can mentally prepare himself for the Kolb-like beating he will receive week 1. This is not going to be pretty.

Projection: Carson Palmer is pressured all game and is sacked at least 5 times.

Sacks and pressures aside, Palmer does have a nice pair of receivers to throw to in Larry Fitzgerald and Michael Floyd. Last season, Janoris Jenkins was able to effectively shut down Fitzgerald last time they met, limiting him to 3 receptions for 31 yards, but a bit of that had to do with the atrocious QB play in the desert last year. Palmer isn't great by any means, but he is a pretty good quarterback. The Larry Fitzgerald - Janoris Jenkins match up is going to be an important one to watch, and will ultimately have a large impact on the game. Overall, the Rams' secondary has an advantage over the Cardinals' aerial attack.

Projection: Look for Palmer to throw a touchdown or two but throw just as many interceptions.

The last and probably the least effective part of ARI's gameplan for week 1 is their dismal running game headed by Rashard Mendenhall. He can get the job done, but not with that atrocious offensive line.

Projection: It's safe to say that Mendenhall will be stuffed and not surpass 60 yards rushing the entire game.

Analysis: St. Louis's defense is simply too much for Arizona to handle. Arizona will be lucky to get more than two touchdowns on Sunday.

Arizona has a great defense that shut out Green Bay and Dallas starters in the preseason, it's a top 10-15 defense for sure. However, they will have no idea what to expect week 1 and therefore this might be a higher scoring game than anticipated. The biggest problem Arizona is going to have is simple: who is going to cover Jared Cook?

Jared Cook is one of the most athletic tight ends in the game today, and with Patrick Peterson covering Chris Givens, and Tyrann Mathieu likely on Tavon Austin, all that's left for Arizona is their subpar linebackers. Cook will make them look like clowns, and will have the biggest performance of any Ram in the game.

Analysis: St. Louis has too many matchup problems for Arizona to handle

We all know Bruce Arians is going to come in week 1 and try his aerial attack that he employed in Indianpolis last season, but we don't know what to expect from Jeff Fisher and co. With a new DC in Tim Walton and a new offensive scheme/mentality for the Rams, no one knows what to expect week 1. How will Tavon Austin be used? What about Daryl Richardson? These are questions that Arians and the rest of the Arizona staff is going to have to plan for, figure out, and answer when the game begins.