The Rams will play their first of four preseason games tomorrow night against the Browns in Cleveland. Here are the top things to watch for in the preseason.

Share All sharing options for: St. Louis Rams 2013 Preseason: 4 Things To Watch For

Even with my disdain for preseason "football", there is still much to be learned about the Rams in these upcoming games. Here's a list of the top four things to watch for.

1. The Running Back Battle

The Rams have six running backs who all can play in the NFL. Only three or four will make the roster, and the preseason games will be a huge deciding factor for them. Daryl Richardson, Zac Stacy and Isaiah Pead all seem to be safe bets to make the roster,. Since the Rams will not be carrying a full back this season, they may be able to keep another running back. 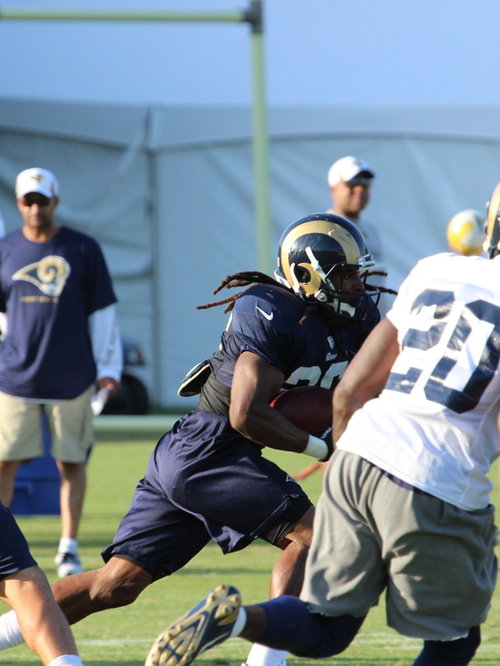 Is there a front-runner in the Rams' running back race?

Benny Cunningham has been very impressive in training camp. I would really like the Rams to keep him around. The practice squad is also a possibility, but I fear another team would just pick him up and put him on their active roster. If the Rams keep Cunningham, he may have to make the team outright.

Terrance Ganaway and Chase Reynolds both have flashed ability, and will get their shots to carry the ball in the next four games. They will have to make the most of it, as this is a true battle at running back.

The Rams have their best group of pass catchers since the Greatest Show On Turf. Combined with great talent, the Rams new toys also have versatility. Jared Cook, Stedman Bailey, Tavon Austin, and Chris Givens can line up all over the field to create matchup problems. Lance Kendricks is also a player who is very useful. He can play the traditional in-line tight end, or motion into the backfield to play full back.

What I want to see is how much the Rams will line up in shotgun, and how many times the Rams use a single back formation. I have a feeling the Rams will be using a lot of 11 and 12 personnel in 2013.

From the looks of it, the Rams will be moving to a higher tempo offense, using more spread looks. The preseason will be our first look at this revamped offense by Brain Schottenheimer. Of course the Rams won't show everything in their offense, but we will be able to see the basic concepts that will be in play this season.

The 2013 Rams will have two new starting safeties. T. J. McDonald and Darian Stewart are listed as starters on the Rams latest depth chart, but nothing is set in stone.

Rodney McLeod is one of the Rams best special teams players, and he may surprise some people if given the chance. Matt Daniels recently returned to practice, and he will see a lot of playing time in the preseason.

The Rams defense is looking to take the next step to become a top 10 defense. They will need at least league average safety play for that to happen. We will see if the Rams have enough on their current roster to provide that production, or if they may have to make a move before the regular season begins.

Sam Bradford finally is surrounded by talent that should allow him to showcase his ability, but all of that will be for naught if he isn't protected.

The Rams brought in Jake Long to help shore up what has been a patchwork unit for the greater part of the last decade of Rams football. The starting five looks solid, but Jake Long, Rodger Saffold, Harvey Dahl and Scott Wells all have injury issues. It's highly unlikely that the Rams get 16 games out of each of them. Players like Chris Williams, Barrett Jones, Tim Barnes, Brandon Washington, Shelley Smith and Joe Barksdale will have to prove they can play multiple positions well enough to spot start as needed.

There is also a battle for the left guard job between Shelley Smith and Chris Williams. Shelley Smith is listed as the starter for the Rams, but Chris Williams has received his share of reps with the ones. This battle may come down to performance in the preseason.

What will be the biggest things you look for in the next four games for the Rams?