St. Louis Rams' Sam Bradford: Is he a 'franchise quarterback'?

In today's pass-happy NFL, no position is more significant, or comes under closer scrutiny, than the quarterback. A franchise quarterback is a player coveted by every NFL team - the key to playoff aspirations and Super Bowl title hopes. What defines a franchise quarterback? Do the Rams have one in Sam Bradford?

Share All sharing options for: St. Louis Rams' Sam Bradford: Is he a 'franchise quarterback'?

The quarterback is the most talked-about position in the NFL. As the most important position on the field, it's easy to understand why so much attention is paid to them. When the terms "elite", "top ten", "franchise player" and "NFL rankings" [among others] are read in articles and commentary, more often than not they are used in reference to the quarterbacks of the NFL. These terms are being used with greater frequency [and about more quarterbacks] than ever before.

The most important question for St. Louis Rams fans: is Sam Bradford a "franchise quarterback"?

In an article for Bleacher Report, on July 26, 2013, "How to Define a Franchise QB in Today's NFL" (please click on link), Erik Frenz presented a set of criteria and standards, for what constitutes a "franchise quarterback". The article relies exclusively on statistical analysis, and concludes with a list of quarterbacks who qualify as "franchise quarterbacks". It's noteworthy that his analysis is based solely on results from the 2012 season.

Three measures comprise the standards for the criteria of "statistical pedigree": Yards - Per - Attempt, Passer Rating/QBR, and Completion Percentage. The following are what a quarterback must achieve to meet the standards set: 63.0% completion percentage, 85.8 passer rating, and 7.6 yards - per - attempt. Sam Bradford, with a 59.5% completion percentage, 82.6 passer rating, and 6.7 YPA, did not meet any of the three standards in 2012.

As noted in the article, team win-loss record is a problematic measure for a quarterback:

"Yes, overall win-loss record is one of the worst measures of a quarterback. It tells you nothing about the player except that he's on a team that wins."

A measure known as Win Probability Added [WPA], developed by the stats website Advanced NFL Stats, is an innovative way of bringing "winning" into the "franchise quarterback" discussion. The standard a quarterback must achieve is 0.155 WPA - per - game.

The other standard for "winning" is a Super Bowl victory, which is considered a defining moment for a "franchise quarterback".

Sam Bradford did not achieve either of the standards, as he has no Super Bowl victory on his resume, and his WPA - per - game was 0.12.

Arm strength is the focus in this "dynamic skill set" criteria. Accuracy percentage, on throws travelling 20 yards or more through the air, is the measure used in relation to arm strength. The standard to attain is ranking in the top 12 in this statistic. Sam Bradford, with an accuracy percentage of 41.7, ranks 12th on the list, meeting the standard set for this particular criteria.

Erik Frenz suggests that some of the NFL's best quarterbacks are those that release the football quickly. He uses a statistic tracked by Pro Football Focus [the average time it takes a quarterback to attempt a pass], as an indicator of quick decision making. The standard for this criteria is a top ten ranking in attempt time. Sam Bradford ranked 18th in 2012, and did not attain the standard.

Who Are The NFL's "Franchise Quarterbacks"? 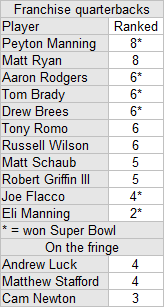 The article on Bleacher Report is an excellent starting point in any "franchise quarterback" discussion. To further the discussion, the following are my observations and questions regarding the criteria:

"The quarterback is considered the most important player on the field, but in what is frequently called the "ultimate team sport," we shouldn't give one player all the credit for winning or all the blame for losing."

It has become commonplace to refer to Sam Bradford as the Rams' franchise quarterback. There is little doubt the Rams organization believe they have their franchise quarterback in Bradford. It is one of the major reasons Jeff Fisher came to the Rams in January, 2012. There are many detractors, however, that question whether Sam Bradford IS the face of the franchise........the player who will lead the Rams to the Super Bowl.

The link to the Bleacher Report article was originally posted on TST, July 30, 2013, in my weekly Random Ramsdom column. (please click on link). The first comment posted in the thread for that article is by "fletcherisland". It's compelling - both for it's insight, and depth of analysis [the comment was applauded and recommended by the TST community]. It presents a logical, balanced argument for including Sam Bradford in the "franchise quarterback" discussion. A must read.