Can you hear that? Yeah, that’s regular season football approaching.

There are only 14 more days until you get to see your first snap of 2013 Regular Season Football. Three days later you’ll get to see a new-and-improved Rams team take the field. Break out the red Sharpie and cross another day off the calendar!

The Jets’ 6th round pick from 2012, turned St. Louis Ram, has decided to hang up the [barely used] cleats and head back to graduate school. Given the competition at the position, it’s hard to say what impact Ganaway would’ve had, if any, in the Rams offense in 2013. Either way, Rams Nation wishes him the best of success in his future endeavors.

The Seahawks Are Your 2013-2014 Super Bowl Champions…Already: NFL.com

Russell Wilson, the QB for the Seattle Seahawks, thinks his team is going to be "so damn good this year." His emphasis on the matter has even made NFL.com writer - Mike Silver - a believer. His sons don’t care for it…and neither do I.

Will Witherspoon Excited To Be Back On The Field…For Now: Washington Post

The Rams added Witherspoon over the offseason as much needed depth - and experience - at the OLB position. Due to a Jo-Lonn Dunbar four game suspension, Witherspoon was catapulted into a starting role. He’ll have big shoes to fill, with Dunbar having had the second most tackles on the team in 2012.

Rodger Saffold looks as if he’s geared up to return to football, and the coaching staff hopes to see him on the field this Sunday. Saffold, who’s no stranger to injury, is coming off a seperated shoulder which occurred a mere three plays into the first preseason game. Rushing him back wouldn’t be wise. Having him back would certainly be nice. Also, Tavon Austin returned to practice, and the Rams had a special guest on Wednesday…

There’s not much to see here from PFF, as they provide a quick snippet for each of the NFL’s 32 teams post-Preseason Week 2. What you will see, though, isn’t a positive. Deep breaths, it’s all going to be ok…oh, who am I kidding…now is the time to panic!

Over/Under For Both the AFC & NFC West Teams: Football Outsiders

The number - for the Rams - is 7.5. Fair enough, I suppose. They haven’t exceeded eight wins in a very long time, and it’s pretty much exactly what they won last year….7.5 games. I get the feeling Mike isn’t impressed… 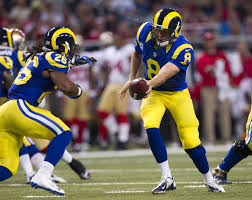 You want to be the signal caller for the St. Louis Rams? How would you like to hand the ball off to Daryl Richardson, or possibly question Chris Givens’ speed? Maybe put on Sam Bradford’s helmet? I bet you’d like that. I’m sad to say that this is the best I can do for you.

It’s a touch of everything you’d want to know from Wednesday’s practiced, finished off with a dash of "dizzy bat" competition. One player in particular was - according to Coach Fisher - the worst he’s ever seen.

40 Fantasy Players You Should Shy Away From: RotoWorld

Evan Silva highlights 40 NFL players that you should think twice before drafting; providing a bit of insight on each. It’s certainly something to consider if your draft is looming. There are also a couple of Rams that Silva’s not so high on…

The Rams have already named their starter for the 2013 season. It’s going to be last year’s 7th round pick, Daryl Richardson. Now that they’ve gotten that out of the way, there’s still plenty of time in the preseason for the competition to continue. Expect to see more of Isaiah Pead and Zac Stacy over the next couple of weeks.