Through two preseason games, there's a familiar trend happening with the Rams defense.

The St. Louis Rams have now played two preseason games. So far, the results have been mixed. That's not especially surprising for exhibition games. They're pure tune up, and the Rams, like most teams, have plenty of tuning up to do. One area that needs some attention is how the defense covers tight ends and doesn't get burned by fakes on the play action.

Opposing tight ends have gouged the Rams defense for a total of 160 yards on 12 catches. Packers tight end Jermichael Finley was especially effective on Saturday night, catching four of five passes thrown his way for 78 yards. Let's look at two plays from Saturday's game, Finley's 25-yard catch in the first quarter and his 33-yarder in the second. 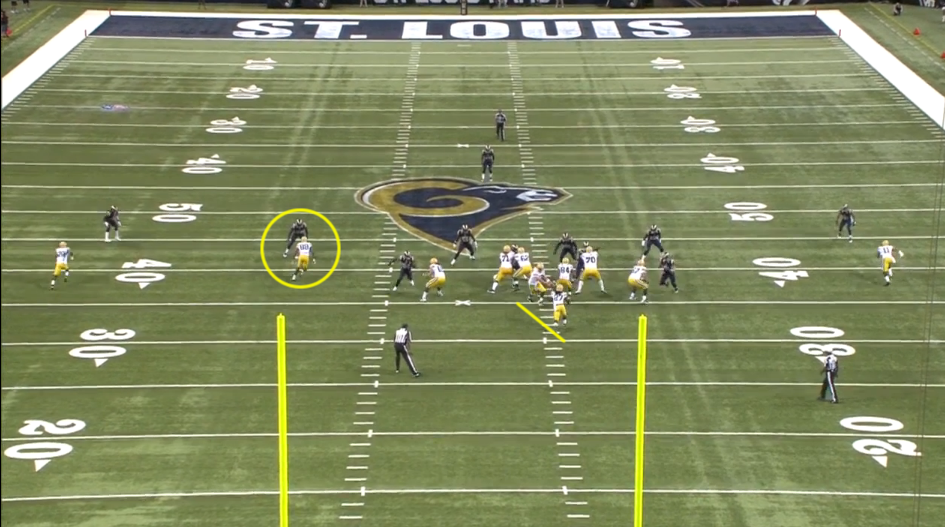 Finley's lined up in the slot here. That's Darian Stewart lined up across from him. Rodgers is faking a handoff to the running back, and he's sold it to the Rams defenders here. James Laurinaitis charges toward the right guard where it looks like the run is coming.

Stewart, still watching the play in the backfield, lets Finley go by. He could very well have been handing him off to the linebacker for coverage. That linebacker in the circle with Finley is Will Witherspoon, who has Finley behind him now running a crossing route. 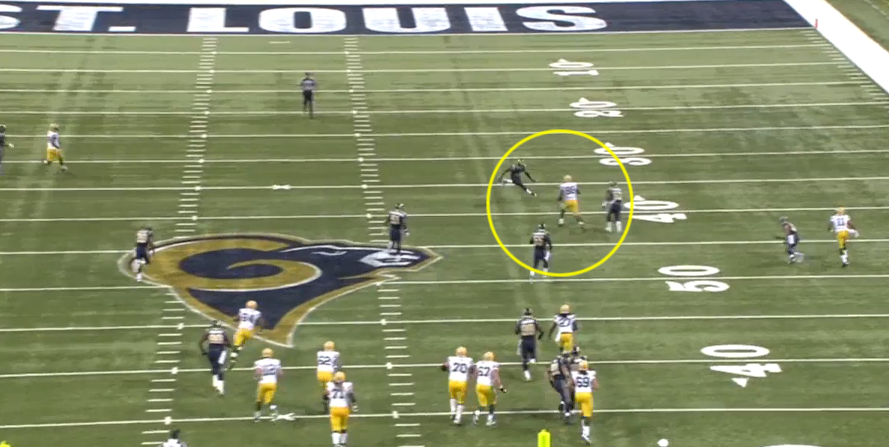 Finley gets the ball and turns up field for a 25-yard gain. James Laurinaitis is running back to get him. Alec Ogltree keeps his eyes focused on the play in front of him, until it's too late. T.J. McDonald, who handled most of the work as the Rams' deeper safety against Green Bay, is in front of him and makes the tackle.

In the base Cover-2 or Cover-3 defense, the outside linebackers are responsible for watching the run and covering the flat. In this case, Witherspoon is committed to the run here, so he doesn't drop back. Stewart is in there to play the run or move back in coverage. He bumps Finley, and then sends him off. Ogletree should have picked him up, or Stewart stayed with him since he was on him in the slot. His eyes are fixed on the fake. He moves out a few steps to his left and misses Finley entirely.

The Packers were running a no-huddle offense here, and it had the Rams reeling. The biggest problem with this play, from our vantage point outside the huddle, is getting hornswoggled by the play action fake, which was a problem last season. 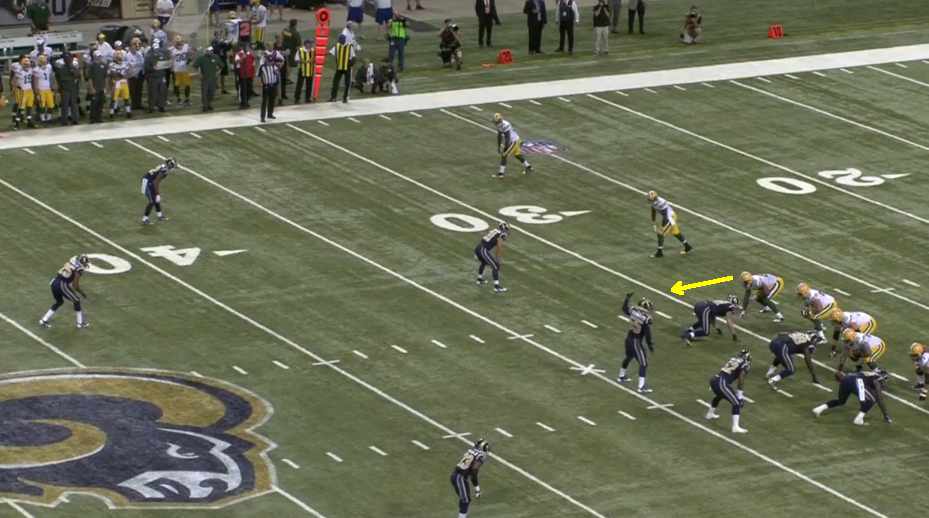 Finley in-line here, with the arrow pointing straight forward, where he'll release to. Like the play above, the corners are on the outside receivers, except for Cortland Finnegan whose moved inside for the nickel package on this play. 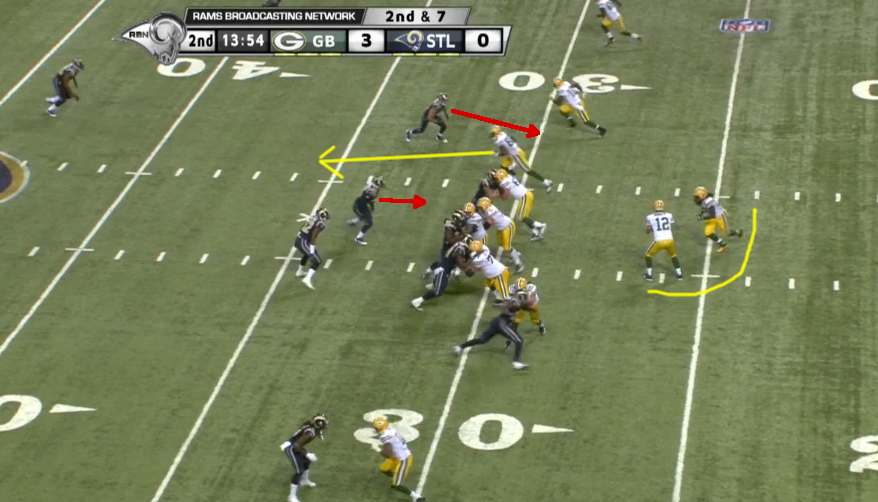 Once again, the Rams buy the fake completely. Finnegan, the red arrow at the top of the page, lets the slot receiver go by and races into the backfield at the sight of Rodgers' handoff. Laurinaitis moves up too, as noted by the shorter red arrow. 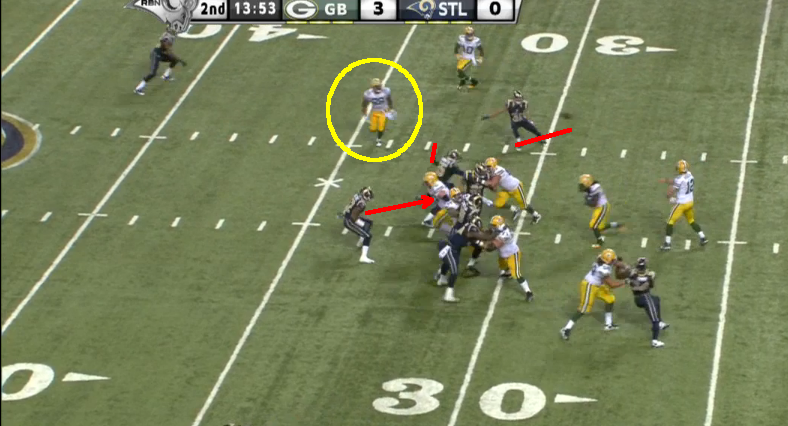 Ogletree is still looking into the backfield here, the red arrow. If he drops back to cover that area of the field, there's a better chance that he at least stops Finley right after the tight end catches the ball.

Rodgers has just put the ball in the air, and Finley has turned to make the catch. McDonald comes up at the snap. McLeod drops back into deep coverage. McDonald plays the slot receiver with Finnegan off into the backfield. You end up with Finnegan and Laurinaitis all alone, too far ahead of the action to make a play. Finley has found a nice little hole, big hole rather, in the coverage.

Ogletree, the small red half circle on the right, breaks back to chase Finley. He can't catch him. McLeod, the big half circle on the left, chases him. He and Janoris Jenkins ultimately make the stop, 33 yards from the line of scrimmage.

It wasn't just this game. The Browns did it too, highlighted by an easy 30-yard pick up by Jordan Cameron.

Again, we'll throw out the usual caveat about this being the preseason. Teams are sort of expected to stink this time of year while they work out the kinks and winnow down the roster.

But there's something unsettling about this trend. The Rams struggled against the play action pass last year. Defensive coordinator Tim Walton still has time to get the bugs ironed out. If they don't, it's going to be hard to meet the expectations heaped on the Rams as a follow up to a surprising 2012.