The St. Louis Rams struggled to effectively tackle in Saturday’s matchup against the Green Bay Packers. Is there cause for concern?

The St. Louis Rams had a lot of things going for them in Saturday’s matchup against the Packers. Tackling was not one of them. I watched yesterday’s game again this morning, and noticed immediately that tackling was an issue. Here’s a few plays - specifically from the first half - where poor technique, poor angles, and poor execution hurt the Rams… 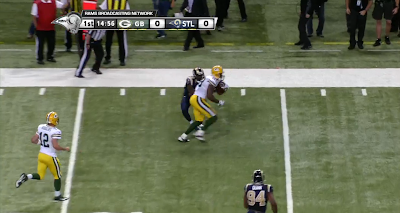 This is the very first play of the game. Jermichael Finley makes the catch at the 18 yard line. Darian Stewart runs right past Finley, unsuccessfully using his reaching arms to make the tackle at the 23. Finley goes 8 more yards for a first down [11 yards on the play]. 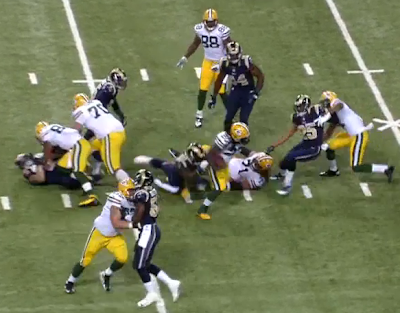 The very next play, Eddie Lacy takes the handoff and carries it right up the gut. Michael Brockers - who had forced the guard to the ground - has Lacy run right into his arms, but is unable to wrap up. Brockers initially makes contact one yard past the line of scrimmage. The play goes for eight yards.

This play initially started on the Rams’ 37 yard line. Eddie Lacy takes the handoff, and barely escapes a reaching Kendall Langford, who made almost had Lacy for a loss at the 39. The chances of Langford making that tackle, even if he had grabbed Lacy’s jersey, were slim. The picture above shows TJ McDonald and Will Witherspoon attempting to tackle Lacy at the Rams’ 28. McDonald had already taken a bad angle on the field, so you can see he’s reaching back to attempt to take down Lacy, and you can also see that Witherspoon isn’t wrapping the ball-carrier. Lacy barreled through them both, taking the ball to the 22 yard line…15 yards after first contact, and six yards after expected a veteran OLB and starting Safety fail to end the play.

Here you’ve got Trumaine Johnson doing pushups at the Packers’ 48 yard line. Jarrett Boykin - the Packers WR - had already obtained a first down prior to spinning right out of his would-be tacklers arms. Boykin then ran the ball down to the Rams’ 38, where he was finally brought down by…Trumaine Johnson. At least he didn’t give up on the play…which went for 26 yards…14 yards after first contact. 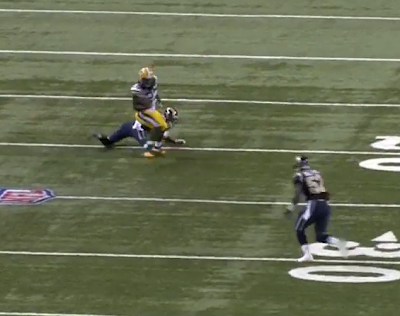 Yeah…that’s Trumaine Johnson on the ground again. The Packers opened the 2nd quarter on their own 17 yard line. Aaron Rodgers play-fakes to Eddie Lacy prior to dumping it off to him at the 18. Lacy embarasses Johnson with a spin move in the open field at the 21, before toting the ball another 7 yards and passing the line of gain. 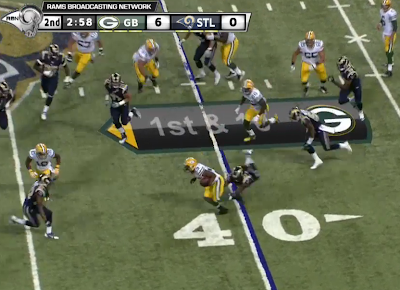 Don’t be fooled by this one. That’s safety Matt Daniels, and I can assure you he started this play on the other side of Packers’ RB Johnathan Franklin. Daniels - who lined up about 13 yards off the line of scrimmage to start the play - immediately recognizes the draw, and sprints in to make the play. His angle, clearly, left a bit to be desired. Luckily, there was help [Alec Ogletree] to stop the play after only four yards. This play should have ended at it’s starting point.

Nearing halftime, the Packers are driving downfield with their 2nd string offense trying to put points on the board. The line of scrimmage is the Rams’ 48. Out of the shotgun, Graham Harrell hits tight end D.J. Williams at the 32 yard line. In the picture on the left, you’ve got Quinton Pointer approaching Williams from behind, Alec Ogletree approaching directly in front of him, and Josh Hull from downfield [at the 29 yard line]. The picture on the right displays how none of them were successfully able to take Williams down. Hull is on the ground, Pointer is running in behind the play [above the aforementioned ground dweller], and Ogletree is pulling on Williams from behind, and getting assistance from Darren Woodard. Williams caught the ball at the 32, had three Rams within a yard of him, and was still able to pick up four more yards. How Williams was not the player on the ground at the 30 yard line - and in need of medical assistance - is beyond me.

Regardless of whether or not it’s the pre- or regular season, the Rams cannot afford to miss tackles as frequently as they did in the first half of yesterday’s game. Seven missed tackles lead to big gains and first downs for the Packers. If it hasn’t been already, tackling needs to be a focus for Tim Walton and all of his positional coaches. I don’t know if it’s something the team can "fix" in two weeks, but the team needs to show vast improvement in their two remaining preseason games.