Preparing for the Rams' second contest of their 2013 preseason schedule.

Kendrick Lamar did a rap.

Let us hope Sam Bradford does a football as well tomorrow.

For game-related info, check out the SBN page for the game. For Packers news leading up the game, check out Acme Packing Company.

Things are a bit different for the Packers' passing game these days. Donald Driver has retired. Greg Jennings is busy spouting his mouth off in ways unuseful endearing himself less to his new Vikings fan base than he is fostering enmity from his former Packers supporters. Jordy Nelson is hurt. Randall Cobb is hurt. So it shouldn't come as a surprise that the Packers' offense (perhaps save for an early 50-yard pass from Aaron Rodgers to James Jones) underwhelmed, and that's being generous, against the Cardinals in a 17-0 whomping.  Cobb might go, but it's down to Jones, Jarrett Boykin, Jeremy Ross, Kevin Dorsey and a host of roster-spot gladiators in Sederrik Cunningham, Myles White, Alex Gillett, Omarius Hines, Charles Johnson, Ty Walker and Justin Wilson. And of course while Jermichael Finley is now a mainstay at TE, there's depth behind him to sort through in Andrew Quarless, D.J. Williams, Ryan Taylor, Brandon Bostick, Jake Stoneburner and 2012 Ram Matthew Mulligan.

For the Rams, it'll be a tough test early for as long as Aaron Rodgers is in. Behind him, the combination of Graham Harrell, B.J. Coleman and Vince Young leaves much to be wanted. Their performances in their first game left plenty to work on. So it will be on the guys behind Janoris Jenkins, Cortland Finnegan and Trumaine Johnson to step up. Brandon McGee, Robert Steeples, Darren Woodard, Andre Martin Jr., Quinton Pointer and Drew Thomas will have a chance to make plays against a disappointing GB unit from a week ago. The safety battle is, of course, one to continue to watch. T.J. McDonald, Darian Stewart, Matt Giordano, Rodney McLeod, Matt Daniels, Cody Davis and Rashard Hall make up the safety unit. Outside of McDonald (but not by much, in reality), there's roster room to be had.

Well, the Packers haven't been exactly known for their running game in recent years, but the draft additions of Alabama RB Eddie Lacy and UCLA counterpart Johnathan Franklin are expected to change that...some. That change was put on hold against the Cardinals as Lacy sat with a hamstring twinge and Franklin put up just 14 yards on six carries, a less than 2.5 YPC. The Pack will come to St. Louis with James Starks and Alex Green along with the backend pairing of DuJuan Harris and Angelo Pease fighting for roster life.

The Rams, on the other hand, did a wonderful job against the run last Thursday. The Browns four RBs combined for just 73 yards on 26 carries...a 2.81 YPC clip. There isn't a game on the regular season schedule we shouldn't automatically take that performance for. There was bigger news midweek concerning Jo-Lonn Dunbar and the usage of certain physically modifying substances, but he'll be available to play along with James Laurinaitis, Alec Ogletree and Will WItherspoon. Still, it will be up to the phalanx supporting the top line that gets called upon to show up consisting of Josh Hull, Jabara Williams, Daren Bates, Jonathan Stewart, Ray Ray Armstrong and Joseph LeBeau. Plenty of youth and talent to filter through

The headline for the Packers this offseason for this unit was the loss of LT Bryan Bulaga. And while it was just one preseason game/half/handful of plays (ok, that's too far, but it's a small sample size nevertheless), Colorado rookie product David Bakhtiari was far from overwhelmed in his virgin performance. It doesn't help that both Derek Sherrod and JC Tretter are both on the PUP list as well. Now I'll be honest - I know little about the depth of the Green Bay line depth, outside of the big program-developed youth I saw in college like Andrew Datko, Don Barclay, Lane Taylor, Patrick Lewis and Sherrod. And there's plenty of talent there, so I'm very hesitant to proclaim them pushovers.

The Rams D-line, though, has quickly turned into a unit of strength. The depth is trying to extend that description beyond the starters. William Hayes, Matt Conrath, Jermelle Cudjo and Ernie Sims have the regular season bonafides (save for Conrath) to warrant some praise for the backup role. It will be interesting to see how they fare, but the preseason is built for the lower third of the roster -- guys like Mason Brodine, Garrett Goebel, Al Lapuaho, linebacking convert Sammy Brown and down-roster options Gerald Rivers and R.J. Washington.

If there's an area the Packers need to improve on from their first preseason offering, it's pass defense. Both Carson Palmer and Ryan Lindley chopped up Green Bay's defensive backs while Drew Stanton played to Shurmuresque success working short but consistently moving the ball. With Tramon Williams and Casey Heyward both out (for the entire preseason, in all likelihood), the Cardinals feasted on Sam Shields, Davon House, Micah Hyde, Jarrett Bush, James Nixon, Loyce Means and Brandon Smith. They'll definitely have the motivation to improve on last week what with job cuts on the line (cue the weak economy joke, Jerry!). But hey, if you need a pick me up, try this snazzy t-shirt design available only from Tramon Williams' personal website. Only the best!

Meanwhile, the Rams' starters in this aspect certainly had an interesting performance. Sam Bradford was wonderful, though three dropped passes made his stat line look more imperfect than it should have looked. Tavon Austin didn't immediately captivate in the tsunami of hype we were exposed to this offseason. Jared Cook wasn't a seam monster. Chris Givens certainly looked like he was in position to climb up from a solid rookie season into stellar consistency. But it was one preseason showing, and the ball got spread around. Nine receiving options caught either one or two passes. Raymond Radway had a highlight in there and Phil Lutzenkirchen's quick feet raised eyebrows. The only targeted receivers who didn't catch a pass were Austin, Austin Pettis, Emory Blake and Nick Johnson. This should be perhaps the most interesting unit battle in the game

The Packers run defense did a phenomenal job last week against Stepfan Taylor and Alfonso Smith. So it's another battle that, should any of the Rams RB stand out, might deserve a degree of extra praise. In the Q&A I did with Jason Hirschhorn of Acme Packing Co., he commented the following on the LB corps:

The linebackers look solid at the top.

But the depth drops off quickly. Clay Matthews and Nick Perry will be able to create consistent pressure, but second-year player Dezman Moses has been mostly forgettable in camp this year and everyone else is a rookie. The best of the rest is probably UDFA Andy Mulumba, who’s most known at this point for being a top 3 pick in the CFL Draft (which, sadly, featured no helmet-haired Canadian version of Mel Kiper critiquing selections).

The inside linebackers will be Brad Jones and A.J. Hawk. Hawk’s been consistently average during his tenure in Green Bay, and though he’s looked leaner and faster in camp, I doubt his play changes too much. Jones is the more exciting player, as he’s one of the best coverage linebackers in the league. Behind them, the best players so far this year have been Robert Francois and rookie Sam Barrington. Neither is an ideal candidate to start, but they can play.

The Rams on the other hand still have some sorting out to do among the RBs. While Daryl Richardson still holds the top spot on the depth chart, it's not as if he's a 20-carry back. So there's plenty of playing time to be had for Isaiah Pead (who can pretty much only go up from here), Zac Stacy, Benny Cunningham and Terrance Ganaway who got some practice time in this week after missing the Browns game.

It's another 3-4 front for the Rams' O-line to deal with this week. And it's a another talented one to boot. Former Ram Ryan Pickett holds down the nose while the ends consist of B.J. Raji and Datone Jones, who endured an ankle injury in last week's game though HC Mike McCarthy hinted that he might be able to play tomorrow. The depth is a mix of C.J. Wilson, Josh Boyd, Mike Daniels, Jordan Miller, Mike Neal, Gilbert Pena, 2nd year Michigan State product Jerel Worthy and Johnny Jolly, he of purp fame. But hey, I love a redemption story as much as anyone, and Jolly served six months in prison and was out of the NFL for three years. Personally, I hope he comes back with a vengeance...but feel free to start next week.

Eric laid out some of the notable storylines on the O-line earlier, and with Rodger Saffold still out there's plenty of work to be had. Sure, it will be a good look at the starting group of Jake Long, Shelley Smith, Scott Wells, Harvey Dahl and Joe Barksdale in Saffold's stead. But, as always, preseason games are job auditions. So we'll see what we get out of Chris Williams, Tim Barnes, Brandon Washington, Ty Nsekhe, Sean Hooey, Ryan Lee, D.J. Young and Graham Pocic.

This week's top 3 storylines brought to you by football faces of the preseason: 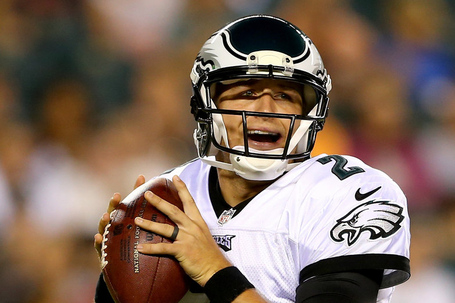 That is a face.

There's agony, sorrow, dejection, dread...it's a mix of everything I don't want to feel after this game. I want to feel optimistic about the 2013 Rams. I want a team performance that sets the stage for further success. I want to not make this face. 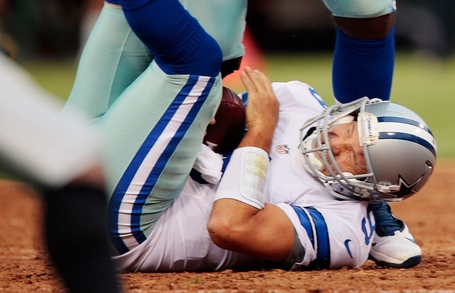 This is Tony Romo doing a Tony Romo.

Please - no serious injuries. Please. No grimacing while writhing around in the dirt unaware of the football you're supposed to be playing. Just no injuries. At all. Thanks. 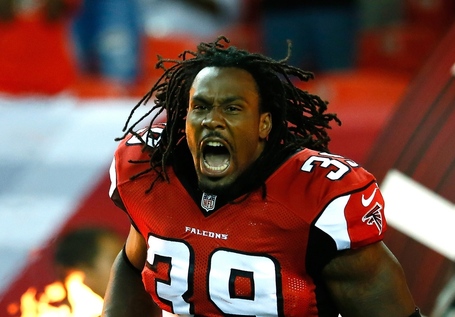