Details matter: The Rams believe they have the right mix on offense

The St. Louis Rams have been trying to build a more complete offense for years now. They finally believe that all the ingredients and the right formula to make it work.

Share All sharing options for: Details matter: The Rams believe they have the right mix on offense

Your friend Todd is always telling you about his plan. Todd once sat down and mapped out his life, during his senior year of high school. He is now in the third phase of a six-step plan, with lots of bullet points in between each one.

Phil spends part of his day working from the coffee shop. He writes copy. Has a nice office with a stand-up desk too. But he believes that the buzz of being around undergrads inspires his work on the latest ConAgra campaign. No need to obsess, he knows that things usually have a way of working themselves out.

Not all Todds are Warsaw Pact dictators. Not all Phils prefer taking their lunch on gluten free bread. The right way sits somewhere in the middle, a delicate chemistry of need and personal preference.

The St. Louis Rams offense is in the process of finding its own pH balance.

"The thing that's been fun is you not only have a fast group but a group that is really buying into the details," Rams offensive coordinator Brian Schottenheimer said after Monday's practice, "the angle of the releases, the splits, stuff like that. A good passing game is one that's detail oriented. These guys have done a good job of that."

A good passing game is one that's detail oriented.-Brian Schottenheimer

During practice, our eye naturally gravitate to the spectacular catches, a player's speed or wins a physical battle. All of those things are important. The same holds true during the season. Bruce, Faulk and Holt doing something amazing was the norm once upon a time. Behind every jaw-dropping move and the dozens of touchdowns was a precise route or a defender skipped by design.

For the kind of offense the Rams plan to run, it's the details that matter most. Much of what the offense has done so far in camp is a repeat of what they did in the spring practices. They're learning the playbook, embedding it in their subconscious.

"Today is actually a review day for us," Schottenheimer said. "We're in the fourth practice and we've got three installs, so we just started all over again."

And how's it going so far?

A formula only works as well as its parts, the harmonious interplay of each ingredient, all serving a slightly different purpose. More details. Schottenheimer's offense has its interworking parts too, a collection of players who fulfill specific tasks. 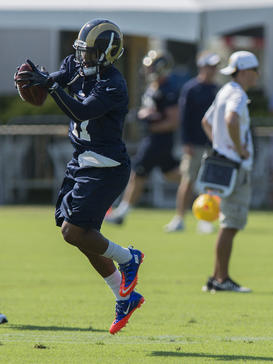 Training camp us underway, and all eyes are on the Rams' first-round pick.

And for the first time in a long time in the recent history of the Rams, those aren't just household chemicals hopefully plucked out of the league's garage by personnel execs since exiled to television and radio.

"I think everything here is built on running the football," Schottenheimer reminded the world. "We feel good about the backs we've got here. Again, we know you have the run the football in this league, especially in this division."

They don't run routes. They don't catch anything. And they don't (usually) score touchdowns. That said, the most important part of the whole operation might just be the offensive line. The Rams, and Sam Bradford in particular, haven't had a reliable front five in years. But this season looks different.

"There's a lot of pieces," Schottenheimer said. "The guys are working together. Obviously, Jake's done a nice job. Rodger moving over to right has been terrific. Having Scott Wells back and healthy, they're playing well together. It's going to be fun to watch those guys."

Aside from the quarterback, Tavon Austin is shaping up to be the centerpiece of the Rams' new offensive formula. His speed and versatility opens new chapters in the manual.

"Well, obviously, there's plenty of touches for him," Schottenheimer promised. "We have big plans for him.

Notice anything different about this version of the offense? Well, it's faster, but we covered that already. What else? It's bigger, taller to be precise, thanks to the addition of Jared Cook and an anticipated breakthrough from second-year wideout Brian Quick.

"Jared can get down the field very quickly for us," head coach Jeff Fisher said. "He's a big target, big frame. He's got a giant catch radius which is always a good thing if you're a quarterback, so he'll really help us."

"The one thing that ‘Quickie' has, he's big and he can run," Schottenheimer said. "The other guys all come in different shapes and sizes, but he is consistently the one big guy that can really run and stretch the field. He's making a lot of plays for us down the field, so that's fun to see."

Both players are sitting on a goldmine of potential. And neither one has realized just what they're capable of in the NFL. The Rams are betting that this is the year both "Cookie" and "Quickie" take the next steps in their development.

He's a young quarterback with a great future.-Jeff Fisher

Schottenheimer may be the chemist behind the whole experiment, but the catalyst that makes it all work is none other than quarterback Sam Bradford.

Most of the NFL world still isn't sure what to think about the first pick in the 2010 NFL Draft. Even the local guys asked Jeff Fisher on the first day of training camp if this was a "make or break" season for Bradford, a question that the world's been asking since the end of the 2012 season. (We'll give the locals credit though, they're usually the last to catch on with national trends ... social media for example).

"No, I think it's just the next year," Fisher responded. "He's a young quarterback with a great future ahead of him, so that's not the way we look at it."

The "make or break" talk has something in common with the "elite" conversation when it comes to quarterbacks. Nobody can really define what either one means, but it's not stopping anyone from leaning on the easy narrative.

Aside from the offensive line problems, the lack of talent at wide receiver and two years of a team coached by Richard Nixon's spiritual heir ... Bradford's biggest problem is a perception problem. There isn't much the Rams can do about that.

What the Rams can do, what they did do, is finally give the quarterback the tools to succeed.

It's up to Bradford to put it all together. He knows the formula now and how to find the right mix thanks to some carry over from the season before.

"Last year we were learning the offense," Bradford said last week. "This year it's more of trying to master the offense. That's my mentality: take it day by day, try to get better, and try to help this team win games.

"We have an opportunity to build on what we were able to do last year and not start from scratch."

Schottenheimer expressed confidence in what he's seen from Bradford so far during the offseason after Monday's practice.

Schottenheimer's potion relies on an exact mix of receivers, running backs and blockers precisely synced up. The details. But there's that freelance element in the mix too.

Todd and Phil, the detail guy and Mr. easy going, meet behind the line in the pocket.

"If we just design good plans and the guys work hard and know what they're doing," Schottenheimer explained, "the ball's going to get spread around - that's the key.

Sam's got to read his progressions. The ball's going to go to the open guy. You get in trouble when you're limited and you try to force a ball to a guy or two, but when you have multiple weapons, the ball gets spread around pretty good."

Bradford understands his role at the center of the whole concoction, which goes beyond just finding the open man on the field.

"I think it's part of my evolution and part of my position," Bradford said. "I need to step up and be the leader of this offense."