It’s halftime of the 2013 calendar year. Yesterday we re-visited the 1st quarter of Rams news. Kicking off the 3rd quarter, without recapping the 2nd, simply wouldn’t be right.

In case you need a refresher on the 1st quarter of 2013, I’ve got it for you right here. Saying that the St. Louis Rams’ offseason has been an exciting one would be an understatement. Let’s have a look at what’s transpired over the past 90 days or so...

April 1 - Chris Long Quits Football. One of the best players on the Rams quits football for the Peace Corps. %AprilFools

April 3 - The Arizona Cardinals Sign QB Carson Palmer. The first eight years of his career weren’t quite as successful as the #1 overall pick from 2003 would’ve liked. He wasn’t the answer in Oakland, either. He’s suiting up for the Cardinals in 2012… Tevin’s got your take on how he impacts the West.

April 3 - Mel Kiper Jr. Predicts Tavon Austin to the Rams. That Kiper from ESPN is one smart fella. He likes the Rams to take Tavon Austin at 16 overall. Silly man.

April 4 - The Rams' 2013 Preseason Schedule is Revealed. The four most important games of the season are announced. Brandon Gibson eyes opponents who will make him an early favorite for the Pro Bowl…

April 6 - The Rams’ Schedule a Pre-Draft Visit With Alec Ogletree. It’s no secret the Rams needed a bit of offseason help at the OLB [specifically SLB] position. The organization wanted a closer look at the Georgia product.

April 7 - The Rams Are A Potential Suitor For Tim Tebow. According to Mike Florio [Pro Football Talk], the Rams are a team to "keep your eye on" in regards to the QB/FB/TE/Rain Jogger.

April 10 - Vince Young Writes a Letter to Jeff Fisher. Luckily, it didn’t come in the form of pasted letters cut out of magazines…Vince Young forgives Jeff Fisher. Also, Sam Bradford is "that kid from Oklahoma." Some things never change.

April 11 - Danny Amendola News. Actually, it’s just his dad being run over by a golf cart. It’s a good time.

April 15 - Rodger Saffold Reports to Offseason Workouts. Huh? I know, I know. The link doesn’t sound appealing but - if you’ll recollect - Jeff Fisher was having trouble getting in touch with Saffold, who was apparently not too happy with being moved from left - to right - tackle.

April 16 - Finding a "Gem" With Their Last Pick in the Draft. The Rams haven’t had much success finding a valuable contributor with their final pick in the NFL Draft. Daryl Richardson was more of an exception… 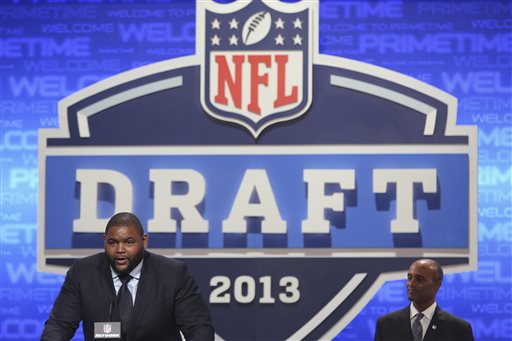 April 17 - The Rams Announce That One of Their Legends Will Announce Day 2 Draft Picks. That’s right…if you haven’t seen enough of Orlando Pace, [and I know you haven’t] he’ll be calling out the Rams’ 2nd and 3rd round picks on Day 2 of the NFL Draft.

April 22 - Is It Worth It For The Rams To Move Up In The Draft? RotoWorld’s Josh Norris discusses how the Rams could like Tavon Austin and DeAndre Hopkins, and might consider trading up to snag one of them in the draft…

April 23 - The Rams Are Showing "Serious" Interest in Marcus Lattimore. Without Steven Jackson in the backfield, could the South Carolina RB be the answer? The knee injury could be a concern, BUT…

April 24 - Re-visiting Each Round of the Rams’ Drafts. It was grueling, but yours truly went back and recappd the Rams’ drafts by round…for about a decade.

April 25 - The Rams Trade Up and Draft WVU WR Tavon Austin. Read it while listening to Ice Cube’s Today was a Good Day. Alec Ogletree must’ve impressed in that pre-draft visit… he’s the new Rams OLB, and he’s expected to contribute immediately. Time to replay Today was a Good Day…just louder…and drunker!

April 26 - Surprise, Surprise! Sam Bradford is excited to have Tavon Austin on the team… "Absoluuuuuutely!" And then they met…. cue up some "Dream Weaver."

April 26 - The Rams Select T.J. McDonald and Stedman Bailey. Here’s your fan approval poll for the Rams’ 2nd and 3rd round selections.

April 27 - The Rams Select Barrett Jones in the 4th Round. The Rams could certainly use some offensive line help. Jones’ versatility doesn’t hurt… The Rams go on to take CB Brandon McGee in the 5th round and traded both of their 6th round picks to move up [into 5th] and draft Zac Stacy. Draft over!

April 30 - TST Grades the Rams’ 2013 NFL Draft. Far more important than the opinions of anyone from ESPN, the good folks at Turf Show Times graded the team they know best.

May 1 - Very Bold Rookie of the Year Predictions. Dan Kadar from SB Nation’s Mocking the Draft gives his early prognostications for Offensive and Defensive ROTY awards. He’s picked one of the new Rams, but it may not be who you’d think…

May 3 - Another Early Prediction For Offensive ROTY - Not so fast, Zac Stacy! Sportsbook has another Rams’ rookie as an early favorite for the award.

May 5 - Sam Bradford and His 2013 Targets. Both old and new, it’s a look at how [and whom] Sam Bradford will be eyeballing in the upcoming season.

May 6 - Evan Silva Ranks the NFL After the Draft. The Seahawks and 49ers came in at 1 and 2, respectively. The Rams? Well, click the link already!

May 7 - More From Silva: Make or Break for Bradford. With the draft over, and no meaningful football in sight, early May is the perfect time for proclamations.

May 17 - Don’t Sleep On This Rams Defense. The defense has been the team’s strong suit over the course of the past two years, and it’s only getting better. I’ll draw comparison to the 1999-2000 defense that helped the Rams get to - and WIN - the Super Bowl. Things are lookin’ up!

May 22 - 49ers’ WR Michael Crabtree Suffers Torn Achilles. I don’t care much for the 9ers, but I’ll never wish them harm…. I’m lookin’ at you Jo-Lonn Dunbar. 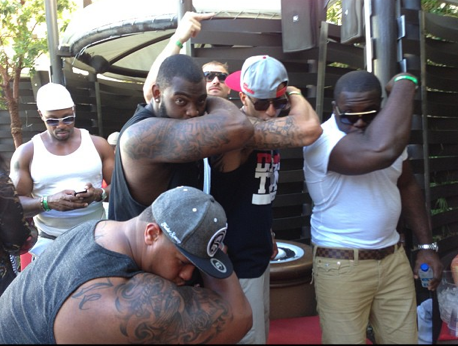 May 28 - Chris Long Is Cool With Colin Kaepernick…But Not That Cool. If you’re ever thinking "I’m on the fence about who my favorite Ram is" this should help solidify it for you.

June 1 - Chris Long Showing Off Multiple Tricks In the Offseason. Someone called the Rams’ DE a "One Trick Pony" and he didn’t particularly care for it. I ran with that…

June 4 - Rams’ Legend David "Deacon" Jones Passes Away at 74. Not the news that anyone wanted in early June. He created…and perfected…THE HEAD SLAP!

June 5 - An Offseason Q&A With the Arizona Cardinals. SB Nation’s Revenge of the Birds provides some great insight on the Cardinals offseason, and thoughts on the Rams.

June 5 - The Roster Battle for Left Guard. Chris Williams leads the race for the Rams’ vacant LG position. With Rok Watkins out for Week 1, could the former 1st round pick take advantage of the opportunity?

June 6 - ESPN’s Matt Williamson Ranks each NFC Team’s Offseason. The Rams faired rather well, but it was two other NFC West teams that stole the spotlight. One is not who you’d think it’d be…

June 7 - Clarification on the Isaiah Pead Suspension. The Rams’ 2nd year RB was arrested for a Marijuana possession… a year ago. The Rams already knew about it.

June 8 - Titus Young Was Still a Ram. It’s quite possible he was studying the Rams’ playbook on his cot…which was disgustingly close to his toilet.

June 9 - Cortland Finnegan Picks Two Teams For the Super Bowl. The Rams are one…do you remember the other?

June 11 - An Offseason Q&A With the Seattle Seahawks. SB Nation’s Field Gulls provides some great insight on the Seahawks’ offseason, and thoughts on the Rams.

June 11 - Two WR’s Steal the Spotlight at OTA’s. Tavon Austin was - of course - one of them. The other may have been a surprise…

June 12 - An Offseason Q&A With The San Francisco 49ers. SB Nation’s Niners Nation provides some great insight on the 49ers’ offseason, and thoughts on the Rams. 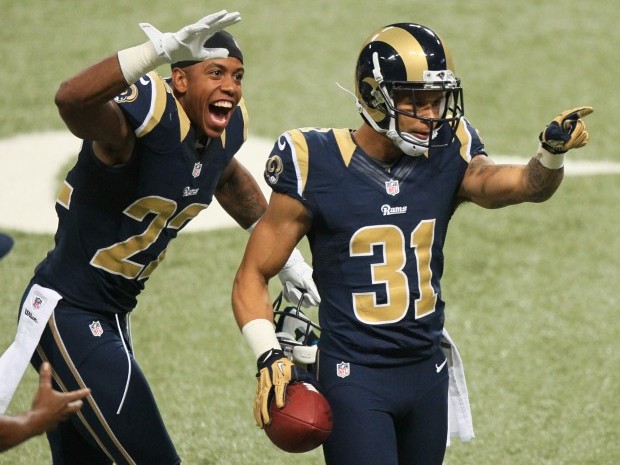 June 14 - The Rams sign Safety Matt Giordano. In a bit of a surprise move, the Rams sign a veteran safety.

June 20 - Nine Must-Win Games For the Rams in 2013. Just one man’s take on what needs to happen in the upcoming season.

June 27 - NFL.com’s Elliot Harrison Has the Rams at 15. Middle of the pack. Standard.