Random Ramsdom: The St. Louis Rams Are Cuttin’ The Fat

We’re only SIX Thursdays away from meaningful football, folks. The St. Louis Rams are already making moves, however surprising they may be. Let’s stop chewing the fat, and get to a buffet of tasty NFL news and notes.

Share All sharing options for: Random Ramsdom: The St. Louis Rams Are Cuttin’ The Fat

First, it was the 400 lb. man, Terrell Brown. Yesterday, it was 2012 5th Rounder Rok Watkins. If you need to unbutton your pants after a meal, you’re not Rams material. Enjoy your dressing-free salad at lunch today, Joe Barksdale!

The Rams take the field for their first public practice at 3:30PM CST on Thursday. Here’s how you can monitor all the action.
The Rams 2012 5th Rd Selection - Rok Watkins - Waived; Bye Bye: Turf Show Times

It was a good run for the Rams’ starting left guard [hopeful]. Not really a run, though, because Rok hated running. He didn’t care much for any activities that didn’t involve a fork. On Wednesday, he hit the showers one last time…but as you know, he did so only so that he could EAT. MOAR. CHICKEN

The Patriots’ Head Coach spoke to the media about the recent transgressions of the Aaron Hernandez case. He takes some level of responsibility, describe his disappointment, and ends it at that…"it’s time for the New England Patriots to move forward." 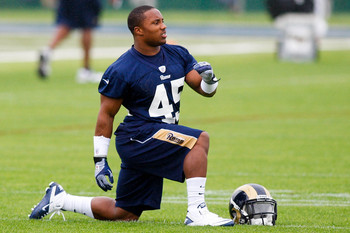 One of the Rams many Undrafted Free Agents, the RB from Middle Tennessee State knows the positions he’s in, and is doing everything he can to take advantage of the opportunity. Benny Cunningham, who many may think is buried on the team’s depth chart, has probably worked harder than most in the offseason. Whether in the gym, on the field, or in the classroom, he doesn’t take days off…

If you don’t have a Twitter account, I’d highly recommend you get one. First, you can follow RG3’s knee situation as closely as you can George Alexander Louis. Also, you can take money from Aaron Rodgers…because he’ll put his paycheck on Ryan Braun. They’re akimbo. They’re bros…

PFF updates is "Page of Fame" at the end of each season, highlighting each positions top scores since 2008. If you’re familiar with their scoring, anything over a 15.0 awards you with recognition. There are 19 spots highlighted in this piece, and three of them are occupied by Mikell. Are the Rams going to miss him in 2013?

Which 1st Round Offensive Rookies Will Contribute Most This Year? National Football Post

If you paid attention to College Football in 2012 - or the 2013 NFL Draft - you’re probably familiar with a few names that could make the list. Which ones comes to mind first? I think it’s almost unanimous…

Adam Levitan highlights a few of the NFL’s top RB-battles to watch through training camp and the preseason. With an added Fantasy Football touch [ADP], Levitan addresses the Richardson v. Pead v. Stacy trio and gives his prediction for the team’s starter.

Two things are apparent to me. Sam Bradford is taking charge of this team, and Sam Bradford and Jared Cook are forming quite the rapport. Between two-a-days and participating in Bradford’s Youth Football Camp, the Rams’ newest TE certainly got a workout, but he also notes the "bonding experience" for himself and other Rams’ offensive players.

Look, I can already tell - seeing as how you’re on Turf Show Times - that you’re a smart football fan. It just makes sense. But, it’s impossible to know/remember everything about the game. I’m fairly confident that you’re very familiar with Feat #1…

I don’t live in St. Louis, but it appears to me as though the Rams are very active in the community, and it should make you proud as a fan of the team. Earlier this week, Mike McNeill visited Ranken Jordan - a Petiatric Specialty Hospital in St. Louis - to visit one member of Rams Nation.

Remember him? He was picked after Sam Bradford in the 2010 NFL Draft. Way after. Like 225 picks after. In his rookie year with the Rams, he recorded 21 tackles and 1.5 sacks. That’s all she wrote. In the past three seasons - in which he’s played in Carolina and Jacksonville - he recorded…the exact same stat lines [21, 1.5]. He’ll now head to Dallas in hopes of sacking Sam Bradford in Week 3. It will not happen.