Taking a look at who the Rams have under center heading into training camp.

Quarterbacks: They're important. Let's do it.

It's not a make or break year for Sam Bradford, or is it? Does Sam wear baller sweaters around attractive women? Yes.

It's unquestioned that Sam Bradford is the starter. He has the best offensive line and the best group of wide receivers so far in his NFL career, but they are unproven and young. Anything could happen with Sam Bradford and the Rams offense this year.

With Steven Jackson's departure, Bradford now becomes the face of the franchise. I can't wait to see how he handles it. 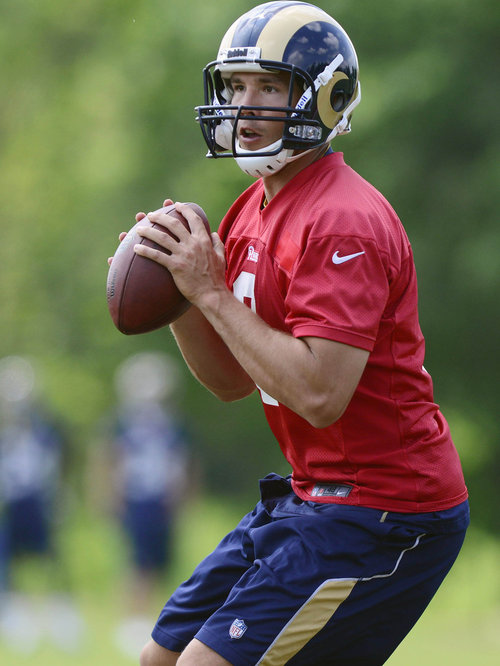 The St. Louis Rams quarterback made an appearance on the Rich Eisen podcast this week. Here are the highlights.

The battle for backup Quarterback

Kellen Clemens vs Austin Davis. Buy your tickets everyone.

Kellen is going into his 8th year in the league. Each year he has been in Brian Schottenheimer's offense. His experience in this system has been very valuable, especially for Sam Bradford. His expertise with the system is the biggest reason he has stuck around with the team, despite a below average skill set.

This offense is about to evolve. Tavon Austin and Jared Cook are going to allow Schottenheimer to get very creative. The offense is going to be very different, making Clemens knowledge of the offense less valuable.

Austin Davis is now going into his second NFL season. He doesn't have a big arm, but he is mobile, and accurate enough to get by as a backup. He has good rhythm to his game, and has shown promise to be a decent game manager option if need be in the NFL. He should win the job.

Now many teams now only keep 2 QBs on the roster, preferring to keep an extra special teams player in their place. This could point towards Clemens not making the team, but Kellen is almost another coach for the Rams. He knows Schottenheimer and what he wants. The offense will look very different, but Clemens' experience with Schottenheimer still has value for the team. I think it's likely he sticks around for one more year as the third QB.

Tim Jenkins played at a Division II college you never heard of (Fort Lewis) and he is a bit on the small side (6' 1", 200 lbs.). He put up some good stats in college, but he is not going to make the team. I wish him all the best luck. May he play in some preseason games, and make some plays so some scout may notice him and put him on their practice squad.