There’s still plenty of NFL offseason to be had before the St. Louis Rams determine the 53 players who will make the roster, and round out the team’s depth chart. While some players are locks as starters, others will soon engage in position battles and look to earn a spot on the starting squad.

I’ve borrowed the idea for this article from Pro Football Focus. Neil Hornsby - found and owner of the site - has been running a daily feature on two NFL teams, displaying their projected starting 22 with player types to match. I’ve modified it just a bit. You’ll notice that Neil’s "Player Type" rating includes a "High Quality" grade. I’ve omitted that rating [which falls between above average and blue chip].

Neil’s feature on the Rams’ looks to be about four days away, which would make it available for your viewing pleasure on Tuesday, July 16th. I got a bit antsy, so here you go... 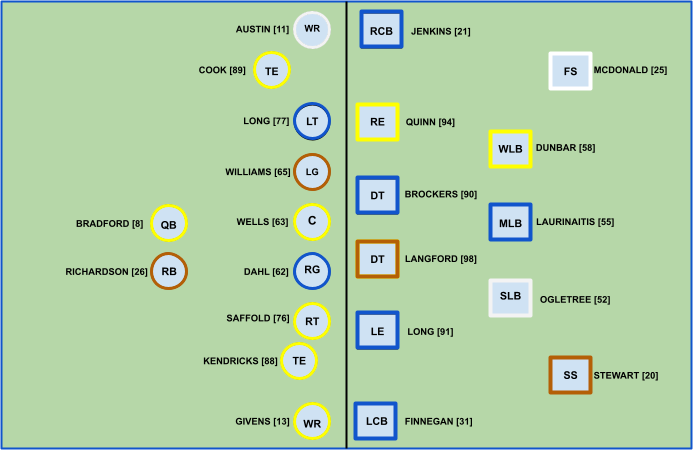 * One of the first things you may have noticed is that WR Brian Quick is not on the field. He’d obviously be incorporated into the offense, but at this juncture of the offseason - coming off a very quiet rookie campaign and being [thus far] out-shined by Austin Pettis - he’s watching from the sidelines. As Ryan Van Bibber pointed out a few weeks ago, it doesn’t really matter.

* Speed kills. In this particular offensive set, the Rams have got to be one of the fastest offenses in the NFL. Jared Cook could be deemed the slowest of the Rams’ receiving threats. His 4.50 combine time, though, will create matchup nightmares for LB’s and Safeties. Put Tavon Austin [4.34 secs] and Chris Givens [4.41 secs] on the field, and defenses may have trouble keeping up.

* There's uncertainty at left guard. I’ve got 2008’s 1st round [14th overall] selection Chris Williams penciled in at the spot. He’s currently working with the first team. Despite being deemed “backup," Rokevious Watkins could be the starter after his Week 1 suspension. Don’t rule out former-Texan Shelley Smith. Regardless of who the Rams plug in at the position, I wouldn’t have changed the color of the circle that surrounded "LG."

* If you’re upset that Sam Bradford is circled in yellow - for average - let’s hear it. I like Sam and I think he’s primed for the best year of his young career, but the decision to color him average was an easy one for me.

* There are only two offensive players who I rated Above average, and they both play on the offensive line. That’s good news. There’s potential for many of these players to quickly jump from their current grade to above average with relative ease in 2013. But for now, the team’s left tackle and right guard are the only players who stand out to me. I’ll admit, if Scott Wells can put together a 16-game season, Rams’ fans will be pleasantly surprised. "If"

* Five of the seven Rams above average players line up on defense. It’s probably not shocking news, as the defense proved it was the stronger unit in 2012, and was definitely bolstered by an A-grade offseason. The Rams had several rookies make an immediate impact last year, and two of 2013’s rookie class look to follow suit.

* There was only one player on the Rams’ roster that I considered on the cusp of "Blue Chip," and it was DE Chris Long. I do think he’s the best player on the team, and very close to becoming a Top 5 [4-3] defensive end in the NFL.

* Kendall Langford and Darian Stewart are the only below average players I’ve graded on the Rams’ defense. Both have played well at times, but have room for improvement. Kendall Langford - who the Rams acquired last year - will enter his second consecutive year in a 4-3 defense and there’s little reason to believe he won’t improve. If he doesn’t, you might start doing some research on College Football’s best DT’s tackle prospects for the 2014 NFL Draft. Darian Stewart has shown flashes at times, but for many, simply having Craig Dahl off the field was an improvement. In all seriousness though, Stewart's been unable to stay healthy. When he is on the field, he’s played well. He can certainly so some damage…

I do realize it’s still early in July, and therefore this is not a prognostication of the Rams’ starting roster. If it were though, I think the Rams find themselves in a very good place. Though the majority of the roster gets an average grade, the ability of the players to better one another on the field quickly makes them eligible for change from yellow to blue.

Too harsh? Overly kind? Consider this your opportunity to play St. Louis Rams: Color By Numbers.