Reaching "50" may be the key to the Rams playoff aspirations for 2013.

Share All sharing options for: Is "50" The Rams' Magic Number?

*Editor's note: I would like to welcome Ramfan1313 to the Turf Show Times staff. He's been a long time fanposter here, and is a great addition. - Brandon Birkhead*

The number "50" has been significant in my life on only two occasions: the day I turned 50 years old (no jumping for joy there), and the first time I was introduced to the elixir of the gods; more commonly known as beer (Labatt 50 Ale, a fond memory of my childhood). In the 45 plus years I have been an NFL football fan, I can't for the life of me associate a player, event or occurrence with the number 50. Until now.

During the off season, the Rams committed a considerable amount of resources to improving an offense that, in 2012, ranked 25th in points scored (18.7) and 23'rd overall (yards gained). Although the Rams lost Steven Jackson, Danny Amendola and Brandon Gibson to other teams, they added Jared Cook and Jake Long as free agents, and drafted Tavon Austin, Stedman Bailey, Barrett Jones and Zac Stacy. The Rams now have the pieces in place to potentially become a top 15 offense and playoff contender in the coming season. Many an opposing defensive coordinator will have sleepless nights, with visions of the following diagram dancing in their heads: 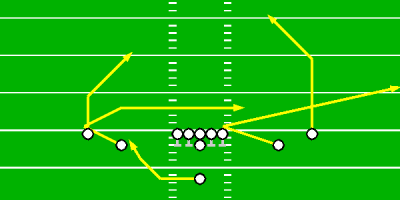 The significance of the number "50"? From an article written by Joe Fortenbaugh on June 18, 2013 for the National Football Post: "The magic number is 50"

"Average a combined total of 50 rushing attempts and completions per game and a winning season will likely follow."

Mike Lombardi is the current General Manager of the Cleveland Browns. He founded the National Football Post, and has written for NFL.com and S.I., as well as having held various executive positions in the NFL for over twenty years. It is Lombardi who has touted the importance of pass completions - plus rushing attempts - per game. His belief is that a good, winning football team will average in the high forties or better in rushing attempts and completions over a season. The accompanying chart (from the article) presents both the highest and lowest ranked NFL teams in terms of average rushes - plus completions - per game for the 2012 season: 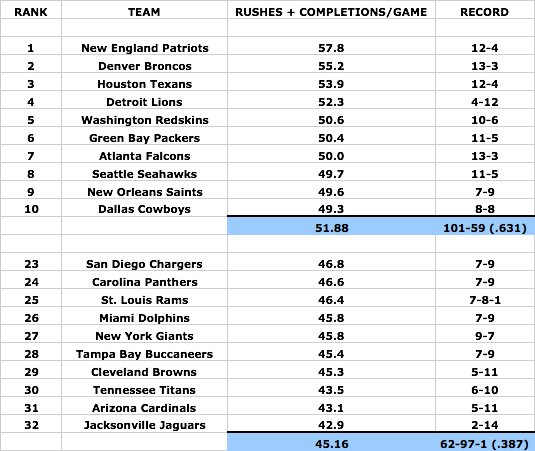 To further support Lombardi's theory, the article expands the sample size by analyzing the last five years of related data:

2. Only five of the 50 teams (10%) that ranked in the top-10 in rushing attempts + completions produced a losing record.

4. The 50 teams that ranked in the top-10 combined to average a total of 51.176 rushing attempts + completions per game.

5. If you take only the teams that averaged 50.0 or more rushing attempts + completions per game over the last five years, you get a combined regular season record of 339-189 (.642), with 22 of 33 (66%) teams qualifying for the postseason. That winning percentage puts a team in between 10 and 11 wins per season."

What must a team do to achieve the magic number of 50 in completions plus rushing attempts?? A pair of statistics lend insight into how a team can reach the magic number.

"So how does a team achieve an average of 50.0 rushing attempts + completions per game? Here are two statistics that appear to play an integral role:

Convert on third down: Of the 33 teams that posted an average of 50.0 rushing attempts + completions per game over the last five years, 22 (69.6%) ranked in the top-10 in the NFL in third down conversions. Move the sticks at a high rate and you’ll have more opportunities to both complete passes and run the ball.

Quarterback rating: If you take a look at the top-10 teams in rushing attempts + completions in the above chart, you’ll notice that nine of those organizations have a quarterback who ranked in the top-10 in passer rating in 2012 (only Detroit’s Matthew Stafford failed to crack the mark). The QB rating criteria appears obvious: Elite quarterbacks produce elite numbers, which leads to a high rushing attempts + completions average."

The numbers behind the numbers

Lombardi's theory certainly holds validity when looked at using his methodology. Does it hold up under closer scrutiny and from different angles? What can we learn about the Rams offense from looking more deeply into his theory?

The article looks at the season as a whole and averages out the completions plus rushing attempts. The accompanying chart breaks down this statistic for each game of the 2012 season: the Rams total for each game, their opponents total, the differential between the two teams, and who won the game:

QBR and third down conversion rankings

It was suggested in the article that Quarterback Rating and 3'rd down conversions play an integral role in achieving the magic number "50". The following chart looks at the top three teams on the completions/rushing attempts list, the bottom two teams on that list, and the St. Louis Rams. For each category, the statistic is accompanied by the league ranking. The teams overall league ranking for offense is also included.

When looking at the magic number "50", it's meaningful to look at the number (and percentage) of rushing and passing plays a team ran during the course of the 2012 season. How influential is a balanced offense on the completions and rushing attempts statistic, and again - by extension - a teams overall offensive performance? The accompanying chart lists the number (and percentage) of passing and rushing plays for the same teams over the entire 2012 season.

Few quarterbacks have lacked having weapons like Sam Bradford has over the past two seasons.

Not having quality receivers has certainly hurt Bradford's accuracy, but it isn't the only reason why he's completed less than 60 percent of his passes in each of the past two seasons. Bradford needs to become better with his decisions and overall reads in order to improve his accuracy like he needs to.

The most important numbers

Outscoring your opponent is the simple recipe for success in the NFL, with "50" being one of the main ingredients.

Indianapolis qualified for the 2012 playoffs, as a wild card entry, despite a minus-30 point differential, scoring 357 points and surrendering 387. But as history has demonstrated, reaching the playoffs with a negative point differential is a difficult task. Since the current eight-division/12-playoff team alignment was enacted in 2002, only seven of 132 playoff clubs made it to the postseason while allowing more points than they scored.

Given all of the changes in the off season, the Rams will have a much different look to their offense going into the 2013 season. Does the Rams offense now have the potential to reach the magic number "50", as theorized by Lombardi? From the analysis in this article, what will be the most important factor(s) in the Rams improving their offense this season? In 2012, the Rams ranked 25'th in rushing attempts - plus completions. How high will they rank in the 2013 season? A winning record and playoff contention may very well depend on how close they can get to the number "50".