A look at what our friends in the desert did this offseason.

Arizona surprised everyone when they started out 4-0 last season, including a win over the Patriots on the road. The team looked to be real contenders. Then they had to come to St. Louis and play the Rams in primetime. The Rams prevailed 17-3 and sent the Cardinals into a tailspin. Arizona lost its next eight games and finished the season 5-11, last in the NFC West.

More: TST Talks To Revenge Of The Birds

Ken Whisenhunt was fired after the season, and the Cardinals began to rebuild their team. Let's review what they did.

Arizona brought in Bruce Arians to be their newest head coach. Arians took over head coaching duties for the Colts while Chuck Pagano battled leukemia. He led the team to a 9-3 record as a head coach, and won coach of the year. This marked the first time in NFL history that an assistant coach won the award.

Bruce Arians has worked in the NFL since 1988. He was the offensive coordinator for the Steelers from 2007-2011 and was in the same position with the Colt last season, while also filling in as head coach for 12 games.

It's not often a team can bring in last season's coach of the year to be their new head coach, but that's exactly what Arizona did. This is a great hire.

The Cardinals released many players who have played key downs for the team in the past. All in all, Stewart Bradley, William Gay, Adrian Wilson, Early Doucet, Beanie Wells, Kerry Rhodes, Kevin Kolb, John Skelton, and Adam Snyder were released. The Cardinals cleared house to make room for the new players for the new regime.

The Cardinals also lost a very good corner in free agency in Greg Toler, and a couple of marginal contributors in Quentin Groves and LaRod Stephens-Howling.

The Cardinals did counter some of these moves in free agency. They brought in Rashard Mendenhall, who is a talented running back, but he comes with major injury concerns. Yeremiah Bell should compete to be a starter at safety. Antoine Cason had a great year for San Diego, and he will start for Arizona's underrated defense. Trading for Javier Arenas also brings some more talent to a secondary the desperately needs it. Bringing back Karlos Dansby was a very smart move, as he'll bring much needed leadership to the defense.

Carson Palmer Wants to Win Now (Revenge Of The Birds) 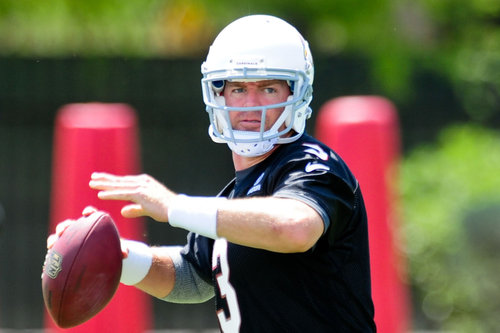 "He Wants to Win" Carson Palmer on Bruce Arians

The big story of course was trading for Carson Palmer. The Kevin Kolb, John Skelton and whoever isn't injured era is over, much to the delight of fans in Phoenix.

Palmer hasn't exactly set the league on fire the last few seasons with Oakland, but he has been very solid. His completion percentage has been over 60% the last two seasons, and every year of his career except 2008. He even managed to throw more than 4,000 yards last season.

Palmer is not a great QB, but he also is not close to being a bad one. He is a solid veteran who Bruce Arians should be able to get production our of for the next few years with all the great weapons for him to throw to. He's accurate and has the arm to throw the ball deep down the field. Larry Fitzgerald is going to love him.

Arizona had a very risky draft. I am a big fan of the Jonathan Cooper pick. But when you pick a guard in the top ten, he better be a pro-bowl player. Kevin Minter will be a solid LB in the defense and could be a day one starter. Alex Okafor has a lot of talent that can be refined. Stepfan Taylor and Andre Ellington provide insurance at RB with the injury issues of the others tailbacks on the roster.

The Tyrann Mathieu pick is dangerous, and not for his off the field issues.

The Tyrann Mathieu pick is dangerous, and not for his off the field issues. The Cardinals are switching Mathieu's position from CB to FS. He also hasn't played in over a year. Furthermore, he is very small for a safety. I don't see him producing much as a rookie in 2013. He will be a useful piece on special teams, but I can't see him providing much on defense.

He is challenged to learn a new position he didn't play in college, all while being out of the game for over a year. The speed of the game is much faster in the NFL than in college, and I think he would have a few issues readjusting to the college game. Asking a player to come into the NFL and contribute after taking a full year off from football is ludicrous, but that is what Arizona is doing.

Arizona is taking on a big project here. They only used a third round pick on him, but there were many other players on the board who could have contributed, and who furthermore wouldn't have brought all the media attention that Mathieu will.

Managing the media frenzy around Mathieu is just as important as developing him as a player.

I like what Arizona did this offseason. They brought in a great coach, who will install an offense that is simple, but effective. Carson Palmer isn't anything exciting, but with Larry Fitzgerald and Michael Floyd on the outside, he won't have to be. They did take some risks in the draft, but risks have to be taken to turn a team around quickly.

Arizona's defense will be improved over last season, due to a big upgrade at corner. Their defense line is better than most. Darnell Docket and Calais Cambell will continue to be major annoyances for the NFC West.

In the end though, I think the Cardinals are at least another year off from contending. They will be better than most think, but they are in the wrong division right now. The NFC West is too strong for a team with as many new pieces as Arizona to be contenders.

They have taken a step in the right direction and will be a team that catches opponents off guard in 2013.