After Sam Bradford takes the first snap for the St. Louis Rams in 2013, it’s anyone’s guess as to who touches the ball next…

Share All sharing options for: St. Louis Rams: The First Snap of 2013

Since being drafted with the first overall pick in the 2010 NFL Draft, Sam Bradford has been under center for the first snap in of each of the Rams’ season openers. In 2013, it’s anyone’s guess as to who will touch the ball after Bradford does.

One thing is for certain…it’s going to be someone different than in the past four years.

Sam Bradford takes his first snap with 7:46 remaining in the 1st quarter. He hands off to Steven Jackson - who attempts to run off tackle - for no gain.

Sam Bradford takes the first snap with 11:22 remaining in the 1st quarter. He hands off to Steven Jackson who runs a counter to the weak side. 47 yards later, Jackson finds himself in the end zone. 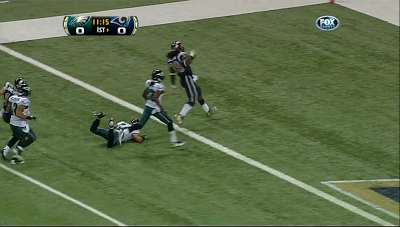 Sam Bradford takes his first ever snap in the NFL with 10:50 remaining in the 1st quarter. He rolls out left and connects with WR Mark Clayton on a 13 yard out route. Rams fans rejoiced as the questionable shoulder of their rookie QB didn’t pop out of it’s socket.

If you care to remember the pre-Bradford era… Well, you don’t, but I’ll remind you anyway. This game started off with the Seahawks kicking off to Donnie Avery. He fumbled it, and the Seahawks recovered. A solid start.

The Rams defense was able to prevent the Seahawks from scoring, as James Butler ended what looked to be an imminent point-scoring "drive" when he intercepted a deflected ball in the end zone.

Alright Rams! Get it together. First down. A fresh start. Let’s get after it!

Bulger takes the snap - hands it to the best player on the team - and [if you care to remember the offensive line from 2009…ugh, nevermind] Jackson tried to find room off center, but only managed to gain 1 yard. 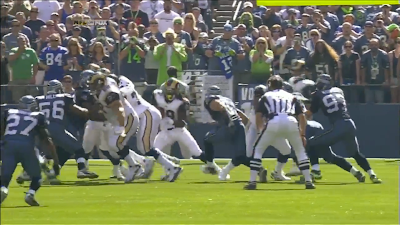 Giving the ball to Steven Jackson on the first play of the season opener appeared to be an easy decision for the coaching staff. They won’t have the luxury of handing it to the Rams’ all-time leading rusher in 2013, though.

Will one of the Rams’ young RB’s get the call on 1st and 10? Will Bradford connect with Chris Givens on another 50+ yard pass? Will Tavon Austin take an end-around 80 yards to the house, making some of his WVU highlights an afterthought?

You make the call.