St. Louis Rams: “Who” Will Lead This Team?

The St. Louis Rams were a much improved team last season, and - with a strong offseason - look to build upon an already respectable finish to 2012. Who’s going to lead this team?

Share All sharing options for: St. Louis Rams: “Who” Will Lead This Team?

Who Will Lead The Team In Carries?

It’s no secret that the Rams will be missing a certain someone in the backfield in 2013. With Steven Jackson gone, the Rams will look to a trio of young running backs to step up. They’re going to have to earn their carries, though. The competition battle at running back is one of the most intriguing to monitor this offseason.

And though the Rams will utilize a running-back-by-committee approach - at least to start the season - one can’t assume the team will simply split SJ39’s [257] carries into thirds. Someone is going to step up, or go by the wayside.

How’s it going to unfold? And who do you see leading the Rams in carries in 2013?

Who Will Finish The Season With 700+ Receiving Yards?

As you can see, a couple of the Rams’ wideouts have come close, yet haven’t quite been able to hit 700. Does it really matter? Nope. But it’s still hasn’t happened in five years, and it’s about time that someone ends this streak.

In what looks to be a more pass-happy offense, which Rams’ receiver[s] will eclipse the very elusive 700-yard mark in St. Louis this year?

Who Will Lead The Team In Touchdowns?

Without looking, could you tell me who scored the most touchdowns for the Rams in 2012? Well - for the honest and the cheats - the answer is Miami Dolphins’ WR Brandon Gibson [5]. And not that anyone would’ve figured him the leader [again] this seasons, but a new name will transcend in 2013.

With Steven Jackson gone, does one of the Rams’ young running backs punch it in when called upon? Will Jared Cook be Sam Bradford’s new red zone target, or will Brian Quick become the team's big-bodied red zone threat? Tavon Austin was the most exciting player at WVU, but it was Stedman Bailey who lead the team in TD’s [25].

I wouldn’t rule Janoris Jenkins out of the equation…

Who’s going to lead the team in TD’s this season?

Who Will Lead The Team In Sacks?

Two names: Chris Long and Robert Quinn. Let’s not kid ourselves… it’s going to be one of these two players, and I’d be willing to bet that each one is wishing the other the best of luck.

Luck is probably something that neither need - considering their pass rush abilities - but being in the right place at the right time certainly won’t hurt statistically. Long lead the team in sacks in 2012 with 11.5, while Quinn finished a close second, one full sack behind at 10.5.

The Rams lead [in a tie] the NFL in sacks last year, and in large part due to the efforts of these two stellar defensive ends. The team will look to build upon last year’s 52 sack total, and one of these players will end the season as the team’s sack leader.

Who’s it going to be?

Who Will Lead The Team In Tackles? 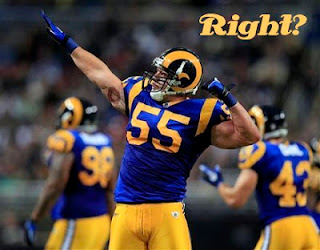 Who Will Lead The Team In Interceptions?

Janoris Jenkins was everything Rams’ fans expected him to be in 2012…and in his rookie year. He lead the team with four INT’s, three of which he converted into six points. There was a bit of [character] concern when drafting Jenkins, but the "reward" portion of the risk/reward draft combo paid dividends last year.

And though many will point to Jenkins as the Rams’ CB to lead the team in INT’s in 2013, let’s not forget that - playing on the opposite side of the field - Cortland Finnegan had three INT’s himself. Matthew Stafford could probably give you a better first-hand description of one of those picks.

Both JL55 and Jo-Lonn Dunbar tallied two picks a piece last year. Could adding rookie Alec Ogletree - who excelled in coverage as a LB, due to experience at safety - to the mix make him a candidate for most picks? With his speed and athleticism, he certainly shouldn’t be ruled out.

And how about those safeties? Veteran Darian Stewart along with rookie T.J. McDonald look to be slated as starters… but what can you really expect from either? Stewart has had one INT in his three-year NFL career, and McDonald has yet to step on the field as a pro.

Lastly, four INT’s by Jenkins - especially in rookie, record-setting fashion - were impressive, but they were far from leading the NFL. Chicago Bears’ CB Tim Jennings lead the NFL with nine INT’s, while Jenkins finished the season tied for 11th.