Colin Kaepernick threw out the opening pitch at a San Francisco Giants' game on Friday night. It clocked at 87 mph. So what?

If you were under the impression the spotlight shining upon 49ers QB Colin Kaepernick couldn’t shine any brighter, you’d be wrong. He was invited to throw out the ceremonial first pitch in Friday night’s Giants v. Marlins game. The pitch was clocked at 87 mph. It’s Monday…and there’s still hubbub.

In completely related football news, he widened the gap of being the best QB in the NFC West with his heater, when his nowhere-near-the-strike-zone pitch nearly pulverized a camera man’s baby-maker at a higher velocity than Seahawks’ QB Russell Wilson. Wilson - who took the mound earlier this month - threw a much more controlled pitch, but only hit 75mph.

My issue with Kaepernick's pitch isn’t so much his face, or the reminders that he was drafted by the Cubs in the 237th round… it’s his complete lack of accuracy. 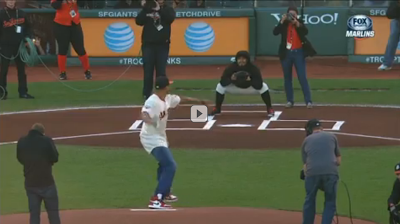 It’s clear the catcher is asking for a pitch right down the middle. There’s no batter, so the chances of the ball being hit are minimized. The probability of a strike is heightened, while the amount of unconscionable signals called is minimized. A great call by the catcher.

As any good showboat would have it, Kaepernick had pre-determined that this wasn’t the occasion to show off his change-up or knuckle-curve. Nah, it was time to bring the heat. You see, his hype had somehow fizzled thus far in June, and this was the perfect opportunity to remind the world of just how great he really is.

And then it happened…

Mmmhmm. Terrible, I know. The red dot placed on the catcher’s knee indicates the original asking point of the pitch. Opposite that is where the catcher preserved one man’s ability to one day have children. Yet you’re not hearing much about the catcher who - in my opinion - is the real star here. Heck, I don’t even know his name.

Put your hands together though, folks. Colin Kaepernick has an amazing arm. Did I mention the Cubs drafted him? How they could let him go - given his ability to tear up the area outside the strike zone - is beyond me.

My takeaway from this most memorable occasion? Colin Kaepernick can throw a baseball pretty hard. The world should take note. BUT, in the right light…if you squint really hard…the cameraman looks a lot like Janoris Jenkins.