A year after ESPN released their initial Future Power Rankings, the Rams have flown up the board from the bottom third to the top...where does the Rams' ceiling over the next few years compare?

Share All sharing options for: The Future is Bright - ESPN Future Power Rankings

About a year ago, four of ESPN's more notable analysts offered their initial NFL Future Power Rankings. Their future rankings looked coincidentally quite a bit like their current power rankings at the time. Despite a pretty rational methodology, the effort came up flimsy. Consider these future power rank (yup) teams: Minnesota at 31, St. Louis at 24, Seattle at 21 and Washington at 20. Oh, and the Jets at 16?

So it needed some polishing to say the least.

As I mentioned, the Rams came in at 24 predicting the 2015 power rankings at these numbers:

To be fair, it was a new regime both in the front office and along the coaching staff, so I won't bemoan the lack of respect among the ESPN judges panel.

Well, a year later and a bandwagon forming, how is the Rams' future looking in the middle of this offseason in gauging the 2016 power rankings (insider subscription required)? 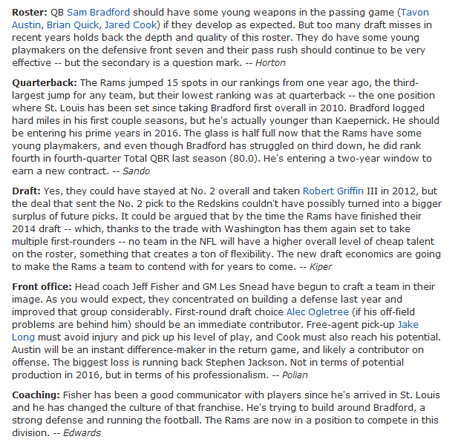 I'm not exactly all that sold that these are completely governed by the future and not last season. Still, I'm more than happy to see the Rams in the top 10 of something that's a positive list.

With training camp just a bit more than a month away, the Rams are approaching the opportunity to begin the process of validating, and dare I say earning, top 10 status.