It’s never too early to take a stab at wins and losses for the upcoming season. The St. Louis Rams play in a very tough NFC West, and [for a multitude of reasons] it’s difficult to gauge end-of-season results in June. With that being said, I’m predicting nine ‘must win’ games for the Rams in 2013…

Share All sharing options for: Nine “Must Win” Games For the St. Louis Rams In 2013

Nine is the absolute minimum figure. Nine wins could squeeze the Rams into the postseason, but it’s not going to win the West. An 8-8 season eliminates them from playoff contention, as I think both the Seahawks and 49ers are easily capable of hitting double digit wins in 2013, and several other NFC teams will be at [or above] nine wins by season’s end.

You may or may not agree with these games being ‘must win,’ because clearly - at this juncture - they’re not. There are several games I think can go either way, but I’m ready to give the Rams the nod in these nine games… 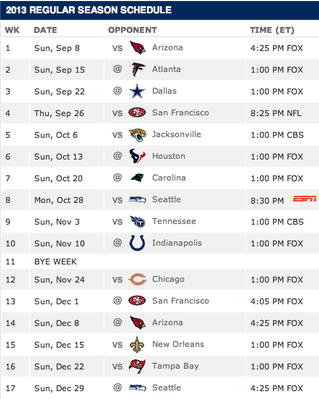 Week 1: Arizona Cardinals at Home - It’s a tone-setting statement game, and it must happen. The Rams owned the Cardinals in 2012, and they cannot afford to lose in the team’s home opener. The Cardinals are going to be a formidable opponent in 2013, but it’s going to take time for all the new pieces to gel. The same could be said about the Rams’ offense. Their defense, however, could come out in midseason form, and will be the difference-maker in Week 1. Offenses typically look sloppy in the early stages of the season, and therefore this one will be closer than fans would like. Final Score - Rams: 21, Cardinals: 16

Week 3: Dallas Cowboys Away - Coming off of a probable Week 2 loss, and looking to host the 49ers in Week 4, I’m deeming Week 3’s contest against in Dallas a must win. The Cowboys - who finished 8-8 in 2012 - are going to be no easy task, especially on the road. The Cowboys - offensively - were very good last year, finishing 6th in the NFL in total offense. The Rams’ defense will be up to the task, as Tony Romo does what Tony Romo does best…throws a game clinching INT. Final Score - Rams: 27, Cowboys: 24

Week 4: San Francisco 49ers at Home - I’ll leave in-depth, in-game prognostications aside, and simply say that the Rams cannot be swept by the 49ers this year. It’s certainly a possibility, considering the 49ers were the best team in the NFC in 2012, but the Rams need to [at least] split the series this year if there’s any hope for a postseason. They held their own with the 49ers last year, and need to make a statement at home in Week 4. When the dust settles, you can feel free to turn on SportsCenter on Friday morning… the Rams will have just beaten the world-beaters on Thursday Night Football. Bold Prediction: Tavon Austin will score the games final touchdown after embarrassing Craig Dahl. Posters available Sept. 27th. Final Score - Rams: 17, 49ers: 13

Week 5: Jacksonville Jaguars at Home - This might as well be bye-week. The Rams are going to have a field day on Sunday, October 6th, and unfortunately it’ll come at the expense of the team from London Jacksonville. The Rams' defense will show off it’s dominance, and offensive kinks will start to develop into back-breaking plays. There may be an Austin Davis sighting…
Final Score - Rams: 34, Jaguars: 16

Week 7: Carolina Panthers Away - The Panthers will be far from a pushover nearing mid-season. Their offense - lead by Cam Newton - is dynamic and can make game-changing plays in the blink of an eye. Their defense - which was top 10 in 2012 - should not be ignored. The difference, for me, is that the Panthers’ offense is fueled by Newton and his ability to make plays with his legs. The Rams have had plenty of practice defending mobile QB's and are going to thwart efforts that would’ve otherwise been successful against teams who aren’t prepared for QB’s with a set of wheels.
Final Score - Rams: 24, Panthers: 17

Week 8: Seattle Seahawks at Home - I could probably just copy and paste my response from the Week 4 matchup with the 49ers. Both of the Rams’ NFC West foes are already being penciled into 2014 playoff brackets. If the Rams stand any chance of making the playoffs, they’re going to [minimally] need splits against teams like the 49ers and Seahawks. They’ve had little success winning in Seattle, which just so happens to be their final game of the season [again], and therefore Week 8 is a must win. The good news is that Russell Wilson won’t feel overly comfortable in the Edward Jones Dome. Last year he threw 3 INT’s and finished the game with a 45.8 passer rating; his second lowest on the year. The defense will take the NFL league-lead in sacks, and it will go down on Monday. Night. Football. Final Score - Rams: 23, Seahawks: 20

Week 9: Tennessee Titans At Home - Oh, how the tables have turned. It’s been some time since Jeff Fisher has coached on a sideline with the Rams and Titans on the same field. [Must See: The Tackle]. The Titans are an up and coming team, but they’re no match for the Rams. Jared Cook will score his 5th touchdown of the season on this day. For old time sakes, I’ll give you the final score exactly how "The Tackle" left my fondest memory as a Rams’ fan.
Final Score - Rams: 24, Titans: 16

Week 14: Arizona Cardinals Away - It’s a tough call asking for a second consecutive win [and series sweep] against the Cardinals. I’ve got a lot of respect for what they’ve done in the offseason, whether it be players or coaches, and feel they’re going to be very competitive in the very near future. But for 2013, I think they’re too early in the ‘piecing it together’ stages to be able to contend with the Rams…who are still in playoff contention at this point of the season. A loss to the Cardinals - which isn’t out of the question - would be devastating at this juncture of the year. The Cardinals may try to play spoiler in December, but the Rams must win this one…
Final Score - Rams: 27, Cardinals: 23

Week 16: Tampa Bay Buccaneers at Home - Shutting down Doug Martin is a tall order, but if the Rams - still keeping their playoff aspirations alive - are able to contain the Bucs' RB, winning this game should be a cinch. The Bucs had one of the worst defenses in the NFL in 2012 [29th]. I’m sure they’re working on addressing the issue, but the Rams offense will be putting up points late in the year, and the Top-10 defense will still be doing what it does best…keeping opposing offenses off the field. Final Score - Rams: 27, Buccaneers: 16

Finishing 6-2 in the EJD in 2013 is a respectable result. The Bears are a very good team that match up well with the Rams on both sides of the ball. The 2012 contest wasn’t close, as the Bears held the Rams to a mere six points. The Rams could win this home game - taking their win total to ten - but the Bears’ defense could also stifle the Rams [again] coming off a bye.

I gave the edge - in terms of must win - to the Bucs for two reasons. First, the Saints have one of the most explosive offenses in the NFL, and trying to keep up [in terms of points] may be a tough task. Second, both the Bucs and Saints defenses were atrocious in 2012, but the Bucs lost their best defensive back [Ronde Barber] and Rob Ryan can’t lead as dismal a defense as Steve Spagnuolo did. It’s a coin flip, but a loss to the Saints wouldn’t surprise me, therefore making a win in the next week that much more a must.

It’s simple. Beating the 49ers and Seahawks on their turf is going to be difficult. They’re not must win games, but if the Rams are able to snag a win on the road [against these teams] it bodes well for their chances of making the playoffs; assuming they hold their own at home.

Week 2’s matchup against the Falcons is going to be difficult. It’s also going to be odd seeing Steven Jackson - the Rams’ all-time leading rusher - on the field at the same time as the Rams’ defense. He could also be the missing cog that takes the Falcons to the next level. As a fan of Steven Jackson [the man], I hope he is. Aside from SJAX, though, the rest of the Falcons offense has far too much talent for me to predict a Rams’ win. It would be nice, but a must win it is not.

As far as out-of-conference games, I don’t see the Rams beating the Texans. I don’t think the Rams will be blown out by any team in 2013, but beating the Texans on the road ranks up there with beating the 49ers and Seahawks in their house[s]. All of these teams have tremendous defenses, and I’m not sure if the Rams can do enough in Week 6 to outscore the Texans at home.

Another winnable - yet not must win - is the away game with the Colts prior to the bye. It would be very nice for the Rams to beat this team heading into their off week, but on the road against the Colts may prove difficult. The Luck-lead Colts’ 2012 turnaround [11 win] season was not a fluke. They’re a good team, I don’t expect to see Andrew Luck fall victim to the dreaded "sophomore slump." Winning in Week 10 would be nice for momentum, but it’s not a must win.

Again, it’s June, so it may be a tad early for regular season predictions, and nine wins may not cut it. The Rams could be in the hunt for the playoffs in 2013, but they’d better plan on winning [at least] the nine aforementioned games.