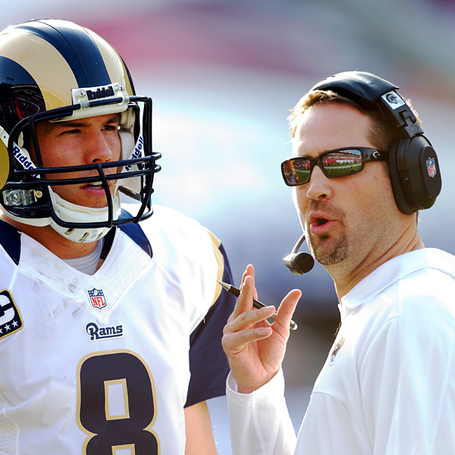 Having finished the OTA’s last week, the Rams are now off for the summer; and I have to agree: We are definitely left in limbo. In the meantime, we can answer one another's questions, without ever answering one another's questions, because we are answering by asking questions. Er, uh? Let's move on... Isn't that annoying when someone answers your question with a question? Well that's exactly what I'm going to do.

1. Can The Rams' Defense Lead The NFL In Sacks [Again]?

Answer: Can the offense be dominate enough to force teams to have to pass?

Let's get the obvious out of the way: Our D-Line is goooooooood. And we have linebackers who can get to the QB as well. Hell, even our DB's seem to be good at creating pressure. So yeah, our defense is pretty amazing. But what will it matter if they never get the chance to show how amazing they are?

Now, that's not to say I feel the offense will struggle, but every D-Lineman will tell you their favorite time is when the offense is playing catch up. If the Rams can click earlier - rather than later - with all the new pieces, and with the talent we have on defense, it can be week 5 of last season every week.

But all of this only happens if the offense gels quickly. Let's remember: the Rams have a very young offense, with a lot of new pieces, and a coach that doesn't believe in pushing his team to hard with practice. Look at it this way: had we had a mini camp that would have been three extra days for all these new guys to gel.

So the truth is, the Sack total relies a lot on the offense. Not just our skill and talent on defense.

Initially I thought of two questions here. The first being the offensive line, and the second being: Will the young and new offensive weapons develop a quality chemistry with Sam?

While both questions deserve to be answered, the truth is I'm not nearly as worried about the guys Bradford will be throwing to, as I am the ones protecting him. And though I have a hard time believing the line will have health issues for the fourth consecutive year, it just so happens if a game were to be played this weekend, 4 of 5 of the Rams' starting linemen would be on the injury report. The one not on there, is the one who plays Left Guard, and that's because no one knows who that will be. The other 4 are still not 100% from previous injuries.

So, that's just something to think about.

3. Can Brian Quick Be Who The Rams Need Him To Be?

Answer: Can someone please tell me if it really matters who starts at the WR positions?

A lot has been made of the glowing reviews Austin Pettis has received this off season, but in the wrong way. Instead of tipping the hat and giving praise to the hard work he has put in this off-season, people seem to be annoyed.

The annoyance isn't necessarily because he has performed so well, but because he is not the one everyone "WANTS" to be doing so well. Everyone wants Quick to be dominating. It's as if, if he doesn't step up, the team will fail or something? He didn't play much last year, so he's had few "reps", so him very inexperienced going into this season. So why the hell would people be surprised that someone, who has played a significant amount of time since his rookie year, would be having a better off-season and be further up on the depth chart?

At the end of the day it doesn't matter. In this new offense, the wide receiver rotation will be heavy. Spread formations are based off of multiple - oft times confusing - packages, so you change your personnel a lot. In fact, Pettis could technically be the starter and play fewer snaps. Starter or not, Quick's role in certain packages will not change.

Oh, and FYI: I'm going to go ahead and toot my own horn. I have been talking about the good things I expect of Pettis this year, long before the good reviews. I definitely saw this coming. He clearly was a factor in training camp the last six weeks and is entering the wide receiver golden year.

4. Can Tavon Austin Win The Offensive Rookie Of The Year Award?

Answer: Can Brian Schottenheimer prove to be creative enough to use Austin the way he is meant to be used?

If he can prove to be creative "enough", Austin getting the OROY award may just be the beginning, as old Schotty Boy may play call himself right into a head coaching job.

5. Can The Rams Make The Playoffs?

Ahhh, the million dollar question. There's no doubt the attitude, toughness, and hunger the team played with last season, was a direct result of the mentality Jeff Fisher brought to St. Louis. But let's not down play the on field leadership that SJ39 brought to the table. If you think that his locker room presence had nothing to do with it, then you're fooling yourself. Without Jack, there is no Daryl Richardson. Just being honest...

He took young Daryl under his wing, and they spent a lot of time with each other. He even referred to him as his little brother. This is clearly a team of adoptions because Sam was thrown in that category by Jackson too. It showed, as you saw Sam doing things you'd only seen "Jack" doing before. Like stepping up and speaking out, or getting on his teammates (he called out Givens one-on-one after his suspension vs San Fran).

But without SJ39, he will be looked to for more leadership, and ultimately expected to call more guys out, and not be so nice. It's tough giving out that "big brother love". It can be mean at times, but it hits home and works. Also, he'll be taking guys under his wing, and spending time with them away from the field, much like Jackson did with Richardson.

If you can answer yes to 9 out of the 10 total questions, what type of record do you see the Rams finishing with this season? And out of 32, where can you see the Rams' offense and defense finishing the season rankings?