Every draft, there's always that one player that surprises everyone. This year it was T.J. McDonald. Graded as a late round choice by many analysts, McDonald was drafted in the 3rd. Here's why the St. Louis Rams decided to draft him.

With the 71st pick in the 3rd round, the St. Louis Rams selected former USC safety T.J. McDonald. The pick was a surprise, no matter how you felt about McDonald as a player. Many people didn't see him as a 3rd round pick. Also, many people figured that the Rams would draft a better coverage safety, Bacarri Rambo.

Honestly, it was a move that had many people scratching their heads, but the Rams could end up out smarting everyone with the selection of McDonald.

McDonald will be a starting safety this season, after the team lost Craig Dahl and Quintin Mikell this offseason. That he was drafted too high doesn't matter anymore; all that matters is how will McDonald perform now that he's a Ram. It's impossible to tell at this moment, but here's a look at how the Rams could use him this season.

How was McDonald used at USC?

Why did the Rams draft McDonald in the 3rd round?

Was McDonald drafted higher than the experts thought? Were they wrong? Not quite. If the Rams use McDonald in Mikell role last season, he should be better than expected. For those who don't remember Mikell was in the box, helped cover in the slot, and was a good blitzer, all things that McDonald excel at. In fact, he was the perfect safety for that role.

How will McDonald fit with the Rams?

McDonald is 6'2, 219 pounds, and ran a 4.59 40 at the combine. McDonald should be used in the box, he looked natural there in his senior season. It's not a bad thing, he just doesn't look like a pure centerfielder at safety. If he's in the box, he will still make impactful plays, as when Mikell played it. 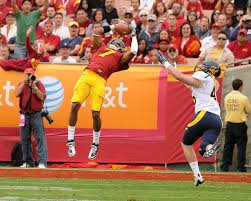 He's good in man coverage against TE's, but he shouldn't be left alone with great slot receivers. Rams can use him in deep coverage, but that's not his strong suit, in fact it's the main area where he needs coaching up, and why many analyst were down on him. 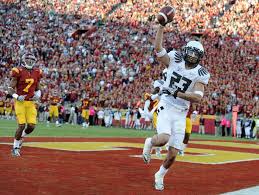 It's no secret that I've seen a good fit for McDonald with the Rams for some time. I had him going to the Rams in my very first 2012 mock draft back in May 2011. A year ago, I had him coming to St. Louis in my first 2013 mock. Needless to say, I'm down with the selection.

There are things he possesses that you can't teach - frame, speed, burst. His father, Tim, was a successful safety at USC and in the pros; he's now the new defensive backs coach with the Jets. His brother, Tevin, recently got booted from the UCLA team for a rumored third failed drug test and has transferred to Eastern Washington. This is a football family, folks.

As for T.J. specifically, he's more than willing to play physical. And yes, as has been widely noted, he's been burned a couple times for trying to make the big hit. That's not a horrible instinct to have -- it's largely incumbent on the coaching staff to help a player like T.J. straddle the fence between a lack of discipline and a lack of aggression (this horrible, horrible rap song has something to do with this...), so I don't completely begrudge T.J. here. How often did we decry Craig Dahl's lack of ferocity last season? That's not something we'll have to worry about with McDonald. More concerning is the lack of one-on-one cover skills against quicker targets. He matches up well against tight ends (despite receiving notable derision for his inability to stop a Michael Williams TD catch in the Senior Bowl, an eventual 7th round selection for the Detroit Lions), but has issues with the quicker, shiftier guys underneath.

I'm just interested to see how the Rams employ him. With Alec Ogletree, I expect to see some more conventional 4-3 looks (at least in the preseason) - perhaps that gives McDonald liberty to sit deeper and have Janoris Jenkins and Cortland Finnegan press up a bit...ending the Rams' 2012 penchant for giving WRs 6-yard cushions on 3rd and 2 wouldn't be the worst thing ever.

And anytime you can add the Ghetto Flash to your team, it's hard to say no.