Random Ramsdom, 4/29: Where have all the OTAs gone?

Relax, everyone's getting a real taste of the offseason this week. Let us ease you into it.

Share All sharing options for: Random Ramsdom, 4/29: Where have all the OTAs gone?

In case you're wondering if the St. Louis Rams were picked up by a spaceship and carted off to cavort with Colin Kaepernick in another dimension, let me assure you that, no, this has not happened. The Rams are merely off this week. Hot shorts action resumes next week when OTAs pick up for another round.

Without OTAs, there isn't much to be irrationally exuberant about. But there's plenty of crap on the internets to keep you occupied. There always is.

The Rams have a special edition paintball gun in the works. It's hard to believe that the NFL hasn't already done that for a branded product since you can get anything from thong underwear to inflatable chairs with team logos on them. This gun is part of the team's paintball fundraiser for the St. Patrick Center on June 8. Funds raised will benefit needy families preparing to go back to school.

There's some funny old saying about statistics. I don't remember it. I believe it's something like, "Get these damn numbers outta my face ... I've got scouting reports to read." Anyway, Cian Fahey has a strong take on the intersection of stats and performance.

Personally, I hate the NFL moving the draft to May. But who cares about my personal life. At any rate, the guys over at Mocking the Draft actually make a pretty good case for the switch.

Wait, animals die in 'Animal Farm'? What happened to our vision of barnyard utopia? I don't believe in nothing no more; I'm going to law school.

Guess who led the Rams in return tackles last year? Undrafted free agent safety Rodney McLeod. He had 12 of them, nine for stops (a downfield tackle for less than an average return).

We need to talk about The Olds. The NFC West isn't a place with lots of elderly players, you know people in their 30s ... like me! Sando breaks down the age question a little in a post this morning. The Rams have two players among the 10 oldest in the division: Harvey Dahl and Scott Wells. Both are currently recovering from injuries. Both command a total of $10.5 million in cap space this year. So yeah, it's a big year for Barrett Jones too.

Heat vs Pacers is the NBA 2013 Championship game. Great series!

@norcalalex Winner of this series will win the title.

The man does not like the Spurs. But he does like sports cliches. Notice something else here? There's a solid 8th grade grasp of the language in both these tweets. #woo

This was actually the Browns' logo or mascot or whatever in the 40s and 50s. 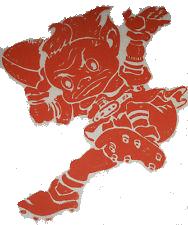