We’re inching ever so closely to this Thursday’s NFL Draft. With only five days left, let’s take a look at the 5th round selections the St. Louis Rams have made since their move back to The Show-Me State.

This past Friday, we started the countdown to the draft by 7th round selections that the Rams have made since 1985. Yesterday, we highlighted the 6th rounders. Something that should be noted is that the Rams 6th & 7th round draft picks - over the past 18 years - have accounted for 32% of their entire draft [21.1% in the 7th, and 10.9% in the 6th].

With five days remaining until the 2013 NFL Draft, let’s have a look at what St. Louis has done in the draft when they’re on the clock in the 5th round... 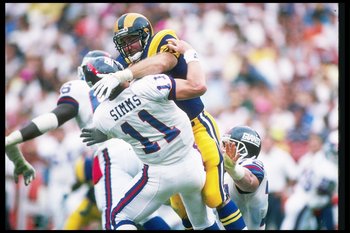 Greene, a member of the LA Rams, is far and away the creme de la creme of Rams 5th round selections. With nearly two decades in the books since he was originally drafted, there aren’t many 5th rounders - Rams or otherwise - who played with the tenacity that Greene did.


In regards to what else there is to discuss when discussing the Rams and their 5th round picks since 1995...well, Rokevious Watkins is the only one still around. Rok probably would’ve earned the starting left guard spot last season, though an injury on opening day landed him on the IR list for the remainder of the season. He’ll look to earn it back this offseason, though mocks-a-plenty have the Rams looking to take a guard the likes of Chance Warmack or Jonathan Cooper. If this were to occur, the chances of Watkins providing more for the team than his 5th round predecessors become slightly more difficult.


Brian Young, who joined the team in 2000, did play in every game for the team from 2001-2003. On November 9, 2003, Young tied an NFL record with three fumble recoveries against the Baltimore Ravens and was named the NFC Defensive Player of the Week.


These guys aside, and much like many of the later round draft picks from the past several years, the Rams simply haven’t had much success in finding serviceable players. The lack of tenure from the list above is a direct correlation.


What do you think about the 5th round haul over the past 18 seasons? Are there players on this list that you would’ve liked to see the Rams retain? With minimal retention in the 5th, who should the Rams have drafted instead of the guys on this list?


Change the channel if you must, but check back in at Turf Show Times tomorrow. We’re counting down the St. Louis Rams drafts picks by round for each day that remains until the April 25th draft.