Menelik Watson visited with the St. Louis Rams, is he worth the team drafting him? Well let's find out.

Menelik Watson is an interesting prospect. From Manchester, England, has only played football for two years and he's being rumored to be a first-round pick next week.

It's not surprising because the NFL loves athletic specimens, and Watson really is one. He played basketball in Spain, after he quit soccer. He didn't play football after his basketball stint; instead, he went to boxing. Most likely because he figured that boxing was a dying sport (that's for you Joe), he decided to play football. He went to Saddleback junior college where he was a teammate of Kyle Long.

He's raw and has only been playing football for 2 years. 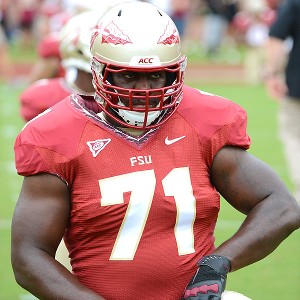 Mr. Watson is a potential first round pick, with a lot of upside.

Good at getting to the second level

Light on his feet

Doesn't give up when pass blocking

When he's beat, he can maneuver the player away from the quarterback

Doesn't know who to block in the second level

Looks confused at times, probably miscasted in a zone blocking system in college

Run blocking is a huge weakness overall for him

Inconsistent off the snap sometimes he's quick other times he's not

Technique needs work, hands get's to outside a few times.

Can be beat by speed rushes to the outside, moves toward the inside of him, and also bullrush.

Can be overwhelmed at the POA

Only saw him once in goalline, 2 out of 3 or 4 plays he got dominated

Sometimes lack of killer instinct, 2:03 in the N. Illinois game Watson has the defender on the ropes and just stops and slowly walks.

Watson is R-A-W, it makes sense because he only played two years of football. I would say that he's more athletic than he's former teammate Kyle Long, but Long will probably be better out the gate. Watson is a good pass blocker, but his technique and all of his negatives weigh his grade down to me. Granted, it's easy to see why teams like him, he has the size, and although he was raw he wasn't horrible. He looks like he could play left tackle. An offensive line coach will fall in love with his skill set, and I think many of his flaws are fixable.

Should the Rams draft him?

Maybe. He has high potential and the Rams offensive coach can work with him, I mean he made the offensive line look average using backup players. With Jake Long and Rodger Saffold on the roster, Watson could spend a year behind those two learning the ropes. Watson will most likely be drafted in the first round, I would have a concern with that, but it sounds like there could be a run on offensive linemen. So if the Rams want to add Watson it wouldn't be a horrible pick, but it could make fans scratch their heads.