The USC product may be one of the prospects the Rams look at to fill their need at wide receiver. We'll be taking an in-depth look at his skills in this scouting report.

Robert Woods is an interesting prospect. Coming into his senior year he was one of the top free agent options around. However, with his ankle injury nagging him of speed and with Matt Barkley trying as hard as he could to get pushed into the second round, things didn't come together.

Still, tape is tape. Prospects are tough to judge when they have an off year because of an injury- but Tevin and I are going to give it a shot here anyway.

Speed: Don't let his subpar combine results fool you. Woods was an all-state track star in high school, earning the fastest marks in the entire state for both the 200m and the 400m. His ankle injury robbed him of that speed last year, but he's got the wheels to play in the NFL. He's not a burner, but I would wager a guess that he can run comfortably within the mid to upper 4.4's when healthy. 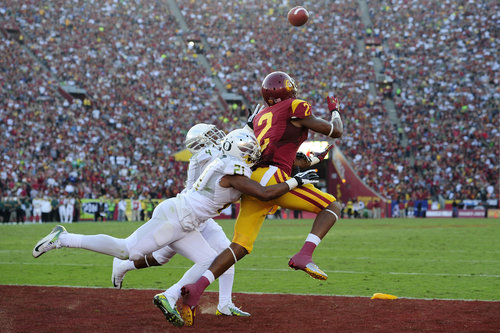 The USC Wideout has been productive over his college career:

Hands: This is perhaps Woods' greatest strength. He has incredible, soft, hands. If you throw it to him, he's probably going to catch it. It's just a fact. He's lean, but he has showed the ability to come down with contested passes.

Route-Running: Woods is a polished route runner and used that to an advantage while playing at USC. He's able to run just about every route you throw at him and given his hands and speed, he could come in and make an immediate impact on a team.

Body Control: Woods is fluid in his motions and adjusts well to passes thrown to him. He has excellent hand/eye coordination and can easily track balls thrown to him. He displays good vision as well, part of why he's able to make some moves to pick up yardage after the catch.

Injury History: Woods has had quite a few injuries over his time at USC. His ankles have given him a lot of grief (so much so that he had surgery on his right ankle last year). He also had concussion symptoms in last year. He will have to check out and test well in his pro day to help alleviate health concerns.

Size: Woods is pretty lean, but has added size before Indy (USC lists him as 6-1/190, the combine has him listed at 6-0/201). He'll need that added bulk to break press coverage against the powerful corners of the NFC West, something he may have trouble with. He also has a knack for pushing off down field, but offensive pass interference is mostly an appeasement penalty in the NFL anyway.

Elite Athleticism: He's quick, has good size and speed, but isn't dominant in any of those categories. There are faster, quicker and bigger options than him in the draft, but Woods gets by on his technique and hands.

Blocking: Woods is a willing blocker, but does not have the size or technique to do it well. This will be something the coaches will have to teach him in the NFL.

"Woods can come in immediately and start producing"

Woods is a very polished player. He's quick and uses that athleticism to make people miss. He can go up and snag the ball with excellent hands, and is fast enough to score a touchdown after the catch. He's a very intelligent football player who is very NFL ready.

That doesn't mean he is devoid of all flaws however; he's lean, and because of that he may have trouble blocking or beating press coverage. He can get lazy at times catching the ball with his body, but on average his hands are superb. He has had multiple injury problems with his ankle and must demonstrate that he is healthy or his stock will drop.

Woods is at this point a day two option who can come in immediately and start producing due to his intelligence, hands and route-running technique.

"I think you can plug him in yesterday, yes yesterday, and he will gain more than 600 yards"

I don't see him having any big negatives in his game- does he drop passes, yeah, but so did many of the other receivers in this class. Honestly, I think you can plug him in yesterday, yes yesterday, and he will gain more than 600 yards. Just imagine moving GIvens and Woods around to get mismatches.

He will surprise people in the NFL next season and hopefully it's with the Rams.