Why the Rams shouldn't draft Eddie Lacy in the first round

The St. Louis Rams are searching for a new running back. But should they draft one in the first round? Find out why I think it's a bad idea.

Share All sharing options for: Why the Rams shouldn't draft Eddie Lacy in the first round

It makes perfect sense that the Rams will add another running back to the roster this season. So much sense that it's not surprising mock drafts, and draft pundits, have linked the St. Louis Rams and former Alabama running back Eddie Lacy; especially now that the Rams and their former star back Steven Jackson parted ways during the off-season.

But something has been bothering me about the Rams drafting Lacy in the first round. He's a running back! Couldn't the Rams do more with their first round picks? This isn't a dig at Lacy, but how important are power backs now? And let's not forget the fact that the Rams drafted Isaiah Pead and Daryl Richardson last season. In fact, I might understand this potential move if Pead wasn't drafted in the 2nd round last year. 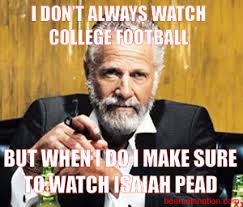 Honestly, drafting Isaiah Pead that high - and then drafting Lacy in the first - is basically like throwing up your hands and admitting you made a mistake. I'm not saying that Eddie Lacy won't be a good player. I honestly think Lacy could be a good starting back in the NFL. He's a thrasher, so no matter what team drafts him, he should fit right in and end up a feature back. But that leaves the Rams with Pead? Do you spend a 2nd round pick on a player who will only be a change of pace guy, and who isn't great at returning kicks? I don't think so.

Granted I could be wrong and Lacy and Pead could end up the NFL's next "Smash and Dash" or maybe even Turner and Hooch? However let's look at another scenario.

How high do you draft a running back?

If the Rams draft Lacy in the first round, that's two backs drafted in the first two rounds in the last two seasons. Jeff Fisher might value running backs highly, but that high? With the value of running backs being driven downward, couldn't the Rams find a solid power back - to go along with Pead and Richardson - in the mid-rounds of the draft, or maybe add a veteran free agent running back.

I'm not against the idea of adding Lacy on the team, but drafting him in the second round would make more sense. Wouldn't drafting positions like safety, wide receiver, offensive line, and even outside linebacker, give you more value than a running back?