A closer look at Sam Bradford in the red zone

Why do the Rams and their quarterback struggle inside the red zone?

Share All sharing options for: A closer look at Sam Bradford in the red zone

He wasn't the worst red zone quarterback in 2012, but for his career ... When looking at his successes and failures when the Rams cross their opponents' 20 yard line, it's not a pretty picture. So, just how bad is it when the 2010 Offensive Rookie of the Year throws the ball in the Red Zone? Let's go to the numbers, courtesy of that wonderful site for all football things statistical, Pro Football Reference.

Let's start with a look at the numbers from Bradford's first three years in the league: 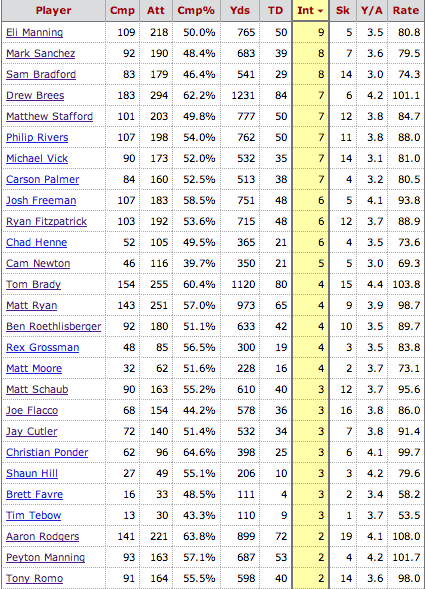 Pretty ugly, right? Of the 25 qualifying QBs (minimum 90 drop backs), he's second to last in INT rate, just ahead of Chad Henne. He has the worst TD rate, by far. It's a blowout, really. He has thrown a TD on 16.2% of his
career Red Zone passes. Next worst is Cam Newton at 18.1%. Of course Newton has 21 Red Zone rushing touchdowns and Bradford has 2. To round out the rest of the awful Red Zone numbers, from 2010-2012 Bradford beats out only Henne and Newton in QB rating. His completion percentage is 46.4%, beating out Newton, Kyle Orton, and $120 million man Joe Flacco.

Now before getting worked up over Flacco, even before his Super Bowl run he rarely threw interceptions, and tossed lots of TDs. But maybe we can make an argument that Bradford will turn things around as the talent gets better around him. To that end, let's now look at the 2012 season, Bradford's best season in his brief, 3 year career. How much did he improve? 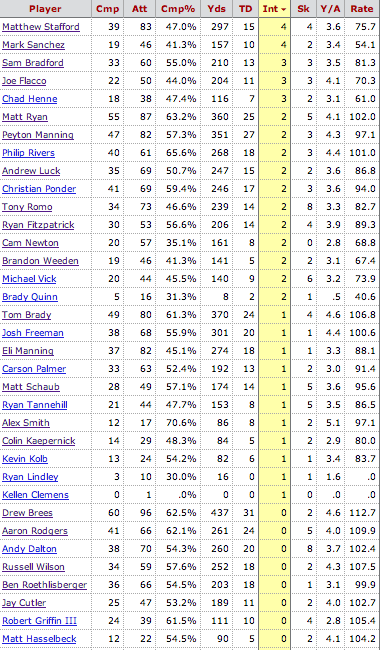 Among the 31 qualifying QBs (minimum 30 dropbacks), Bradford is 22nd in QB rating, 26 in INT rate, 12th in completion percentage, and 20th in TD rate. His INT rate is actually worse than his career rate, but everything else is better. The numbers aren't very good, but Bradford is trending ever so slightly upward. From Chad Henne awful to across the board better than Joe Flacco.

Of course, these sample sizes are pretty small, but don't get your hopes up. If the field position is adjusted out to include all pass plays from inside the opponent's 30. First, the career numbers: 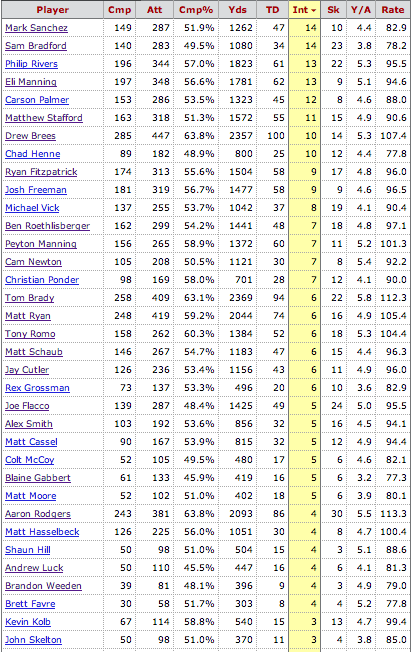 You're a better man than me if this didn't make you open a drink. Here are his numbers inside the 30 from 2012: 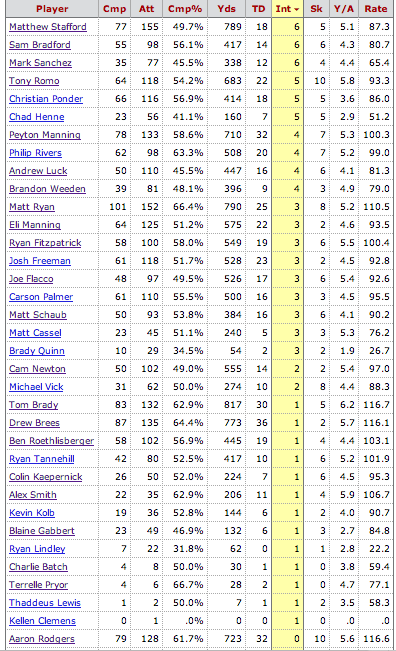 Not good company to keep.

So what is the problem? Why is Sam Bradford performing so poorly in the Red Zone? There are the usual points that we always make with him. He had a terrible head coach his first two years in the league. Pat Shurmur and Josh McDaniels will never be confused with Bill Walsh. Brian Schottenheimer fans probably complain he's had to coach Mark Sanchez and Bradford, but lil' Schotty has got his critics too.

It's all somewhere on the excuses to legitimate reasons continuum. But I think there is more to it than that. What happens in the Red Zone is that the field compresses. It's harder to gain yards because the defense doesn't have to defend as much vertical field. So windows into which a QB can fit his throws become smaller. He must read the defense quickly and not hesitate to get the ball out to the open receiver.

Greg Cosell of NFL Films has often talked of quarterbacks who "see it, throw it". It's something Will from RamsHerd and I have often discussed regarding Bradford. Cosell himself has said the same on the Shutdown Corner Podcast and on the Bernie Miklasz Show. Cosell recently covered the concept when discussing Geno Smith, potential first round draft pick out of West Virginia:

"One final point with Smith, and this is the one that most troubles me. Quite honestly, I do not know if this can be rectified or not. Some I have talked to say yes, others no. It's what I call "slow eyes." Smith consistently took an extra beat to pull the trigger on well defined throws that were there. It was particularly noticeable, but not limited to, play action, which provides more clarity and definition for the quarterback since it's almost always an either-or read. If it's an anticipation issue, that's something that must be looked at very closely. I thought back to Matt Ryan when he came out of Boston College in 2008. He threw with outstanding anticipation; he had an intuitive feel for delivering the ball before receivers came out of their breaks. That was one reason I felt very good about his transition to the NFL. Smith did not show that attribute on film. It must be evaluated carefully. It's not something that can be overlooked."

In the ever shifting thesaurus of punditry, "see it throw it" is now "slow eyes". My sense is that Bradford still does not trust what he sees, and waits to throw to receivers until they are open. He can get away with this outside the Red Zone, but not inside. It's why his overall career INT rate is 2.3%, but jumps to 4.4% in the Red Zone. It's tough to know where "can't read a defense" ends and "slow eyes" begins, but I do think he can adequately diagnose coverages. It's not that he throws to the wrong receiver, it's that the ball is late.

The career numbers are horrifying, and 2012 was hardly peachy, but let's note a few things. The Rams played the toughest slate of defenses in the league last year, and that's with a wide receiving corps and offensive line they were all too happy to turn over.

There's also the Brian Quick factor. That inside the 30 chart for 2012, where there are 6 INTs? On the season, there were actually 7 for the team. Kellen Clemens threw one in mop up duty against New England. Of those 7 INTs, 3 were targeting Quick. He was officially targeted 10 times in the Red Zone. It's really an astonishing feat. The man is the Intercontinental Cross-Quarterback Trans-Atlantic Facilitator of Interceptions.

In 2013, perhaps when Bradford forces the ball to a playmaker in 2013, that player will make plays. And perhaps will stay healthy, and will stop allowing free rushers, and will open holes for an explosive running back. And perhaps Bradford can trust what he sees and hit those tight windows. Or perhaps there will be a new quarterback in 2014.