The ESPN draft analyst is thinking outside the box when it comes to the Rams' two first-round picks. It might not be such an outlandish idea.

There's no way the St. Louis Rams would draft a defensive lineman in the first round of the 2013 NFL Draft. No way.

Todd McShay rolled out his latest mock draft on Thursday at ESPN. In that one he imagines a scenario where the Rams do in fact select a defensive linemen with the No. 22 pick. Let's start with McShay's pick for the Rams before we jump into the arguments for or against.

Patterson may well be the biggest risk/reward prospect in this class. If he pans out, the Rams get a player who can become one of the most dynamic weapons in the NFL. However, Patterson played just one year at the highest level of college football, and his learning curve will be steep. He has mind-blowing ability in space, but he's still learning how to get open and read coverages. There has to be a plan in place to create touches for Patterson other than at wide receiver. Still, the Rams have been searching for a downfield weapon who can open things up for QB Sam Bradford and the rest of the offense, and if Patterson works out they would finally have that piece of the puzzle.

There's a debate emerging over Patterson versus Tavon Austin. Both have some very similar YAC ability. Patterson has Austin beat in the size department, but the West Virginia receiver tops the former Vol in experience. In this draft, Austin goes ahead of Patterson. In the real world, it might be worth asking which one would be a better fit for the Rams.

St. Louis got an offensive playmaker earlier, and Williams would round things out nicely for the Rams in the first round. Defensive tackle isn't a pressing need, but they are in a position to draft for value, and if the St. Louis defense is going to take the next step it needs depth along the interior. Chris Long, Robert Quinn, Michael Brockers and Kendall Langford are already in place, and Williams would deepen the rotation so the Rams could come after offenses relentlessly for four quarters. He shed some weight and got quicker last season, and at worst the Rams would get a guy with power who flashes explosive playmaking ability and the potential to be a solid disrupter for a long time.

No way, right? Not so fast.

The Rams sent a big contingent of coaches to the UNC pro day to see Williams and guard Jonathan Cooper. That's not a big surprise, considering the coaches and scouts have hit a long list of pro days with all kinds of players.

Let's go back to something GM Les Snead said during his media session at the Combine.

"You can probably never have enough defensive tackles because if you're gonna chase a QB around all day, the 300-plus pounders tend to get tired," he said. "So it wouldn't be inconceivable.

"But when you have a rotation defensive line like we do, and you can win with the front seven, hey, if you can bring in your next guy - who's fresh - who's just as good as the guy who just left. Yes."

The Rams have a lot invested already in the defensive line, with three first-round picks and a free agent, Kendall Langford, in the middle. It doesn't seem like the smartest draft pick to make, taking another tackle. Then again, this is one of those positions, as Snead suggests, where depth is of the essence, and not just to be prepared in case of injury.

(Side note: Jim Thomas mentioned the possibility in his chat at the Post-Dispatch this week too).

Could the Rams draft Lacy? 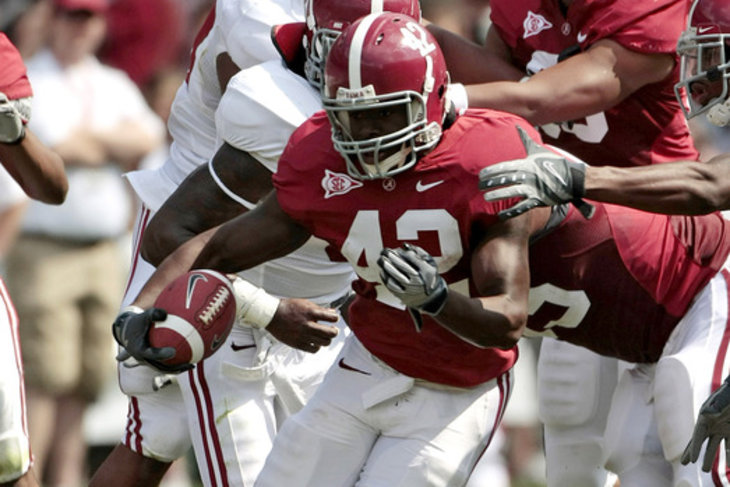 Speaking of picks that fire up debate, the Rams apparently like Alabama running back Eddie Lacy. Could he be one of the team's first-round picks?

It's thin behind Langford and Michael Brockers on the depth chart. Jermelle Cudjo was a sturdy run stopper in the middle working in relief of Brockers last year. After that you have UDFA Matt Conrath, who saw a total of five snaps last season. William Hayes does rotate inside on third downs or other obvious passing situations, so it's not the Rams are totally devoid of options for the interior.

When you think about it, I don't recall a team ever being hamstrung on the field because of their defensive line depth.

With one all-encompassing subheader, we've got a case for and against drafting a defensive lineman. Why use a premium pick on someone whose snaps will be limited? There's the possibility that the rookie DT could leapfrog Kendall Langford in the starting role. Then again, there's a distinct possibility he wouldn't. It's a big unknown.

Playing first-round picks in a part-time role is not unheard of; however, names like Aldon Smith and Bruce Irvin are a little different because of the positions they play. They're pass rushers on teams with already deep lineups. The Rams aren't quite there when it comes to overall lineup depth. Drafting a part time player means passing on the chance to draft a guy who could fill one of the starting position needs right away.

Then again, the Rams are facing some cap trouble in the near future. There are 10 players tying up close to $70 million in cap room next year. Defensive tackle Kendall Langford will have two years left on his deal for a total of $11 million ($5 million in 2014 and $6 million in 2015) after this season. Robert Quinn has a club option for the 2015 season, though it would be within his purview to demand an extension at that time. The team has a ton of money tied up in Chris Long, a deal that Quinn and his agent have probably noticed. Having a pair of first-round caliber defensive tackles under team control at bargain basement prices could free up future moves elsewhere.

Sure, why not. I listened to Snead talk about the draft at that Combine presser. He talked about guards, receivers and running backs, and he did a great job of walking a fine line, endorsing nothing but not writing anything off either. It's what GMs do. They also don't get their draft advice from the internet (though it couldn't be too much worse than previous Rams regimes).

Is this defensive line talk a smoke screen? Maybe. To me, it sounded more like a standard talking point, the kind that doesn't rule anything out, than it did an intentional smoke screen in the variety of what the Chiefs are doing with Geno Smith.

Are the Rams going to take a defensive tackle in the first round? I probably wouldn't lay down good money on it. Then again, I'll be the first to tell you that I have no idea what their draft board looks like (the nerve of the Rams not telling us, huh?). I'm pretty doubtful that anyone in the comments or Twitter can tell you with any authority what the Rams are going to do either.

Trading down to match player/need/draft slot would be the ideal thing to do here. That assumes they can find a willing partner to swap with, which isn't always a possibility.

If things shake out like that in the first round, especially with that No. 22 pick, should the Rams stay true to their draft board or go down a bit and grab a position of need?

Dealing in hypotheticals is all very easy when you're winding your way through a pretend draft on the internet. It's different when you're playing with real money and jobs are on the line.

I'm glad al I have to do is write about it.

• Is the NFL ready to accept a gay player?

• Could Carson Palmer land in Arizona?

• NFL Mock Draft: SB Nation bloggers are on the clock