The Rams are taking a busload of coaches and general managers to see the Louisiana Tech receiver. What kind of player are they going to see?

Share All sharing options for: 2013 NFL Draft: Who is Quinton Patton?

The St. Louis Rams are not done adding help to the team's group of young wide receivers, the next wave of reinforcements is likely to come via the 2013 NFL Draft. One of the players the team is reportedly interested in is Louisiana Tech wide receiver Quinton Patton.

I don't think he slips out of the top 64.-Dan Kadar, SB Nation

The team is interested enough to take a bus filled with coaches and decision makers to a private workout with Patton. The last time they did that for a receiver was this time last year, dragging Kellen Clemens to throw passes to a kid from Appalachian State named Brian Quick. It's probably worth knowing more about who Patton is.

I talked to Dan Kadar, the editor at SB Nation's Mocking the Draft, after hearing the news. Here is some of what Kadar told me.

"Patton has solid size, very good speed," Kadar said. "I'm not as high on his hands as other people. I think he lets the ball into his body too much. He's a good route runner, though. He's sudden in his moves.

Patton at the Senior Bowl 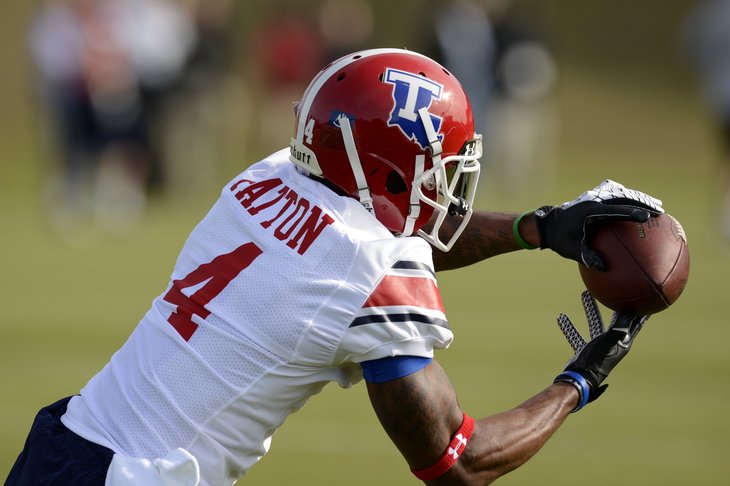 The Rams found a guy they liked in last year's Senior Bowl, grabbing Isaiah Pead in the second round. Could Quinton Patton be the next standout from the all-star game the Rams select?

Read his words again. Highlight the part about Patton being a "good route runner" and "sudden in his moves." Now who does that remind you of? I'll give you hint because there's something here that probably prevents you from making an easy comparison, a la NFL.com ... he was Sam Bradford's best pal, and now he'll be tight with Tom Brady.

Yeah, remember all that great stuff Danny Amendola used to do in the middle part of the field, the balls thrown from Sam into the short and intermediate parts in front of the line of scrimmage? Those kinds of skills would be very useful for the Rams to have in Amendola's absence.

Even better, his ability on those routes and his body control give him the ability to create space between himself and a defender. Linebackers are too slow to get him; cornerbacks have to give him a zone. Think about a player like that on play action passes, a staple of the Bradford era playbook, all three of them.

Last October, Alen Dumonjic of Rotoworld put together this exhaustive breakdown of Patton's ability. Take a look at what he says about Patton on a slant route, an Amendola staple, against Mississippi State:

At the snap, he got off of the line of scrimmage and attacked the cornerback with a vertical stem that saw his shoulders parallel to the goal-line, giving the cornerback no chance of knowing what route Patton was going to be running ... His quick movement created separation from the defensive back in a tight situation and he was rewarded with a touchdown.

I know what you're thinking because I'm thinking it too: another small school, rookie receiver means waiting for him to get caught up. Maybe. Louisiana Tech isn't as smallish as Sun Belt bound Appalachian State, but it's not Alabama either. However, Patton carries a different skill set than Brian Quick, and more importantly, is already an adept route runner, which should ease his transition into the Rams playbook.

The biggest question I have now is where in the draft the Rams would get Patton. The No. 22 pick is a little soon, and the middle of the second round is probably a little late. We'll see what happens.