Jake Long makes it official with the Rams

The St. Louis Rams officially have their new left tackle.

Share All sharing options for: Jake Long makes it official with the Rams

It is now official. Jake Long signed on the dotted line, and is now legally contracted to be part of the St. Louis Rams for the next four years. The Rams shared this photo today via their instagram feed. 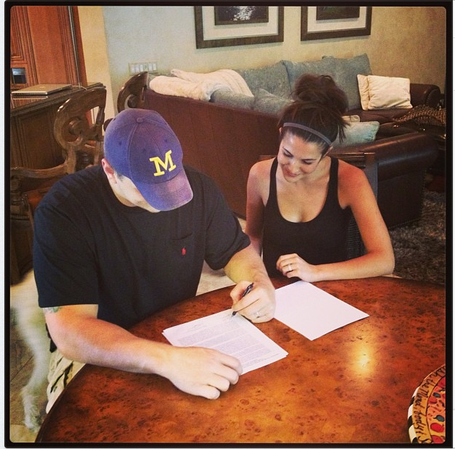 Hopefully the fax machines were working. Of course, it wasn't subject to the same sort of deadline that made Elvis Dumervil a free agent.

Long's deal is worth $34 million with $15.5 guaranteed. Another $2 million is available in incentives. That was reportedly a little more than Miami was offering him, approximately $1 million per year more. Of course, he was also sold on playing for Jeff Fisher, organizational vision, etc. Talking point? Sure, but after playing with the Dolphins, I'm sure Long does have some appreciation for a team committed to doing things right.

The Rams do not take a big cap hit on Long's deal this year, a mere $4.5 million. That leaves the Rams with an estimated $3 million in cap space at the moment, but a few creative contract moves could always free up more room should the Rams choose to get active again in free agency.