With one stroke of the pen, the St. Louis Rams have changed the look and feel of the team, for the better.

With a bargain deal and a lot of sweet talking from head coach Jeff Fisher the St. Louis Rams finally convinced Jake Long to be the team's new left tackle. The move fills a huge void, one that the team has been trying to address since Orlando Pace left town. Long gives them that left tackle for the next four years. It's more than just a free agent move to address a need; it's a deal that has some big implications for the team going forward.

Sam Bradford - The Rams sure are committed to the four-year quarterback, finally giving him some assurance that his flanks, both of them, will be protected for the first time in his career. Through days of courtship and negotiations, the Rams pursued the former first overall pick of the 2008 draft, not any other tackle.

Since before the end of last season, Fisher and Snead have talked openly about the limitations on their quarterback, namely a lack of consistent protection. With that, a second year in the same offense and better receiving options, the Rams expect their quarterback to reassert his place as the best in the NFC West. The team wanted to get the best tackle on the market, because this is now Sam Bradford's team.

Rodger Saffold - Sure, his agent walked back the trade talk. He probably is unhappy about the move to the right side, but there's nothing he can really do about it until 2014, when he becomes a free agent. Winning cures all. Perhaps playing on a better team, right side or not, Saffold can be placated for a year. I suspect he'll still want to see about the free agent market, but we'll see what happens.

Tackle depth - Long's injury history got plenty of attention during his visit to St. Louis. The Rams medical staff signed off on him, and Dr. James Andrews did before that. If he does have to miss some time this season, the Rams have a backup left tackle on the right side that they can move over, Saffold. Yes, they'll need to find another reliable tackle - or is that man Joe Barksdale? - to plug in there should that happen. Nevertheless, the right draft pick or some development on the roster and the Rams suddenly have the kind of depth they've never had at tackle.

The new offensive line - Once again, the Rams have invested in their offensive line. They have Long on the left side. Next to him, the situation is still fluid as they look for a left guard. Could that be Rok Watkins? Fisher and Snead speak highly of him and he did make a brief appearance there before a season-ending injury. In the middle is Scott Wells, last season's free agent addition to the line. He should be healthy to start training camp. At right guard is Harvey Dahl, last season's best lineman, but he's coming off a torn biceps injury. He too should be ready for camp. Saffold has the right side. 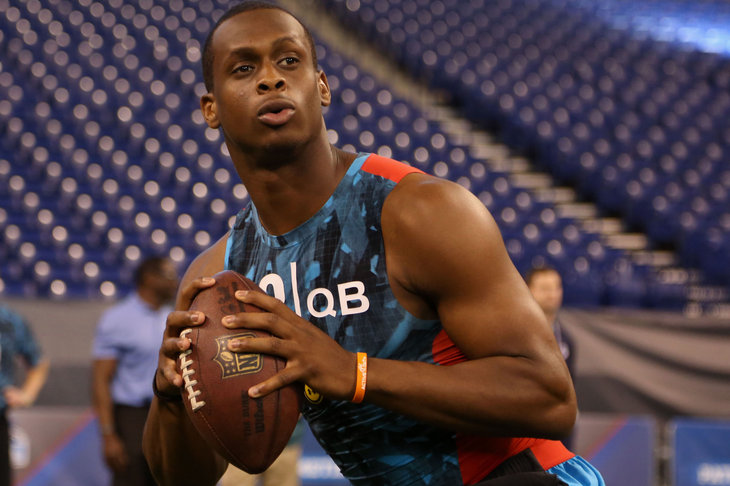 The draft is getting closer, and free agency is giving us some idea about which way teams will go. The Rams made a couple of key free agent moves to shore up critical needs. Now what do they do with those two first-round picks?

We've been here before. Remember, not so long ago the Rams had pricey free agents Jacob Bell and Jason Brown in the middle of the line to go with the well-compensated Jason Smith, with a gigantic rookie deal for being the second pick.

This is a different group. Dahl and Wells have proven their effectiveness for the Rams already. Now they just have to prove their health. Long is the new addition, but his career track speaks for itself. He too needs to be healthy. The biggest concern here is depth, given the injury history of the group.

Draft options - Can the Rams, will the Rams, still consider a tackle in the first round? Depending on who falls to them, it's not a bad idea. Remember, they need to groom replacements for all of these players, especially Saffold since he could leave after the season. They have a private workout scheduled with D.J. Fluker. There will likely be options in the later rounds too.

If Chance Warmack or Jonathan Cooper are available with either of their first-round picks, that would give the Rams an elite front five. They can also take their chances with a pick on the second day or even the third, using the two first night picks to get a safety or a receiver, etc.

Signing Long and Jared Cook gives the Rams flexibility in the first round.

The Rams haven't been as busy as some teams in free agency, opting for a considered, targeted approach. It's been frustrating, if you view the offseason as a race. Fortunately, it's not.