The St. Louis Rams: What's On Your Shopping List For The 2013 NFL Draft?

Jeff Fisher, the Rams' head coach, has a plan... What the plan is for the team in his second year is a closely guarded secret. It's like the launch codes for missiles, or the sequence of things I have to do to start my Yugo...

Share All sharing options for: The St. Louis Rams: What's On Your Shopping List For The 2013 NFL Draft?

While the Rams have been relatively quiet in free agency this year, I've been watching all the signing for other NFC West teams. Call me paranoid... Wait... Why are you calling me paranoid? You've been talking about me, haven't you? Was that you in the bushes outside my house in a cat outfit? I knew it! Umm, er... What was I saying? Oh yes, I was about to voice some concerns I have over what appears to be the entire NFC West signing free agents to stop Steven Jackson and the Rams running game. Yes, Steven is in Atlanta now, but it seems like every division foe has been repairing their run defenses. Since the Rams were really the only team to run well against Seattle, San Francisco, and Arizona, and they were partially responsible for teams I won't mention having lower playoff seedings, they'd be wise to do so, right?

Look, I'm not sure if the Rams will challenge the 49ers and Seahawks for first place in the division in 2013. While I have little doubt St. Louis will play every division team tough, I do get the feeling that the Rams may be the team to beat in the NFC West. Confusing? Let me explain. If you look back at last season, the Rams became a spoiler of sorts. They beat Arizona for their first loss of last year during their fast four win start. After the week #5 loss, they went in the tank for the rest of the season. San Francisco lost to the Rams twice (I count the tie as a win, so sue me, I mean, DC) in what they thought was the easy part of their schedule. Instead of being 13-3, they wound up with a 11-4-1 record. Sure they went to the Super Bowl, like that's a big thing... The point is the Rams pretty much owned the 49ers in 2013. Seattle, while they split wins and losses when they faced each other, the Rams' defense beat them up so bad they barely won against a banged up Washington Redskins team in the first round of the playoff.

I bring this up because the players Seattle seems to be signing look remarkably like those an NFC West coach would want after re-watching game film of playing the Rams last year. My unassailable logic kicks in here, making me think the Rams might want to counter their counter moves. For instance, the Seahawks nabbed Cliff Avril with a two year deal. It may be just me, but finding a right offensive tackle just went way up on my wish list for the Rams. Have a look:

So far, the Rams have countered with: 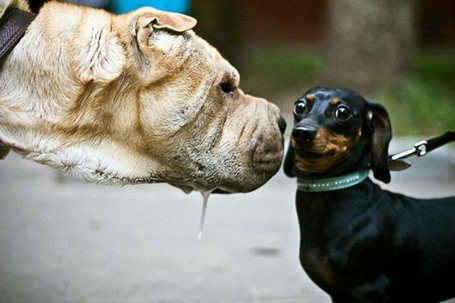 Life has taught me we don't want to be the little bug-eyed dog of the NFC West. Trust me on this one. We also went from having one of the best running backs in the NFL, to two no name guys, and one them is named - I. Pead... Really, don't Rams fans get teased enough! Has anyone thought about the fact the Rams now have the lowest ranked running backs - statistically - in the NFC West? It's been like a gazillion years since that's been the case. Therefore, on top of needing a right offensive tackle, the Rams need to draft or sign a running back that will limit the teasing. Arizona has Rashard Mendenhall. Seattle has Marshawn Lynch, and San Francisco has Frank Gore. Just sign Ahmad Bradshaw. It's a respect thing, and you don't even have to play him. He can just stand on the sidelines and look threateningly across the field as he yells "Go Pead! He's going, he going..."

Next, I think the Rams need to spend their precious first round draft picks on at least one top flight wide receiver. I'm thinking Cordarrelle Patterson. The man has a 37 inch vertical jump to go with his 6'2", 218 lbs frame, and he even - kind of - looks like Julio Jones. When the Rams play Atlanta, we can switch the two players and the Falcons will never know!

So let's see what I have on the Draft wish list so far: A right offensive tackle, wide receiver, running back, and we better throw in a guy like Chance Warmack to play left guard. Barrett Jones might be a good pick too, since he appears to be able to play every position on the offensive line. I also want a outside linebacker, so Dion Jordan goes on my list. Eddie Lacy would be the running back I'd pick, at least until I change my mind. After watching the Gif of Cliff Avril, I'm thinking Lane Johnson is the guy I want at right tackle. His footwork is what we'll need to counter the pass rush from the right side. If Rodger Saffold gets hurt - and he will - he can slide over to the left side.

Now some of you will say there's no way the Rams can land all of these players. "Doug, you idiot, most of the guys you want will be long gone by the time the Rams pick at #16, let alone #22!" Well all I have to say is calling me an idiot wasn't nice at all. Plus, I took a test when I was in the 3rd grade. When my parents asked my teacher, "So, is he an idiot?", my teacher didn't say yes. She rolled her eyes, pointed at the test in her hand and said, "He doesn't even qualify for "idiot"." If that's not an intellectual endorsement, I don't know what is... No really, I DON'T know what is?

So have a great weekend, and I'll leave you with a little picture I found. The guys in the picture are either Rams fans, or Jeff Fisher, Les Snead and Kevin Demoff. I just know it... 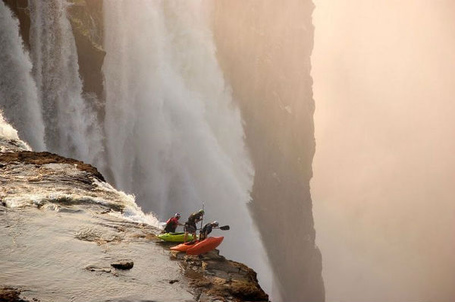