The St. Louis Rams have not, despite a prior report, signed Jake Long to a contract.

Share All sharing options for: Rams still meeting with Jake Long, no deal

The St. Louis Rams have not reached an agreement with Jake Long. In fact, they aren't even that far into the process. Jim Thomas of the Post-Dispatch reported this minutes after Omar Kelly of the Sun Sentinel reported that the Rams and Long had agreed to a deal.

According to Rams, Rams have NOT agreed to terms with Jake Long. In fact, they haven't even discussed "terms." Long still taking physical.

After Long physical, they will discuss situation. Obviously, he could end up w/Rams at end of day.

That was also confirmed by Ian Rapoport of the NFL Network and others.

So hold off on those Jake Long jerseys and hand-wringing over whispers of Rodger Saffold demanding a trade. The Rams and Jake Long have not agreed to anything, well, anything other than him undergoing a physical.

There's a good lesson here about trusting sources on Twitter. Omar Kelly, despite his verified Twitter account and veteran status with the Sun Sentinel, is typically someone you can count on for information. So what happened?

Kelly was one who reported that a deal between the Rams and Long was likely depending on the outcome of the physical, and that's a report that has some legs to it. Others hinted at it. Then an outfit similar to the infamous Incarcerated Bob calling itself @PFCentral reported that a deal was done.

It looks like Kelly may have run on that report. 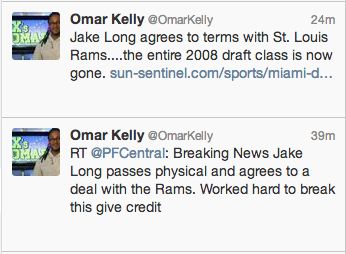 PFCentral has 24K followers on Twitter, but 80 precent are fake. Yes, you have to verify that now too.

Kelly's blog post that the Rams had signed Long is gone now. So is ours.

We try to tread lightly on these things, attaching the caveat "according to report" to everything that comes out that hasn't been verified by the Rams one way or another. Mistakes happen. Kelly cited a bogus report because it lined up with what he had previously heard. When a veteran, verified reporter from a major newspaper reports news, it filters up.

Our initial post wasn't technically wrong. We included that caveat that it was according to a report.

I'm not going to change the approach to how we do things here at TST. We'll still write about what gets reported, but I will be big enough to admit when we should have slowed to publish something. Omar Kelly, as you can see, is not going to admit to his mistake.