Life in the offseason can be difficult for NFL players who haven’t signed multi-million dollar contracts. For some - like St. Louis Rams running back Terrance Ganaway - it forces them to find ways add to their relatively meager NFL paychecks. Part-time Quarterbacks need part-time jobs! 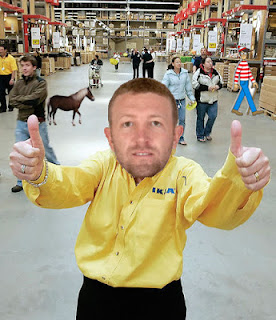 Rams' backup Quarterback Kellen Clemens has also found his customer service calling… at IKEA! Though slightly higher than the aforementioned running back, Clemens made $700,000 in 2012. Well, that is, before his -$170,000 misc. bonus, which dropped his annual salary to $530,000.

He works to hard to be ballin’ on a budget, though, and therefore he works a part-time gig at the IKEA near his home in Portland, Oregon.

Kellen initially filled out the application with aspirations of working on the top floor, where all of the excitement happens. He was brought on board as a sales associate in the Living Room Furniture section. It wasn’t long after he was found sleeping on a giant bean bag chair that he’d be relocated, and find his true calling with the organization: bench making.

I traveled to the location to get the inside scoop. "I simply asked him to assemble a bench for one of our endcap displays here in the warehouse," said Rolph Lundgren, Shift Supervisor at the location. "Not only did he build the display, but he took the time to add padding to the seat, and neatly upholster fabric to cover it." As Rolph and I stood by watching Kellen continue to display his bench-making skills, several customers admired the finely crafted piece of pre-fabricated furniture.
I know a thing or two about sitting on benches

Mr. Lundgren - though very nice - doesn’t allow hindrances to productivity in the warehouse, so I was not immediately granted access to speak to Kellen. It was on his 15-minute break - where we shared a slice of pizza and a chili dog - that he explained the job choice. "I chose IKEA for a few reasons. The 10% employee discount is great, but I also like working with my hands…I don’t get to do that much during the regular season," he added. "Also, did you sit on that bench? It was not comfortable. Trust me, I know a thing or two about sitting on benches."