Now that the Chiefs have Alex Smith, could a trade for their top spot be in the cards?

It's the moment you all have been waiting for; my first mock draft of the year. Mock drafts are becoming more inaccurate with the new rookie wage scale. Team are more willing to trade up because the fear of paying an unproven player top dollar is gone. Rookies are cheap, so now teams area willing to take a bigger risk in the draft. This year in particular, the top of the draft is a hot mess as no prospects have clearly distinguished themselves as worthy of a top five pick. Let's just get to it.

The Chiefs are getting Alex Smith, and if they bring back Branden Albert, they have no need on the offensive line. They may be looking to trade down. The Browns did select a QB in the first round last season, but that QB is now 29 and Weeden does not have the ceiling to be a top QB. Geno Smith does, though he comes with some risk. I have the Browns giving up their first and third round picks this year, along with a 2nd and 4th round pick in 2014.

* Originally I had the Brown trading a 1st 2nd and 4th this year, but one of my followers pointed out that they gave up their 2nd rounder to draft Josh Gordon in the supplemental draft. I am stupid. I am sorry. 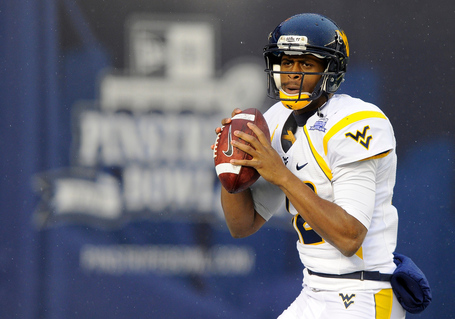 Dan Kadar from Mocking the Draft filed his post-Combine projections for the first round of the 2013 NFL Draft.

The Jags need to upgrade their entire team. Their pass rush is very weak, and Sharrif Floyd has the potential to be an Ndamukong Suh type pass rusher from the 3 tech or even 1 tech position. I have Star Lotuelelei rated higher, but his recently discovered hearth condition will drop him in the draft until more information is available about it.

Ansah has a rare blend of both super athleticism and size (6' 5", 270lbs). He even could add more weight to his frame and maintain his explosiveness. The Raiders would like Geno Smith, but I can't see him falling past Jacksonville.

If Luke Joeckel is available here the Eagles will be sprinting to the table to turn their card in.

The Lions have needed an upgrade in the secondary for ages. Can't go wrong with selecting an extremely talented player who was coached by Nick Saban at Alabama.

Sheldon Richardson is flying up draft boards and is almost certainly going to be a top ten picks. Watch out for the Chiefs. With Andy Reid in place, Alex Smith under center, and a talented roster overall (6 pro bowlers) they could be in for an extremely quick turnaround.

One of the writers I respect the most, Matt Miller, said a scout told him Barkley won't fall past Arizona. I see the Cardinals picking a QB. There is no way their team can compete with Kevin Kolb or John Skelton. Him arm strength does leave a lot to be desired and he had a bad year in 2012, but Barkley is incredibly smart and has good accuracy.

Right now I believe the Bills front office is performing multiple voodoo rituals to attempt to have Geno Smith fall to them. That's unlikely, but they also have a need for a pass rusher. Bjoern Werner compares favorably to Chris Long and would be a tremendous player opposite Mario Williams.

Ever see Rex Ryan do a backflip? You will if he can pick an athlete like Dion Jordan.

Best player available by far at a position of need. He would step in at guard and the Titans wouldn't have to worry about that for 8-10 years. He is easily the safest pick in the draft.

If the Chiefs stay at one and select Luck Joeckel, Fisher would likely be picked by Philly at 4. Arizona could also snatch him up at 7, but QB is a huge need for them. He certainly won't fall past the Chargers.

Patterson is an impressive physical specimen. Great burst off the line. Smooth in and out of cuts. He does need to improve his strength in the NFL and learn to use his large frame to his advantage, but teams love his potential.

He is not of the radar of most NFL fans, but scouts really like him. He dominated at the Senior Bowl and put up very good numbers at the combine. He is good in both man and zone coverage and he can go to Tampa and help their secondary, which was just awful last season.

Without knowledge of how serious his heart condition is that kept him from performing at the combine, it's nearly impossible to predict where he will land in the draft. He is talented enough to be the first overall pick and eventually the value will match up with the health issues and Carolina needs a DT.

He had a disappointing combine, but most front offices put little weight into that. He still looks great on tape. He has played both 3-4 OLB and 4-3 DE and would be a key piece in the Saints transition to a 3-4 defense.

The key to the Rams offense in 2013 is Sam Bradford playing well. The first step for Sam Bradford to play well is to keep him upright. Rodger Saffold has played well at LT, but Johnson is a good enough prospect to move Saffold to RT.

The Steelers are one of the best drafting teams in the NFL and a large part of that comes from their inexplicable ability to always end up with players who fall down the draft board. Jones has that spinal cord issue, but it didn't stop him for putting up crazy numbers in the SEC.

Dallas needs help in the secondary. Vaccaro is too good for them to pass up here, though they may consider drafting offense line again, but that is not Jerry Jones' style.

Ogletree is like a swiss army knife, he can do it all. Tremendous football player. Can rush the passer, play good coverage, run down ball carriers. The Giants defense keeps getting more athletic.

Jay Cutler should quit playing if the Bears don't bring in somebody to protect him.

He is a big, physical corner. He is great in press coverage and has good ball skills. These corner/safety hybrids are becoming valuable in the NFL and the Bengals have little corner depth.

The Rams have limited cap room and they may be forced to pick between resigning Danny Amendola and Steven Jackson. Steven Jackson is a team leader and Danny Amendola, while talented, has injury problems. If the Rams do not resign Danny Amendola they need someone who can win right off the line and be Sam Bradford's blanket in the short passing attack. Tavon Austin is one of the quickest football players I've seen in a few years. He would also provide the Rams a great kick returner.

Allen is a very good route runner with solid hands and he also knows how to use his size to get open. Keenan Allen is exactly what the Vikings are looking for. A bigger WR who can win intermediate routes.

The Colts need pass rush help after releasing Dwight Freeney. Enter Barkevious Mingo and his supreme speed off the line. Chuck Pagano would be a great coach for the somewhat raw Mingo.

The Seahawks have one of the most complete rosters in the NFL. QB? Check. RB? Check. WR, O-line, DE, LB, secondary? All checks. Where they don't have a check is interior pass rush. Short could fill in that box.

As you all know, I am completely against drafting running backs in the first round, but some team is going to pick Lacy in the first, I just know it. The Packers have to be sick and tired of constantly looking for a solution at RB. Lacy is not an explosive player, but he will grind out yards, and pass protect well.

He is not that big. He is not that fast, but Hopkins just knows how to play WR. He doesn't have a lot of potential and projects as a number two WR, but that fine with Houston who is looking for a Robin to Andre Johnson's Batman.

If your are going to pay out the ass for Peyton Manning, give him as many weapons as possible. Eifert separated himself from Zach Ertz at the combine and is the top TE available.

Hankins is a very underrated prospect, largely due to his un-flashy playing style, but make no mistake, Hankins can ball. An interior line of Hankins and Wilfork could be horrifying for AFC opponents.

John Abraham is turing 35 a week after the NFL draft. He can't keep defying his age forever. DE should be a priority for Atlanta in this draft.

Donte Whitner surrendered more TDs than any safety (yes, including Craig Dahl) and Joe Flacco made Dashon Goldson look bad in the Super Bowl. Elam is my second ranked safety and he makes a ton of sense for the 49ers.

Ray Lewis is retiring, which leaves a big hole on the inside of the Ravens defense. Te'O comes with heavy baggage, but he is still a good football player who will show up and work his ass off, and at the end of the day, that's all that matters. Some are concerned with his 4.82 40 time, but James Laurinaitis has done very well in his young career after running a 4.82 at the combine.

More in the NFL:

• The best (and we mean worst) quotes from the Combine

• This is a fake column: Te'o can't outrun past

• Why every city is awful for NFL free agents