Communication is the Rams' key to working with young players in the offseason.

Janoris Jenkins is a topic of conversation again, specifically in relation to "character concerns." Why is Jenkins being talked about again for anything other than his outstanding rookie season? Mostly because NFL writers are lazy and incapable of seeing beyond established narratives. Needless to say, Jenkins is doing just fine in his first full offseason as a member of the St. Louis Rams.

(He is in the rap music business, which is sure to be well-accepted by crusty white guys who cover the NFL. I don't know enough about the genre to comment on the music. I do know that a ripple of indignation went through the local media, but talk radio has time to fill).

The Rams under head coach Jeff Fisher and GM Les Snead have shown a willingness to work with players written off by other teams for so-called character concerns, players like Jenkins. There is no simple formula for dealing with a draft pick's past off-field red flags or a free agent with a rap sheets.

"We've gone out of our way to stay in touch with the younger players." -Jeff Fisher

Fisher and his staff use a simple trick to mentor Jenkins and monitor his time away from Rams Park: communication.

He joked that players had been "threatened" by the veterans in the team meeting room, a gage that did blur the line between threats and helpful suggestions. Veteran players did talk to their younger counterparts, "about making the right decisions, taking care of yourself and being in shape when you come back." 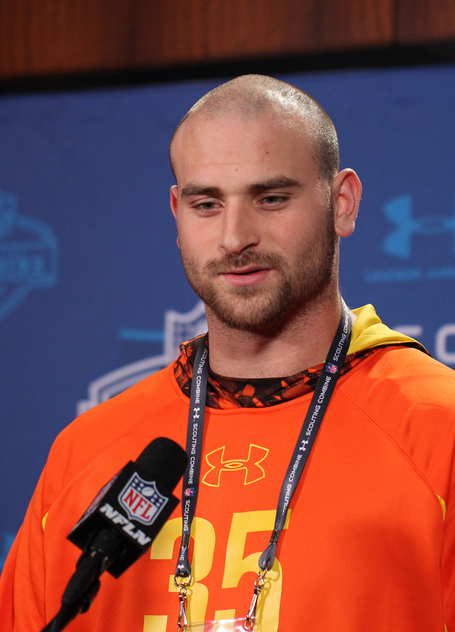 The Oregon tackle and Chris Long's younger brother knows a thing or two about overcoming obstacles. He also can handle his Twitter account, but not as well as his brother.

Being in shape is hardly a concern the Rams have when it comes to Jenkins.

Players are allowed into team facilities during the offseason to lift weights and condition. Talking football with the coaches, however, is off limits.

Teams get less time with players than they did in the past. The 2011 collective bargaining agreement compressed the offseason interaction, strictly limiting the amount of time coaches have with players, even for seemingly low-impact activities like going over film. It also means more time for players to get into trouble, something Fisher acknowledged was a concern.

Fisher sees a workable solution, a middle ground between the dictums of the CBA and the realities of paying millions of dollars to kids in their early twenties, being paid to play football for the first time in their lives.

"I've always hoped that at some point, we could get together with the Players Association and work something out," Fisher said. "We coud have our young players, our first- and second-year players, back in the building somewhere in the middle of the offseason before the program starts, not for football but for life skills.

Hopefully at some point we'll be able to have something. I think it's necessary. This is the time of year when those type of things come up."

More in the NFL:

• The best (and we mean worst) quotes from the Combine

• This is a fake column: Te'o can't outrun past

• Why every city is awful for NFL free agents