A surprise scenario has the Rams adding top talent with their first pick- just not in the area you'd expect.

Share All sharing options for: Mock Me Maybe: Take Two 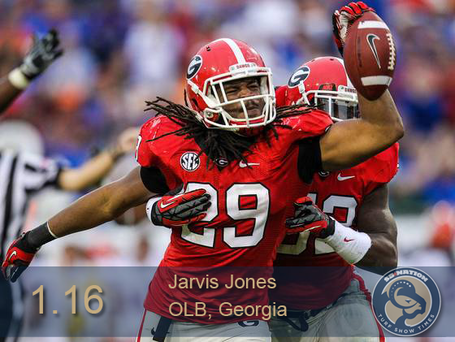 If Jones falls, he's simply too talented to not select.

Let's call it the Robert Quinn scenario. Before the 2011 draft, it seemed like a virtual lock that Robert Quinn would go in the top ten. Most pundits agreed that he was simply too talented to fall that far. Unfortunately, teams were scared of the tumor in his brain. As a result, Quinn fell to the Rams at fourteen, who were absolutely ecstatic that he was available.

Flash forward two years later. Jones had a spinal injury that ultimately sealed his fate at USC (even though specialists cleared him to play, the team did not). He's not known as a workout warrior, so his combine numbers probably won't explode and his spinal injury will probably scare some QB needy teams into drafting a quarterback well before they should.

If Jones falls, he's simply too talented to not select. Does he fit perfectly into a 4-3 defense? Probably not. Could he wreak havoc with the defensive line the Rams have in place? Absolutely. You just can't pass up Jones here, needs be damned. 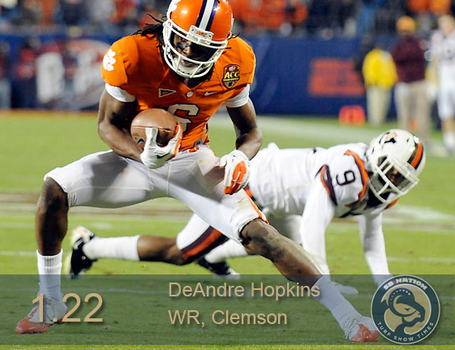 Hopkins gives Sam Bradford and the Rams the playmaker they desperately need.

I've told everyone I'm a fan of Patterson, but he's likely long gone at this point. If he even puts up remotely good combine numbers, some team will jump on him much higher than he should be picked (I think right around this point in the draft is a good value for him).

Enter Hopkins. It's hard to pick a particular receiver in this draft, but Hopkins should be available here. Hopkins is a good fit for the Rams and should be able to take over Brandon Gibson's former spot. I'm pretty dead set on the Rams drafting a pass catcher in the first round (WR or TE, whatever your fancy). Hopkins gives Sam Bradford and the Rams the playmaker they desperately need.

With Hopkins, Quick and Givens, the Rams have enough potential at the position in young players, they just need to extract it. They don't have the money to go for a big name receiver in free agency, so this is about as good as it is going to get. He has some focus issues, but the Rams have to trust that they can iron out any mental problems. 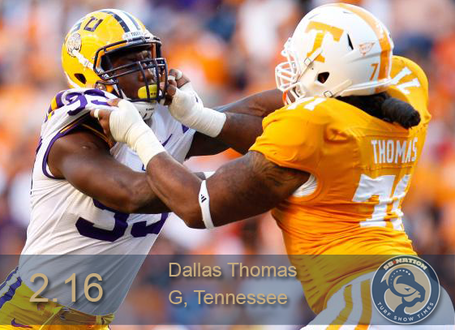 He's accomplished enough to start at left guard early on.

Thomas' stock depends on the position the team drafting him thinks he can play. If you believe he can be a tackle (I doubt many will given his small arms), then he'll probably sneak into the first round. If you think he's a guard, he would probably be available here, but you never know.

Thomas is a good pass protector and he'd fit in well at left guard for the Rams. He's been durable, and his left tackle experience can't be overlooked. The biggest knock against Thomas is that he needs to add weight to improve his push in the ground game, but his measurables and play on the field last year didn't leave a whole lot to be desired.

He's accomplished enough to start at left guard early on, filling a huge need for the Rams. Jeff Fisher keeps his offensive line streak alive while still adding talent at the position. 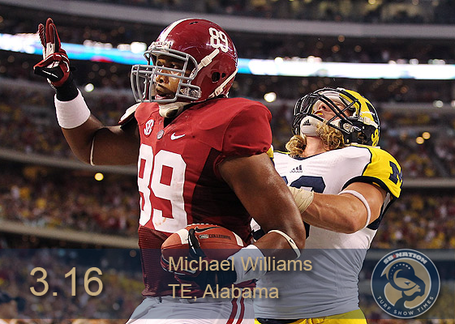 I fully understand that this is a little high for Michael Williams according to most draftniks out there. There are probably more than a few of you scratching your heads right now and I accept that. Williams is the best blocking tight end in the draft, bar none. Selecting him allows the Rams to use Lance Kendricks to his full potential, whatever that is.

Williams is also a viable red-zone threat. He's a viable pass catching tight end, but his number was never called upon much to do so. His stats may make it seem like he's the second coming of stonehands McMichael, but that isn't the case. His blocking ability is too tempting to pass up here. Doing so gives the Rams two legitimate blocking tight ends and would be a boon to the run game.

He's been watched heavily by the Rams, and I don't think they let a prospect they value get snatched up right before they pick in the fourth round. 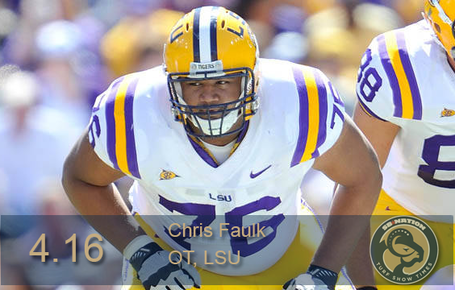 He could easily be one of the best picks in the draft- if he's healthy.

Faulk was unfortunate to have a season ending injury last year, which caused him to plummet down the draft. He was once viewed as a first round pick, possibly even the first tackle taken, but season ending knee injuries can do that to you. This pick is obviously contingent on Faulk's health, but he seems to be ahead of schedule with his rehab.

Jeff Fisher talked briefly about how he values technique in his offensive line prospects and Faulk fits right in. He has a huge frame, but he doesn't have the sloppy technique you see in some of the more gifted physical prospects.

Faulks' biggest strength is his pass protection, but his size, strength and technique make him a good fit on either side. He could easily be one of the best picks in the draft- if he's healthy. 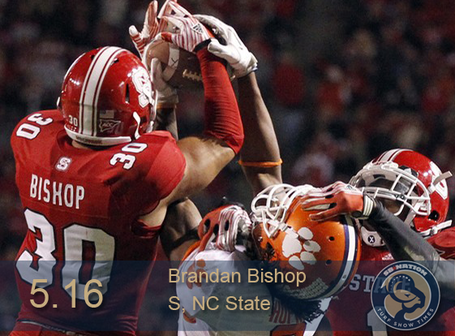 He's a solid tackler, a capable ballhawk and a smart player. You can't ask for much more from a fifth rounder.

Bishop isn't going to blow anyone away in terms of raw athleticism. He's not the biggest or fastest safety and in the fifth round, that would seem to be pretty obvious. Bishop is however, an incredibly intelligent football player.

He doesn't bite on play fakes. He's able to diagnose plays and attack the ball (he put up good interception numbers at N.C. State). He's not going to dominate you in man coverage given the freakish athleticism of today's NFL TE, but he's a solid tackler, a capable ballhawk and a smart player. You can't ask for much more from a fifth rounder. 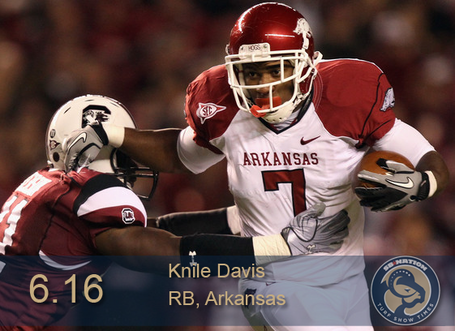 Knile Davis is somewhat of an enigma. On one hand, he had an incredible season a few years ago, and if he wasn't injured, he'd probably be a first rounder. Of course, you don't draft on alternative timelines, so here we are.

Davis has all the physical traits you look for in a running back and not only has size (6'0, 226 lbs) but blazing speed (4.33 forty). He was also a team captain, so you probably aren't looking at any character concerns. The biggest question is in his head. He clearly wasn't the same player last year and it showed, big time. 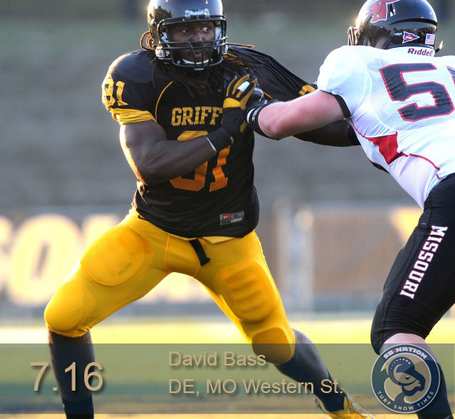 Throughout his college career he's produced to the sum of 56 tackles for a loss and 39.5 sacks- he's no slouch.

It's possible the Rams could lose William Hayes, one of, if not the best rotational ends in the league. If that happens, the Rams could use some depth at the position. David Bass is a small school prospect, but had a great Shrine Game performance and is capable enough in pass rushing situations due to his quickness

Throughout his college career he's produced to the sum of 56 tackles for a loss and 39.5 sacks- he's no slouch. You may remember the Rams last Missouri Western State draftee, Greg Zuerlein. Hopefully Bass can have the same amount of success.

This isn't the perfect mock draft and it certainly is impacted by the Jarvis Jones scenario I throw out in the first round. It doesn't address the Rams need for safety (unless you think Brandan Bishop is ready to start- wishful thinking). However, I think the Rams might find a new face in free agency, given Tim Walton's connections.

It probably won't be the most popular option, given how it ignores the top offensive line prospects, but I think the Rams would be hard pressed to find players that have more talent. Jones may not perfectly fit in a 4-3, but he's talented. Chris Faulk might have injury concerns, but there is no doubt he's talented.

The Rams need talent; one can only hope they find it in April.

Also, shoutout to Dan Doelling for the images. I couldn't use photoshop to save my life.