Four Minutes and Larry Fitzgerald Were Too Much For the Rams

With 4:31 remaning in the first half, the St. Louis Rams allowed Arizona Cardinals to march down field and score. Botched calls, missed calls, poor play, and future hall-of-famers…this drive had it all.

Share All sharing options for: Four Minutes and Larry Fitzgerald Were Too Much For the Rams

As the clock continued to dwindle down towards half - in a 7-3 [Cardinals] game - the Rams’ defense found themselves looking at 3rd and short, hoping to trot off the field after a Cardinals three-and-out, deep in their own territory. Michael Floyd - who was wide open - makes his first catch of the game [13 yards]. Floyd catches the ball five yards beyond the line of gain, while Trumaine Johnson ensures he makes the tackle by remaining three yards beyond the receiver. First down. Three minutes left in the first half.

After an incomplete pass, and then a short 1-yard pass to Larry Fitzgerald, the Rams now found themselves with another opportunity to get off the field, just after the 2-minute warning. 3rd and 9, ball at the Arizona 40. The pass would again go to Michael Floyd, who was tightly covered by Janoris Jenkins. Carson Palmer forced the ball into coverage and the Cardinals were rewarded with a pass interference call. The ball - as you can see below - appears to be thrown high…it also landed another 10 yards downfield, at the Rams’ 38-yard line. Hmmm… 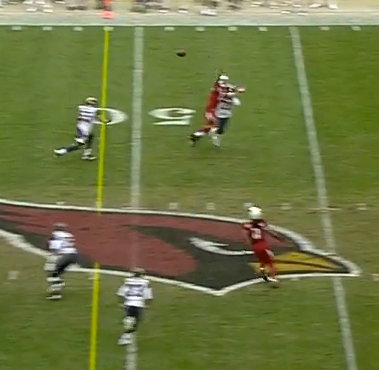 For the third time on the drive, the Rams would be facing a 3rd and short [1:11 remaining in the half]. Larry Fitzgerald - who was catching every ball thrown his way on Sunday - run an easy inside route to the line of gain, makes the catch, and is quickly tackled by Rodney McLeod. The incredible reaching catch for four yards stung the Rams, but not as much as the unsportsmanlike conduct penalty called on Robert Quinn [helmet off]. A "chippy game" appeared to have gotten the best of the Rams’ pass-rusher on 3rd down. 1st and 10 Cardinals, on the Rams’ 19-yard line [1:03 remaining].
It’s probably right about now, Rams’ fans, that you’d like to see that "missed call" I referenced [much] earlier in this post. I can understand. What I’ve laid out thus far seems more like punishment than it does recapping. At any rate, it’s still 1st down following the Larry Fitzgerald 4-yard snag. Robert Quinn, who’d had a very quiet first half, appears to have beaten his man [LT Bradley Sowell], and as you can see below, the only yellow on the screen is the arrow that I placed in the graphic. There should’ve been more yellow…in the shape of a flag.

So there’s your missed call. The good news, for Rams’ fans, is that it wouldn’t affect the outcome of the play. Oh, my mistake, there’s Larry Fitzgerald running open downfield again…being covered by Rodney McLeod. The no-call on an obvious holding allowed Palmer to step up into the pocket and find the Cardinals’ best wideout being covered by the Rams’ best…well…just have a look at McLeod in coverage on the play. "Where’s the ball?" I bet he’s wondering. 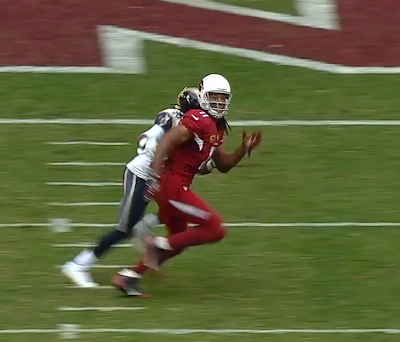 The running game hadn’t been hitting on all cylinders for the Cardinals on this particular drive, while throwing the ball to anyone with two hands proved quite efficient. That being said, on 1st and Goal, rather than attempt to punch it in, the Cardinals went with their bread-n-butter. Hello, baby, let me see that candy…

The Rams give Fitzgerald a little bit of breathing room at the 5-yard line, you know, because he’s a future Hall of Fame wide receiver and all. The problem here - for the Rams - is that Larry Fitzgerald is very good. This coverage, however, is not. He makes this play when you’re draped over his back. Standing at the goal line awaiting a guy who almost single-handedly maneuvered his team downfield is begging him to cap it off with a touchdown.

Fitzgerald didn’t disappoint on this drive. There are several things/players - for the Rams - that did. There were a myriad of errors on this drive from both players and referees, but when you put it all together, there was very little to like about this defensive "stand" for the Rams’ defense. The Cardinals then carried their momentum, and two-score lead, into halftime.