Washington lost again this week, leaving the St. Louis Rams with the second pick in the 2014 NFL Draft. With three games left to play, the Rams could still end up with the first overall pick.

Share All sharing options for: 2014 NFL Draft order: Rams still in the running for the No. 1 pick

There wasn't much to be happy about on Sunday, not for the St. Louis Rams and their fans anyway. For the second week in a row, an undisciplined Rams team lost to an NFC West rival. But the week wasn't a total loss. Washington got trounced by Kansas City, and the Rams are three games away from a premium pick in the 2014 NFL Draft.

If the draft were held today, the Rams would have the second overall pick via Washington's losing efforts. The Rams' latest loss bumps their own pick up to No. 13.

Two selections in the top 15, one in the top five ... not a bad way to inject some talent into a locker room lacking quality starters at a number of positions. 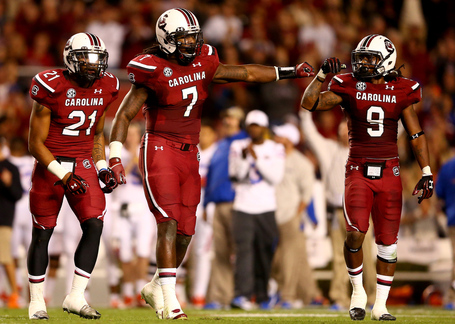 If only they could spend one of those draft picks on team discipline.

Here's the first 13 picks of the NFL draft order as it stands after Sunday's games.

The strangest thing is that the Rams could still end up with the top pick in the draft, thanks to Washington's complete dysfunction.

STL could get 1st overall pick from RG3 trade, use it on franchise QB and hire Shanahan as OC. #TheTwilightZone

Well, the last thing I'm going to do on a fine Monday morning is jump into the Rams QB debate. My feelings on that are pretty well known. Even if the Rams didn't want to get a new signal caller, they may be able to swing a deal with the first overall pick. So let's look at the chances of them winding up with No. 1.

Washington plays at Atlanta, at home against Dallas and finishes on the road against the Giants. They've lost to the Cowboys and Giants once already this season, and after watching Sunday's beat down by the Chiefs, it's hard to see them winning any more games this season.

Houston's schedule is tougher. They travel to Indianapolis next week before a home game against the Broncos in Week 16. The Texans finish on the road against the Titans. But there's something else to consider here. Houston fired Gary Kubiak on Friday. Will they get a little bump of momentum for next week's game against the Colts? It's not unusual for that to happen to teams, and the Texans do have some talent on their roster. Indianapolis has to be the favorite, but that's a vulnerable Colts team. And they could beat the Titans too.