The reason why Zac Stacy Will Reach 1000 Yards

Zac Stacy has proved that he should be the lead back for the Rams this year and beyond. But he is still chasing a very makeable milestone.

Share All sharing options for: The reason why Zac Stacy Will Reach 1000 Yards

Who would have imagined, at the beginning of the 2013 NFL season, that 5th round rookie Zac Stacy would have as big of an impact on the St. Louis Rams as he is having right now? Stacy has been a pleasant surprise ever since taking over the starting running back role in week 5 against the Jacksonville Jaguars.

Now Stacy is chasing the coming of age running back milestone: 1,000 rushing yards; a total he would have eclipsed already if he was the starter week one.

Currently, Stacy has 202 carries, 854 yards, and 6 touchdowns. These are pretty good numbers for a player who has only started 10 games this season, and especially when expectations on Stacy weren't high early. Stacy needs 146 yards over two games (73 yards) - barring injury. Which could be a problem since he's battled injuries throughout the season.

A big key to Stacy's success has been the offensive line. That's not to take away from Stacy being a good running back. His style one should remind fans of former Rams running back Steven Jackson.

Here's an example of the offensive line and Stacy working together. 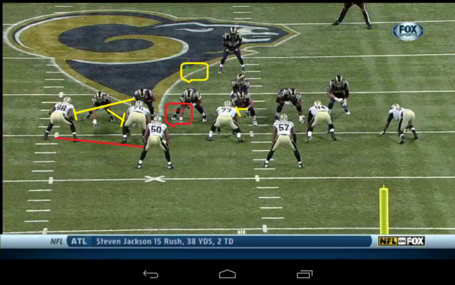 The play is a stretch type play to the right. Rodger Saffold is pulling to the right, Joe Barksdale goes behind Lance Kendricks and blocks the outside linebacker, while Kendricks blocks down on the defensive tackle. The middle linebacker - number 50 for the Saints - will follow Saffold and the flow of the play. 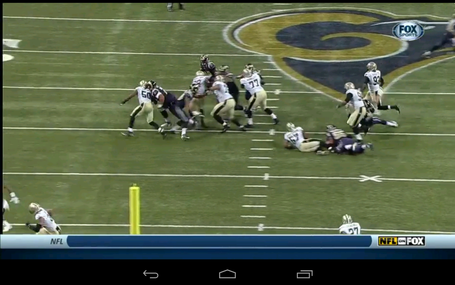 Everyone on the right is being blocked. Lance Kendricks doesn't engage anyone, but he will give the defender a push to keep him away from tackling Stacy. Rodger Saffold is handling the linebacker that followed him and not letting him attack the hole. Barksdale get's movement, but the defender eventually get's away and tries to tackle Stacy. 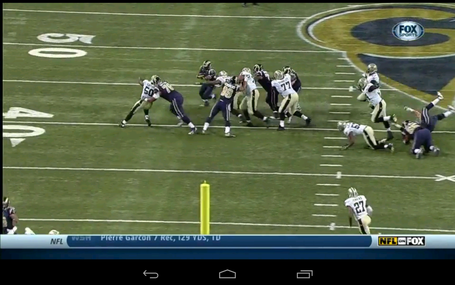 The hole has gotten bigger and Stacy makes the first defender miss. Then he's off to the races. Not shown, is Brian Quick blocking his ass off against a corner; giving Stacy one less man to worry about.

The Rams offensive line is creating holes and Zac Stacy is finding them. The Rams have a new found ability to move the ball on offense. Stacy could be special without the line blocking well for him, but the improved line play makes it that much easier, and will be the reason why Stacy will gain more than 1000 yards by the end of the season.