Random Ramsdom: Around the Turkey-Day NFL

Share All sharing options for: Random Ramsdom: Around the Turkey-Day NFL

Mike, Mike, Mike... So you were just standing on the sideline, lost in thought about Black Friday shopping, and... 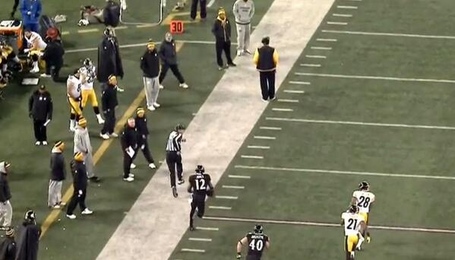 Pittsburgh lost the game to the Ravens, 22-20, in a AFC North-style slug-fest. It featured not only Tomlin's sideline antics, but some Ray Lewis imitators, touchdowns denied by the replay booth, and LOTS of field goals.

Green Bay looked awful... In a 40-10 loss to the Lions, that may be putting it mildly though, since at one point in the third quarter, the Matt Flynn led Packers has just over forty - 40! - yards of total offense. Flynn couldn't mimic his 2011 six touchdown Andy Warhol moment, fizzling Thursday going 10-20, 139 yards. Detroit's Matt Stafford and Co. had a huge day, with 561 yards of total offense.

Even though the Oakland Raiders lost 31-24 to the Cowboys, they continue to exceed my expectation. Is it just me that thinks this team doesn't stink? They're finding way to be in every game, even with their merry-go-'round quarterback situation. Matt McGloin... McGloin? He may not remind fans Raiders of former great signal callers, and his name seems more fitting for a Braveheart sequel, but his 18 of 30 for 255 passing yards wasn't bad. Tony Romo had the flu, but he and DeMarco Murray found a way to win on Turkey Day.

Someone - other than Niner Nation's Dave Fucillo and myself - actually noticed this will be the final Rams - 49ers game in Candlestick Park? The unusual fun facts of the day: Only the 49ers have played more NFL games in Candlestick than the Rams. The series at "The Stick" is tied - 21-21-1, which if you don't find remarkable, you over did the bird n' stuffing yesterday.

The Rams' three players who suffered "head bonks" against the Chicago Bears, are on track to possibly play this Sunday. But there's some disturbing news about Brandon McGee, who suffered a "foot tweak" during practice.

Have a great day of Black Friday shopping!