An big upset of the Colts last week has given the St. Louis Rams a nice boost in the advanced statistics. Can they hold on for the rest of the season?

Share All sharing options for: By the numbers: Rams showing steady improvement

The St. Louis Rams are well past the midpoint of their season, but with an upset win over the Colts and a bye week at hand, it almost feels like a new season all together, a new team in a new year. It's not. However, last week's win saw the Rams make some serious gains in their overall advanced stats.

Quick note: I'm using DVOA from Football Outsiders here. It's an efficiency measurement that looks at a team's every play and measures that against the league average based on situation, and as the name suggests, it's adjusted for opponents. Negative numbers for defenses are good, but bad for offenses. More on DVOA here.

That 38-8 win really shook up the entire DVOA rankings this week. It sent the Colts from third overall to 14th, and propelled the Rams from 26th to 16th.

St. Louis' overall DVOA went from -13.2 percent to -2.9 percent, that's right around league average (remember, the league average doesn't necessarily register at 0). Most surprising of all, that's not too far off where the Rams finished last season, with a 1.5 percent DVOA, ranked 15th among all 32 teams in 2012.

The Rams defense boasts a -1.7 percent DVOA now, ranked 15th. It's not exactly where we thought they'd rank this year, but it's a big improvement considering it was 8.6 percent, ranked 27th, after a Week 7 loss to the Panthers.

Two of the Rams' best defensive performances have come in the last three weeks. Against Indy, the defense had a -44.3 percent DVOA, thanks mostly to a rush defense that graded out at an astonishing -97.6 percent. Here's their week-to-week defensive DVOA (again, negative numbers are better for defense, so the lower points on the graph are more desirable. 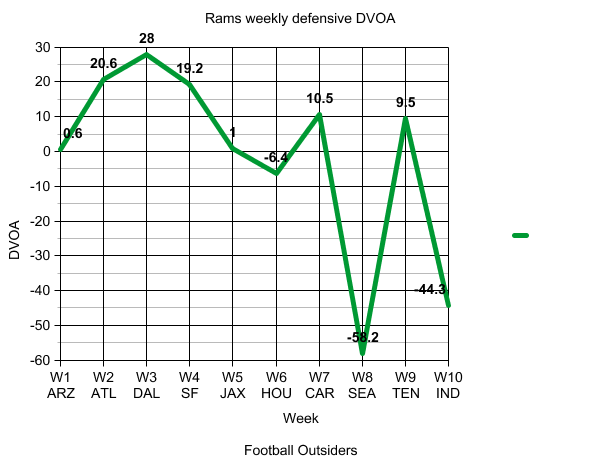 The Rams have only had three defensive performances on the negative side, the good side, but they've all happened over the last five games. Hopefully, it's a trend. One thing notable digging into the numbers is just how badly the secondary struggles when is has a bad game ... there's almost no middle ground with that group for the Rams, and that lack of consistency is a major red flag.

The defensive backs were helped out considerably last week by the pass rush, but neither Cortland Finnegan or Janoris Jenkins had a very positive game. More on that in future post.

Here's a comparison with last year's defense using DVOA, note the big drop off in pass defense this year versus last.

The Rams offense is still, well, it's still the Rams offense. Which is to say that it's not the most exciting unit in the world, but it has moments of effectiveness. I emphasize the word effectiveness, because there's only one game this season, against Houston, when it actually graded out as a top-flight group. The good news (or bad news, depending how you look at it) is that the offense has been about the same with Kellen Clemens at quarterback as it was with Sam Bradford.

Right now, the Rams offense has a -10.2 percent DVOA, ranked 26th in the league. That's not a huge change since their Week 7 loss to Carolina, which was also when they made the QB switch. After that game, the Rams offense had a -11.8 DVOA, so it has improved slightly.

Here's the week-to-week offensive DVOA for the Rams, their DVOA for each game. 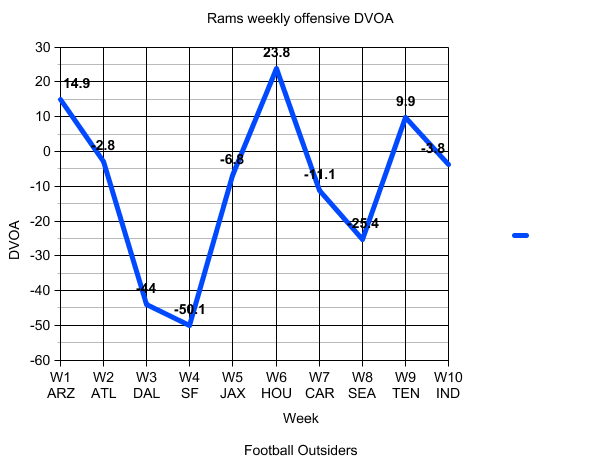 It looks a little more stark in a line graph.

Here's a look at last year's offensive DVOA numbers compared to this year's.

But there's a silver lining in that the Rams have enough to stay competitive through the end of the season. However ...

The four wins match perfectly the estimated wins using Football Outsiders' formula for that. All that says is that the Rams haven't been victims of bad luck or fluky wins and losses this season.

But let's talk about the schedule. So far, the schedule hasn't been too bad for the Rams; opponents average DVOA is -0.8 percent.

It gets harder. Opponents over the next six games have an average DVOA of 15.6 percent, making it the toughest remaining schedule of any team. That's a little tricky too. For instance, the Bears come to town in Week 12, but Chicago's recent play has tailed off. The only opponent left without a winning record at the moment is the Buccaneers, coming to St. Louis in Week 16.