My trip from New Jersey to St. Louis

Share All sharing options for: My trip from New Jersey to St. Louis

This weekend my father who has been a Rams fan for more than 60 years and myself, a 40-year fan, returned to St. Louis from New Jersey to see the Rams after a five-year absence. We had gone every year from 1998-2008, but stopped due, of course, to the continued losing. The team's success last year perked up my Dad so he booked the flight six months ago. As everyone is aware, this season has been a disappointment, and luckily I waited to buy tickets until after the 49ers debacle. I scored $160 tickets for $60 apiece in the lower level at the 40.

Like all Rams fans, I was frustrated by the 49er game and expressed that opinion on Twitter throughout the night. I received a personal note from the Rams president Kevin Demoff expressing his displeasure with the game as well and they would continue to improve and he can understand long time fan's frustrations. I then thanked him for the note and mentioned we were coming into town. He was generous enough to leave us field passes for pre-game.

We were let on to the field around 10:15 a.m. and the first guys out were the special teamers. The fans had free run around the whole field as well as the end zones. Each group slowly made their way out for warm-ups. The one thing which was odd was the receivers like to warm up on an exercise bike in the middle of all fans. Chris Givens and I joked that it felt like being at the zoo. Watching the drills it was easy to see the closest unit was the defense, very loud, physical and showed a close bond.

Jake Long is one of the biggest humans I have ever seen, and Scott Wells must be the smallest center in the league. Austin could walk down the street, just looking like a normal young person, and so small right up close. You could really feel the OL and DL power as they went through their drills. I was also right next to Long and Bradford as they had their conversation that was covered in the newspaper, about Sam leading the pre-game huddle. Chris really was trying to pump him up and honestly seems to easily be the leader of this team. To say Sam looked comfortable would be a bit of s stretch; I guess for some that is not their thing.

The freedom they give you is incredible, and being within 2-5 feet of almost every player was one of the best sports experiences I have had in my 44 years. They then asked everyone to leave the field about 15 minutes before the game, I lingered a bit and got to meet with Demoff. I thanked him for the tickets as well as passed along some of my current concerns. The team may struggle, but he seems to get it and doing his best to turn it around. He was very confident about a win on Sunday. I then was able to take a few pics on the Rams bench as well as have a conversation with the Rams GM Les Snead, another very nice guy who listened to my concerns on the current team and expressed confidence that it will be turned around. I mentioned using one of two first-round picks next year on a QB as it is so deep in 2014, he sort of gave me a confident smirk. Finally on my way out I ran into the infamous Tony Softli with whom I also had a great conversation.

Now on to the game. I am going to break it into 3 parts for what I saw live in offense, defense and special teams.

Here are a few pics: 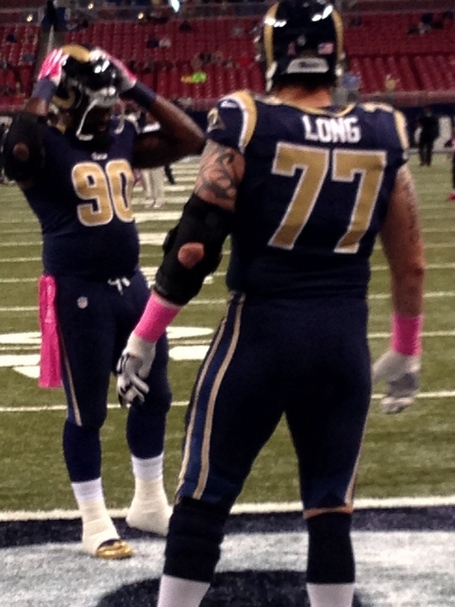 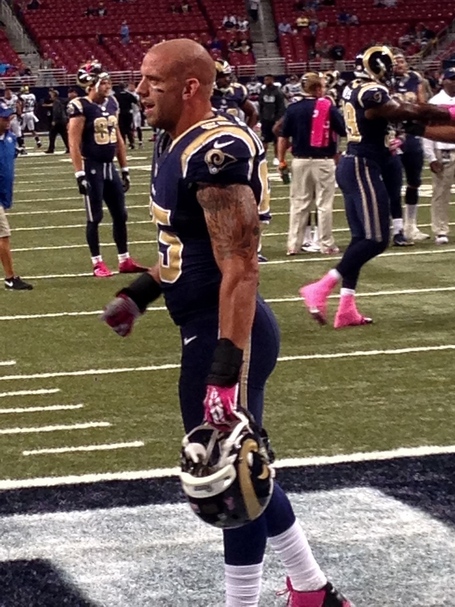 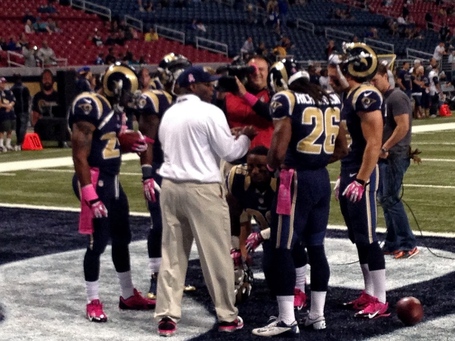 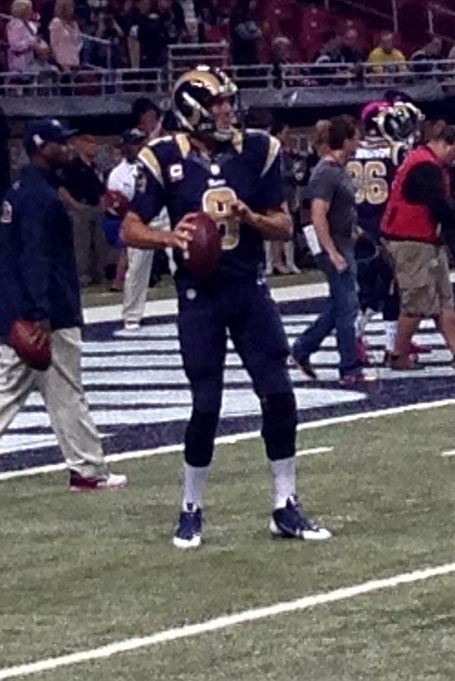 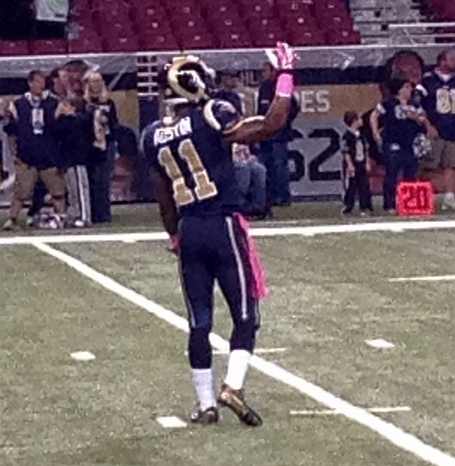 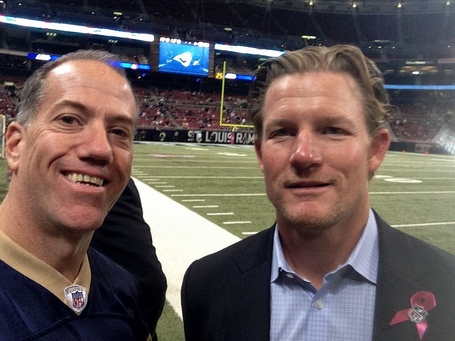 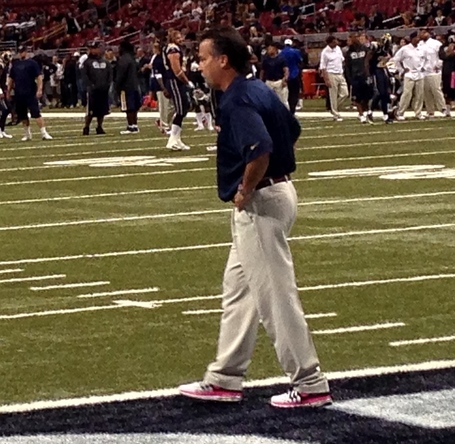 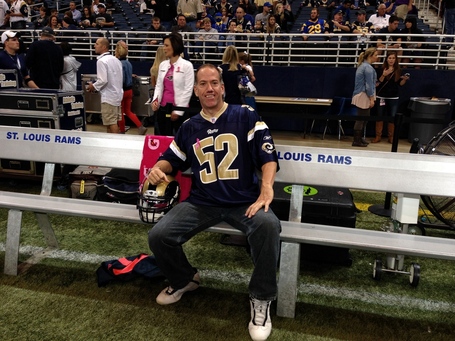 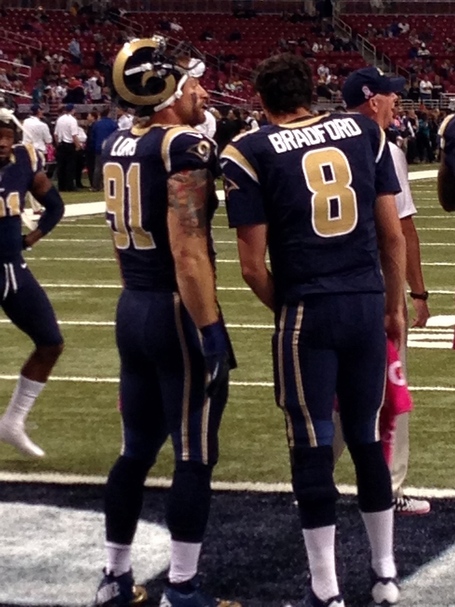 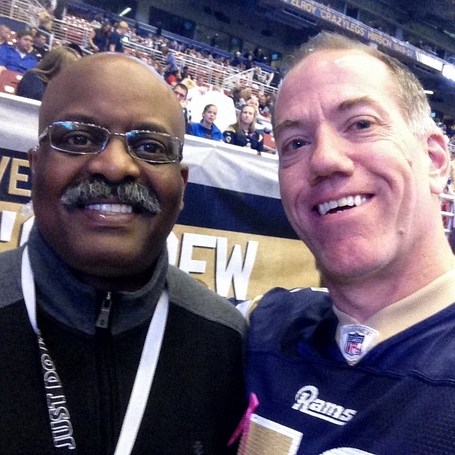 Zac Stacy was the best part of the game on that side of the ball. He ran hard between the tackles, got dinged up and Dayl Richardson came in. For some reason they continue to run him only inside, and he never got a chance outside on a toss or sweep I do not understand why that is the case. The OL as a whole played pretty well, giving Sam plenty of time and the backs some decent push for the first time all year. Some of that could have been their opponent this week.

The receivers had a good week minus the drops. I made sure to focus on them down the field. On at least 13-15 plays, Cook, Givens, Quick or Austin were all open 15 plus yards down the field, but only a few passes traveled over 20 yards in the air. The only deep one was underthrown, if Givens was led 3 yards more it was a touchdown. It was interesting that Cook had the least snaps of all the tight ends and Austin had the least of the receivers. You could see some frustration on the field at times when they were open but the pass was thrown underneath. Pettis is by far the most trusted receiver for Bradford, and is showing some of the skills he did in college.

The only big change was Harkey playing a ton of fullback. He is a very willing blocker and had one drop which was a major issue in college but then had one nice gain.

Finally the QB, Bradford was a solid game manager. The Jaguars, like all teams this year, played the receivers very tight within 10 yards and seemed to know on the third down where the ball was going. Sam seems to get back, hit the back foot and throw to first read more than half the time. He's not looking down the field at the receivers who were coming open. I wonder if this is by design or is it all on Bradford? You can see why so many balls are tipped because teams know a short pass is coming quick just by looking at Bradford. He did a great job not coming close to an interception and throwing safe passes, but it will get harder and harder if the QB and coaches do not take advantage of the speed on this team. Bradford showed on the touchdown to Pettis he has it in him to throw accurate and deep. Everyone is seeing way too little of it in games against good teams when the score is close. On Sunday, if the offense was opened up a bit they could have scored 40 or more with the plays that were out there.

We will start with the defensive line. This was the best game by Chris Long of the year, and as a whole, they played well. I expected more, especially with both Jaguars tackles out. They should have been the dominant group they were hoping to be in the preseason. The Jaguars left a ton of big plays out on the field, and even got their dormant run game going.

The Rams were in nickel most of the game so James Laurinaitis and Alec Ogletree were very active. Ogletree is so athletic and once he gets himself under control and gets the basics down, he may be this team's defensive draft pick in years. Both linebackers continue to struggle with hitting the right gaps on blitzes against the run and pass.

Finally, in the secondary, I think there are a few issues. Jenkins was playing his guy in a close man all game. Johnson was 10 yards off on almost every play. I'm not sure what the plan was with different philosophies on each side of the field because Jaguars receivers were open everywhere. If they had a solid QB, they could have scored 35 or more as well. McLeod was playing the slot. He puts in the effort he should be playing that role. However, if Brandon McGee cannot do it, they need to bring in a cornerback. It will be very tough to stop even the Jaguars passing attack with three safeties on the field in all passing situations.

It is amazing that this team continues to be just awful taking yards off the field with penalties. Those are basic concepts from youth football. Running into a fair catch is an unspeakable act. The blocked punt was an instance where the Jaguars out schemed the Rams on an easy rush up the middle. A team like the Rams cannot continue to play like this on special teams. This group has nowhere to go but up.

You can see Austin's continued frustration on the field.

Any win is good for a franchise like the Rams. However, the Jaguars are one of the worst teams in NFL history, and for the Rams to win against even average teams, the offense needs more flexibility and risk taking. The defense needs better communication as they seem disorganized on many presnap calls. The penalties also need cleaning up, and if they are not, this team will have a hard time getting anywhere close to last year's seven wins.

It was a great weekend. I am thankful to Kevin Demoff for making it a trip to always remember.