Jeff Fisher and the St. Louis Rams will host his former team - the Tennessee Titans - this Sunday. For the Rams, a third straight loss would be horrifying. But if you thought nothing was scarier than a corner fade on 4th down of a Monday Night Football game, you’d be dead wrong! Happy Halloween 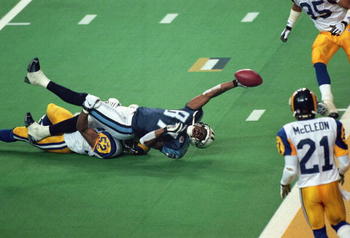 Gil Brandt Pinpoints Which NFL Teams Can Boast Their Drafts…and Who Cannot: NFL.com

You remember Gil Brandt, don’t you? He’s the guy who had the Rams taking Eddie Lacy with the first of their two first round picks in the most recent draft. Not to say he would’ve been right, but Lacy is arguably the offensive rookie of the year at this point, and the Rams - until recently - struggled to run the ball. All of that aside, Gil pinpoints which teams can feel proud about their draft selections…and a few who might be scratching their heads.

Midseason Predictions For the NFL’s MVP, Rookie of the Year, and More: NFL.com

At the halfway point of the NFL season, the NFL.com staff predicts the winner of the league’s major awards. Peyton Manning, surprisingly, isn’t the unanimous winner. Even more surprisingly, one Rams’ player gets a mention…

If you had to pick just one Rams player who you’d put on the NFL's Midseason All-Pro Team, who would you select? Well, Elliot Harrison picked one, and I’m betting you could guess. I’ll give you a hint. He had 10.5 sacks in 16 games last year. He has 10 sacks in eight games in 2013.

We’ve hit the halfway point of the NFL season and soon we’ll be discussing bubble teams and playoff berths. For the Rams, they’re quickly finding ways to elude that discussion. St. Louis were long shots to make the Super Bowl prior to the season. They’re almost at a point where "odds" become "OFF."

Jake The Snake Picks The Rams Over The Titans: CBS Sports

You could rely on someone like Adam Schefter or Chris Mortenson for the NFL’s Week 9 winners. You could also look to a real expert. Someone like, let’s say, Jake "The Snake" Roberts. He’s picking the Rams over the Titans this week. If for nothing else, click this link solely for the purpose of some good ‘ol fashioned WWF wrasslin! And by "wrasslin" I mean a beautifully executed DDT, pulling a man’s pants off, then attacking Andre the Giant with a boa constrictor.

Sticking With Kellen Clemens The Right Move For The Rams: ESPN

If you had to ‘think fast’ decision on which Rams player you liked after last Monday’s loss to the Seahawks, I bet many of you would declare Clemens, without hesitation. The throw…the play call… all of it was ugly. But with that being said, the Rams are still planning on starting Clemens this Sunday. Nick Wagoner says it’s the right thing to do.

Golden Tate Can Negate His Own Touchdowns In 2014: Pro Football Talk

On Monday night, Golden Tate waved bye-bye to Rodney McLeod as he ran 80 yards for the score. The touchdown counted, but the unnecessary hand gesture cost his team 15 yards on the ensuing kickoff. Big deal. The NFL’s Competition Committee is exploring a harsher punishment, though, which would include enforcing the 15 yard penalty…right after nullifying the touchdown. Ouch.

For the second straight week, the Rams found themselves in a game where headlines were formed around the action[s] of a players, and not necessarily for the mature manner in which they conducted themselves. Steve Smith would do bodily harm to Janoris Jenkins if he were to bump into him in the streets. Staying in the Rams secondary, Golden Tate felt it necessary to show off on his way to the end zone last Monday night. The Rams can’t seem to escape it [though they’re certainly not free of blame]. Who should you expect to see/hear from in this weeks matchup vs. the Titans?

Though disappointed with the outcome of the previous evening, Head Coach Jeff Fisher took on an encouraged tone while assessing his team’s performance during the Rams’ 14-9 loss to Seattle on Monday Night. Fisher addressed the Rams’ improvement on the ground, which included 200 total rushing yards, including a career-high 134 from rookie RB Zac Stacy.

This game is so many things. It’s Jeff Fisher’s first game against his former team. It’s military appreciation day. The Rams will be wearing some sweet throwback uniforms. Oh, and country singer Billy Currington will soothe your soul with his music. 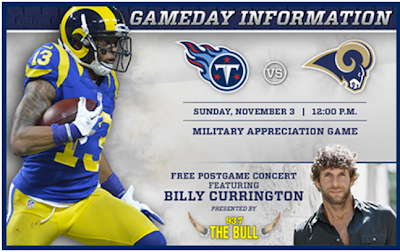 The Numbers Don’t Compute In Rams Loss To Seahawks: St. Louis Post Dispatch
The Rams held the Seahawks to 135 yards of total offense on Monday night. 80 of those yards - as you might painstakingly remember - came on one play. They lost. Yeah.
The Rams Final Play [on Monday] Debated: St. Louis Post Dispatch
"It was the play selection. It’s what we felt gave us the best chance to score a touchdown." - Jeff Fisher
Redesigning NFL Logos Based On Their Play Thus Far: Football Nation
Week 8 has come and gone putting us squarely in the middle of the NFL season. Some teams are rounding into playoff form, others are finally gaining traction heading into the second half, and many more teams are already prepping for the offseason since things haven't exactly gone well thus far.
Week 9 Expert Picks: SB Nation
It would appear the Cowboys and Packers are locks to win this week. It’s a different story for the Rams.
The All-Rams’ Midseason Awards: Ramblin’ Fan
Let’s face it. Aside from Peyton Manning, you could probably make the case that every player on the Rams’ roster should be in consideration for a midseason All-Pro team. You could also be delusional. Regardless, you’re not going to find any Rams - outside of Robert Quinn - getting much notice. Even kids on losing teams get trophies in youth leagues. Ramblin’ Fan hands out some hardware…
A Never-Too-Early 2014 NFL Mock Draft: Walter Football
Not straying far from previous picks, the Rams [who are still picking after the Redskins with their 1st] go left tackle, safety, and cornerback with their first three selections. Do you agree they should address those first? Should they be addressed in that order? Do you like those players? With two high draft picks, should we expect more trading down in 2014?
Jeff Fisher Downlplays Matchup Vs. His Former Team: The Tennessean
Jeff Fisher will never forget about his past with the Titans, not that he wants to. He’s reminded of it daily inside the St. Louis Rams facility, where the franchise’s only Super Bowl win - against the Titans - is glorified with photos and memorabilia.

Tom Brady dressed as the Cowardly Lion for Halloween. And though his Ugg[ly] boots were left out of this photo, his supermodel wife was not. Things are rarely bad for Tom Brady…

And If You’re Wanting To Be Extra Spooky This Halloween, Here Are A Few Hauntings From The Rams' Past…